Anyone who follows college football knows about the intense rivalry between Michigan and Ohio. But few realize that this enmity dates all the way back to the 19th century, when a dispute over the city of Toledo almost led to an armed conflict. 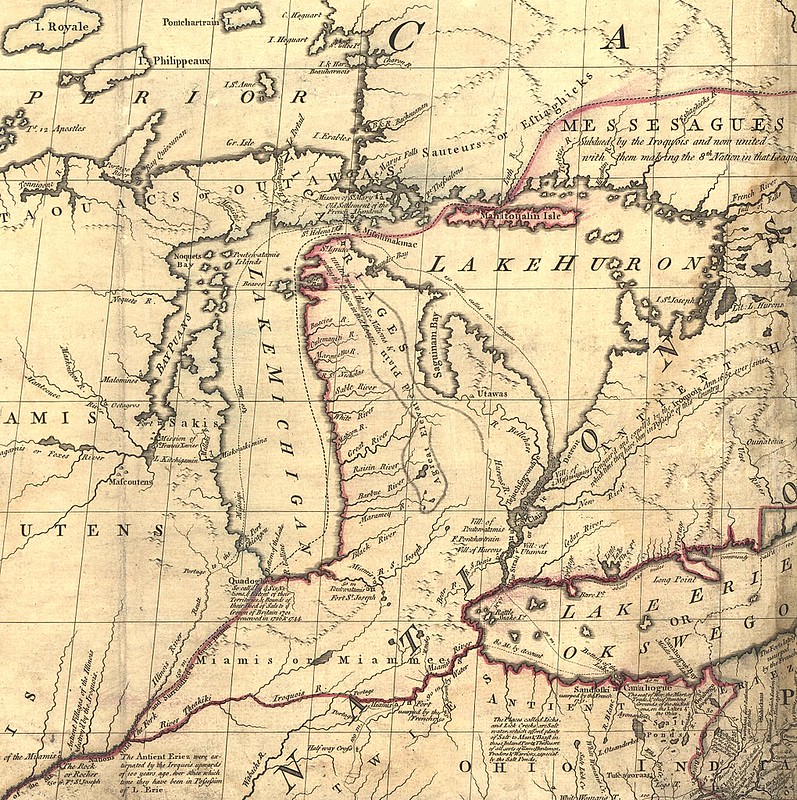 The map that started it all

In 1787, Congress passed the Northwest Territory Ordinance, which set out the conditions for admitting a series of new US States from the area around the Great Lakes. Under these rules, five States would eventually be admitted into the Union. Two of them were Michigan and Ohio.

Under the terms of the Ordinance, the border between these territories was set as a line extending straight east/west from the southernmost tip of Lake Michigan. But in 1803, new surveys resulted in a more accurate map—and an awkward problem. Lake Michigan, it was discovered, did not actually extend as far south as the original maps indicated, and this meant that a narrow strip of land which had been assigned to Ohio, was actually part of Michigan. And although the area in question was small (only 468 square miles and less than 8 miles at its widest point), it contained something important—the port city of Toledo.

Of the two territories, Ohio was the first to apply for statehood, and when she did, she made a deft sleight-of-hand move. Arguing that it had clearly been the intent of the Ordinance to provide the new State with a port at the mouth of the Maumee River, Ohio, in her proposed State Constitution,  simply changed her boundary, describing it as a line extending from the tip of Lake Michigan towards the Maumee—where Toledo was located. When the US Congress admitted Ohio as a state in 1803, however, it simply ignored Ohio’s unilateral border change, and in 1805, when the Territory of Michigan was formally organized, Congress confirmed that the border between the two remained as specified in the 1787 Ordinance—meaning that Toledo was actually inside the boundaries of Michigan Territory.

After a time, Congress sent an expedition to the area to formally survey the official border, but this was then delayed by the War of 1812. In 1817, a new expedition was organized, but the Surveyor General was Edward Tiffin, a former Governor of Ohio, and he instructed his teams to draw the border not as it was described by the Northwest Ordinance, but as it was spelled out in the Ohio Constitution—thereby placing Toledo back inside Ohio. Michigan’s Territorial Governor cried “Foul!” at this, so in 1817 another survey team was sent, this time setting the border line straight east/west. Once again, Toledo was a part of Michigan.

Although the political squabble over the “Toledo Strip” was an annoyance for Congress, its importance expanded enormously in 1825. In that year, the Erie Canal was completed, allowing cheap water-borne transportation from New York City to the port of Buffalo on Lake Erie. The Ohio state legislature approved a plan for a network of new canals that would connect the state’s industrial cities to the Maumee River, which emptied into Lake Erie and went on to the Erie Canal. This meant that the little lakeside port of Toledo would be at the center of a vast trading hub, and would inevitably become an important commercial harbor. And now both Michigan and Ohio pressed their claim to it.

In 1833, the Michigan Territory formally petitioned Congress for admission as a State, and the border dispute over the Toledo Strip became a pressing matter for the Federal Government since there could be no Statehood before a firm boundary was set. In the end, things reached a stalemate: the House of Representatives upheld Michigan’s legal claim under the Northwest Ordinance, while the Senate, under political pressure from Ohio, supported the border set by the Ohio State Constitution. Michigan offered to concede all the rest of the disputed territory if it were allowed to keep the city of Toledo: Ohio rejected this outright.

After two years of haggling, Ohio took matters into its own hands. The State Legislature passed laws establishing the disputed area as Lucas County—part of Ohio—and set up its own local governments there, running courts and collecting taxes. Michigan’s Territorial Legislature, in turn, passed a law of its own, the “Pain and Penalties Act”, which asserted its own sovereignty over the area, set up its own local governments, and made it illegal for any resident to advocate Ohio’s claims. To enforce this provision, Michigan moved 1,000 of its militia troops into Toledo. Ohio promptly deployed 600 of its own state militia. Both sides eyes each other along the banks of the Maumee River.

Then two incidents happened which almost led to armed conflict. First, a border survey party from Ohio encountered a unit of Michigan militia, who ran them off by firing shots over their heads. At around the same time, a sheriff from Michigan tried to arrest a Toledo resident named Benjamin Stickney for voting in an Ohio state election in violation of the Pain and Penalties Act. Stickney’s sons—who had the wonderfully unlikely names One Stickney and Two Stickney—resisted, and Two Stickley wounded the sheriff with a pocketknife. Tensions reached a fever pitch.

It now fell to President Andrew Jackson to deal with the matter before it turned into open shooting. Legally, there was little to dispute: the 1787 Ordinance had set the boundary, Ohio’s unilateral alteration had no legal validity, and the Toledo Strip was clearly a part of Michigan Territory. But Jackson was up for re-election soon, and he knew that political considerations had to enter the picture, and here the argument was also pretty clear: as a State, Ohio had a large number of representatives in Congress and electoral votes, and as a mere Territory, Michigan had none. Jackson, knowing that he could afford to snub Michigan but could not afford to snub Ohio, made his decision: Ohio would get the Toledo Strip. To make the “compromise” more palatable for Michigan, the new State was offered the “Upper Peninsula” in exchange. In Michigan, people grumbled that the “new land” contained nothing but ice, wolves, and bugs, but they had no choice but to accept. Michigan was admitted as a State in January 1837.

Border arguments and disputes between the two states over water rights on Lake Erie continued until a Supreme Court case in 1973 settled the matter for good. Today, the lingering hard feelings over the Toledo War continue only on the gridiron.

But in the end, although Michigan lost Toledo, it won the War. The Upper Peninsula, which had originally been dismissed as a frozen wasteland, turned out to have huge and valuable deposits of copper and iron, worth billions.

One thought on “The Toledo War”