One of the deadliest political riots in American history happened on an Election Day in Louisville KY. 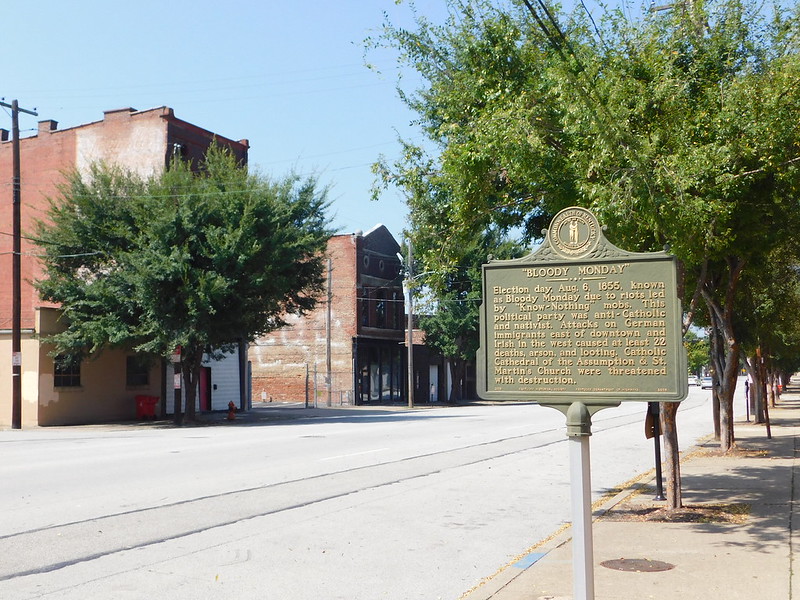 In 1850s America, the political stage was in chaos. The two major parties, the Democratic Party and the National Republican Party, hated each other with a venom that was seldom seen again until the 1990s. The Democrats, who had been formed out of the election of Andrew Jackson in 1828, favored a strong central government that was led by a strong President. The National Republicans (which despite their name are not the ancestor of today’s GOP) formed shortly afterwards in opposition to Jackson; they favored a weak central government that was led by Congress.  They became known by the nickname “Whigs”.

But in 1852, the Whigs split over the issue of slavery, and after a bitter period of infighting, the Party collapsed. Out of its remnants came the American Party, which organized itself around the principle of “nativism”: it was anti-immigrant, anti-Europe, anti-Catholic, anti-labor, and anti-Black. Because the Party’s members were instructed to answer any inquiries about their aims or actions with “I don’t know”, they became branded as the Know-Nothings.

The Know-Nothings were particularly successful in Kentucky; a “border state” between North and South, Kentucky was deeply polarized over the issues of slavery and state’s rights, and the Know-Nothings found fertile ground. In the 1840-1850s, a wave of immigrants arrived in the US from Europe. In particular there were large numbers of Irish who were fleeing the effects of famine and political repression, and Germans who were fleeing the aftermath of the unsuccessful anti-monarch revolutions of 1848. Both groups drew special hatred from the Know-Nothings: the Irish Catholics were condemned as “Papists” who would impose a theocracy run by the Pope, and the Germans were political liberals (many of them were socialists) who would destroy the American Way of Life.

Louisville KY, the largest city in the state and the tenth largest city in the US, became a battleground. On the one hand, as a major trading port and industrial center, the city attracted thousands of Irish and German immigrants as laborers, who quickly became well-organized and exercised considerable political influence. On the other hand, the Know-Nothings also had a well-run political machine, and had elected their own John Barbee as Mayor.

The new elections were scheduled for August 6, 1855. It would be a bitter contest. The Irish and German organizations encouraged everyone to go to the polls and make their numbers felt. The Know-Nothings responded with threats. In particular, the editor of the local Louisville Journal newspaper, a respected author named George Prentice, launched an acid attack campaign on the immigrants, with editorials every day condemning the “most pestilent influence of the foreign swarms”. On the very morning of the election, Prentice had screeched, “Let the foreigners keep their elbows to themselves to-day at the polls. Americans, are you all ready? We think we hear you shout ‘ready,’ well, ‘fire!’ and may heaven have mercy on the foe.”

As the polls opened, things quickly went bad. Whether by design or by poor planning, there were not enough polling places in the poor immigrant neighborhoods, and voters had to stand in long lines. Here they were faced by “poll-watchers” from the Know-Nothings—many of them armed—who, under the eyes of the police, began turning away foreign-born citizens and refusing to allow them to vote. Gangs of Know-Nothings soon began roaming the streets of Louisville, attacking and beating any Germans or Irishmen they came across. Several people were killed.

In response, some immigrants resorted to taking potshots at the mobs from the windows of buildings. The Know-Nothings, in turn, formed armed vigilante gangs and swarmed into the immigrant sections of town. In an Irish neighborhood on Main Street known as Quinn’s Row, they set an entire block of tenement rowhouses on fire, and shot anyone who tried to escape the flames. In the German district on Shelby Street, they attacked and destroyed several coffeehouses and breweries, and dragged a number of people into the streets and killed them.

By now even the Know-Nothing Mayor of Louisville, John Barbee, decided that the mobs had gone too far and were out of control. When a crowd gathered around the St Martin of Tours Catholic cathedral, shouting that it contained weapons and armed German immigrants, Barbee himself went inside to look and, informing the horde that the building was empty, persuaded them to spare it.

The violence continued into the night. The official death toll was 22, but estimates on the ground ranged up to over 100. At least 100 buildings had been damaged or destroyed. It became known as “Bloody Monday”.

In the aftermath of the riot, the Irish and German communities abandoned the city in droves. Over 10,000 people fled to St Louis, Milwaukee, or Chicago. The mass exodus had a crippling effect on Louisville, leading to a labor shortage, a reduction in the tax base, and a collapse of the city’s industry: some historians point to this as one of the causes for Louisville’s subsequent decline as a major economic center and its eclipse by other industrial river ports like Cincinnati.

Much of the blame for the bloodshed fell on newspaper editor George Prentice, who had stoked the flames of hate and violence with his editorials. Louisville’s other newspaper, the Courier, pointed the finger straight at Prentice: “The Journal knows full well where this responsibility belongs. To its incendiary articles continued day after day before the election, and its violent appeals on the morning of the election, articles and appeals calculated to bring into active exercise all bad passions of the human heart.”

Dozens of people had been arrested during the riot—most of them Irish and Germans who were trying to defend themselves. Five Know-Nothings were later indicted for arson and murder, but none was ever convicted. The tainted election results were overturned by court order.

Within a couple years, moreover, the Know-Nothing Party was itself gone: when the new Republican Party was founded on an anti-slavery platform, it caused a major realignment in American politics. The Democrats became the pro-slavery bloc, the Republicans were the anti-slavery faction, and the remnants of the Whigs and Know-Nothings divided themselves up between them. Many prominent Know-Nothings would go on to join the anti-Catholic Ku Klux Klan after the Civil War. In 1865, by contrast, after the return of many immigrants to the city at the end of the Civil War, a German-American named Philipp Tomppert was elected as Louisville’s Mayor.

Decades ago, the city had a statue of George Prentice erected in front of the local Public Library, in recognition of his literary career. Later, after calls for the memorial to be removed, a compromise was reached in which a new plaque was added, describing his role in inciting the Bloody Monday riots. Today, a pair of historical markers, one on Quinn’s Row and the other at the St Martin church, commemorate the Bloody Monday riots. The Irish fraternal organization Ancient Order of Hibernians and the German-American Club also commemorate the anniversary with a street procession.

One thought on “Louisville’s Bloody Monday”