In the middle of the 19th century, the United States faced a war with a breakaway religious cult that was attempting to establish its own theocracy. 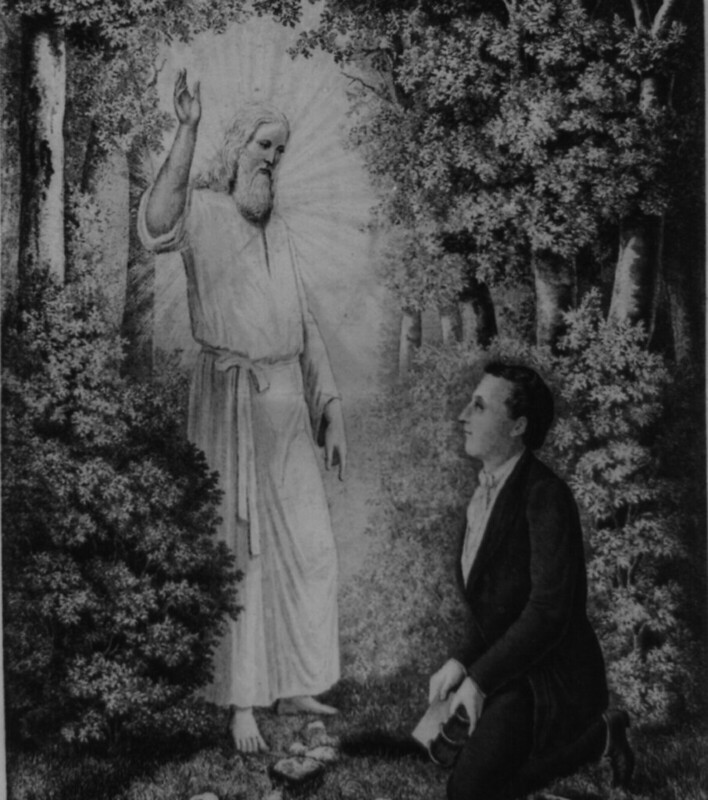 The angel Moroni delivers the Book of Mormon to Joseph Smith

In the first decades of the 19th century, a new religion appeared in North America. According to legend, a western New Yorker named Joseph Smith was visited by an angel and was given a set of golden tablets titled the Book of Mormon, written in an unknown language that only he could translate. The holy text instructed Smith to form a new church, one that would reconstruct the original Church of Jesus. Smith called it the “Latter Day Saints”; it soon became known as the Mormons. Smith, a charismatic speaker and leader, gathered a following of several thousand.

The local communities, however, considered the new church to be just a strange cult, and hostility towards the group led them to leave New York in search of an area, to be known as “Zion”, where the Church could live by itself, separated and isolated from what it considered a sinful world. Smith and his followers settled first in Ohio, then in Missouri. But they were met with distrust and hostility everywhere they went. Partly this was the result of the church’s doctrines (especially the Mormon institution of polygamy), which most “gentiles”, or non-Mormons, considered odd: partly it was the result of Mormon efforts to gain political control in areas where they settled. Local residents found themselves outnumbered and outvoted, and the disciplined Mormons, who considered their leader and laws to be divinely ordained by God, established what was in effect a tiny theocracy.

Angry locals soon drove them out. In 1832, a vigilante group in Ohio went to far as to tar and feather Joseph Smith, and when the Mormons moved to Missouri in 1832, their settlement was attacked by local farmers armed with shotguns. In October 1838, Missouri’s Governor announced that the Mormons were to be considered as rebels and outlaws, and their efforts to establish theocratic rule were to be opposed. Four days later, Missouri state militia forces surrounded one of the Mormon settlements at Haun’s Mill and attacked. Seventeen unarmed Mormons were killed, and the rest fled to Illinois.

Here, at a town they named Nauvoo, the Mormons once again attempted to separate themselves from the larger society and live under their own religious laws. It soon became the second-largest city in Illinois. The massacre at Haun’s Mill, moreover, had altered the attitude of Joseph Smith. Determined that such an attack would never happen again, he decreed the formation of the “Nauvoo Legion”, an armed militia with around a thousand men that was in effect a private religious army, under Smith’s direct command. One of its first tasks was to shut down a local newspaper which had been criticizing Smith and the Mormons.

This was a situation that the state government could not tolerate, and hostility grew. In response, in 1844, Smith declared himself a candidate for President of the United States—a move that angered many who saw it as a naked attempt to impose Mormon law under a theocracy. Smith was arrested by state militiamen. A few days later, fearing that he would be released, a mob of local vigilantes broke into the jail and killed him in his cell.

Leadership of the Mormon Church now fell to a carpenter from Vermont named Brigham Young. Young, in turn, declared that the Mormons would never be able to peaceably live anywhere in the United States, and decided to move the entire group out west to the area around the Great Salt Lake, in territory that nominally belonged to Mexico but which was sparsely populated, mostly by Paiute Indians. Here, a thousand miles away from the United States Government, the Mormons would build their new Zion at Salt Lake City and await the imminent Second Coming of Christ.

History, however, had other plans. In 1846 the United States invaded Mexico, and upon her surrender in 1848 the Americans obtained nearly half of Mexico’s territory—including the area where the Mormons had settled. In 1850 all of the Mormon settlements, some 40,000 people in all, became incorporated into what was known as the Utah Territory. Brigham Young, the only person in Utah with any real authority, was reluctantly appointed Territorial Governor by President Millard Fillmore.

Once again, though, US law was in conflict with the theocratic ideals and religious practices of the Mormons. Lurid stories in the national press condemned the “sex cult”, and in 1856 newly-elected President James Buchanan decided that he had to enforce the laws of the United States and end the theocracy in Utah, replacing Brigham Young with a Governor of his own choosing. In July 1857, Buchanan dispatched 2500 US troops from Kansas to accompany the new Governor. It was a declaration of war.

In Utah, Brigham Young had his well-equipped militia of 3000 men, but he knew that he could not win an all-out war against the United States. And so, although he called out his militia and equipped them for combat, he issued strict instructions that they were not to engage the American troops unless they were first attacked. But for many Mormons, who had already been driven halfway across the continent to the very edge of civilization, there was a strong sentiment that they would retreat no further, and they would fight to defend their church.

And then, in the midst of all this tension, a wagon train bound for the gold fields of California reached the edge of Utah Territory. Led by Alexander Francher, the group consisted of 140 people, most of them from Arkansas. They had no idea they were entering what had become a war zone.

Local Mormon leaders sent a messenger to Salt Lake City to ask Brigham Young what they should do. But then, for some reason, they decided to not wait for an answer, and to act on their own. Approaching the local band of Paiute Indians, who also had no love for white invaders into their lands, the Mormons organized an ambush.

In September 1857, a Paiute war party accompanied by Mormon militiamen attacked the Francher wagon train as it was encamped near the Mormon settlement at Cedar City. About a dozen of the migrants were killed. The rest set up a defensive circle of wagons.

They were then approached by local Mormon leader John Doyle Lee, who offered an escort of militia to protect them through the hostile Indian territory. It was a trap: once the Francher settlers laid down their rifles, the Mormons slaughtered them: only a handful of young children were spared and taken as captives.

The next day, a messenger arrived from Salt Lake bearing Brigham Young’s instructions: since attacking the wagon train would provoke a response from the United States, they were to be left unharmed and allowed to pass through.

It was too late.

With American troops just days away, the local Mormons decided to submit false reports blaming the Paiutes for the massacre and denying any Mormon involvement. (It is still not clear whether they even told Brigham Young the truth about the attack, or whether they lied to him as well.)

Young, in turn, ordered his militiamen to attack the approaching Americans. The Mormons surprised the US Army baggage train and, without firing a shot, captured and burned it. Without their supply train, the US troops endured a couple months camped in the cold winter before withdrawing to Wyoming. Meanwhile, plans were being made to send another 3000 troops, under Mexican War hero General Winfield Scott, to deal with the “Mormon Rebellion”.

Before Scott could set out, President Buchanan sent Colonel Thomas Kane, who knew Brigham Young, to Utah to try and negotiate an end to the situation. By June 1858, an agreement was reached: the Mormons would give up their theocratic government and accept US jurisdiction over the area, they would follow all American laws including those against polygamy, and they would disband their illegal militia. The US would leave troops in Utah to maintain order, but would not attempt to station any soldiers inside Salt Lake City. Finally, the United States would issue pardons for all the “rebels”—with the exception of those who had participated in the Francher Massacre.

In the end, the Mormons refused to cooperate with the investigation, and John Doyle Lee, though not captured until years afterwards, would be the only person prosecuted for his role in the Francher massacre. With no Mormon jury willing to convict him, his first trial ended in a hung jury. After that, in an effort to end the probe, Lee was offered by Brigham Young as a “sacrifice”, and under Church orders, a new all-Mormon jury voted to convict him. In 1877, twenty years to the day after the massacre, John Doyle Lee was escorted by US troops to the site, where he was executed by a firing squad.

Five months after that, Brigham Young died of natural causes. Over the next few years, a series of Supreme Court decisions upheld laws that outlawed many Mormon religious practices. In 1892, the Church formally renounced polygamy, and in 1896, with the Federal Government finally convinced that the Church had lost its political grip, Utah was admitted as a State.

2 thoughts on “The Mormon Rebellion”