In February 1942, in the middle of the night, batteries of anti-aircraft guns opened fire in Los Angeles to defend the city against a Japanese air raid. Over 1,000 shells were fired and up to six people died. But in reality there was no enemy there, and all the shooting was directed at nothing at all. 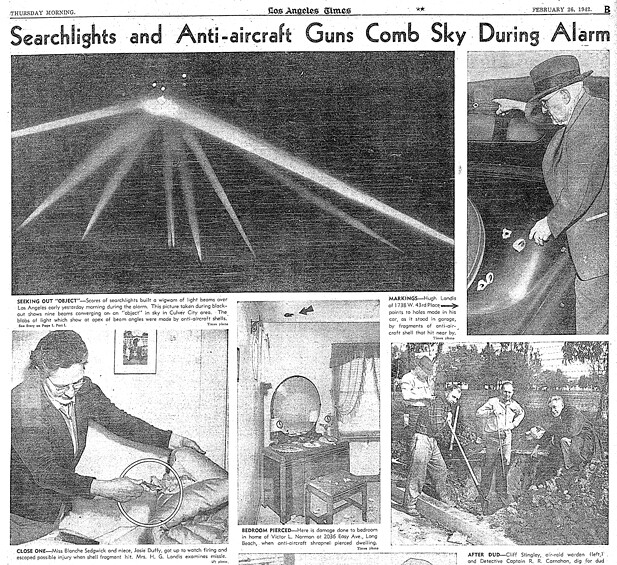 Newspaper coverage of the “Battle of Los Angeles”

In February 1942, the entire west coast of the United States was jittery and nervous. The Japanese had launched a surprise attack on Hawaii just two months previously, plunging an unprepared nation into war. Japanese troops quickly swarmed through the Pacific, capturing territory from Singapore to the Philippines and presenting the image of an unbeatable military machine. Panicky Americans, scared out of their wits and fearing new attacks on the United States itself, hastily installed anti-aircraft batteries and fighter bases along the west coast from Seattle to San Diego, and hurriedly drew up plans to lock up the entire Japanese-American population in makeshift prison camps in the desert.

At 7pm on February 23, 1942, President Franklin D Roosevelt began one of his “fireside chat” radio addresses to the nation, in which he both tried to reassure his unnerved country and also warn them that “the broad oceans which have been heralded in the past as our protection from attack have become endless battlefields on which we are constantly being challenged by our enemies.” In an intentional attack while Roosevelt was giving his speech, the Japanese submarine I-17 surfaced off the coast of California and, for the next twenty minutes, opened fire with its deck gun on an oil refinery at Santa Barbara.

The shelling did only minor damage, but it reinforced the feelings of dread and vulnerability that so many Americans felt. Military officials announced that new Japanese attacks could probably be expected. Everyone was on edge.

At a little after 7pm the next night, February 24, nervous citizens began reporting sightings of “flares” and “blinking lights” over California, and the entire coastal defense, fearing that it was a Japanese air raid, went on full “ready to fire” alert. After three hours, nothing happened, and the guns were ordered to stand down.

Then a few hours later, at a little past two in the morning, the alarm was raised again. Radar operators reported incoming targets about 120 miles offshore, and, although the “blips” disappeared shortly afterwards, everyone assumed it was a Japanese attack. Military officials were well aware of the story of radar contacts of the incoming raid on Pearl Harbor that had been ignored, and nobody wanted to re-play that scenario again. So now, American fighters were sent to their runways, ready to scramble as soon as the incoming bombers were tracked and their target destination determined. Anti-aircraft crews were set to Green Alert, with guns loaded and ready to fire. And a blackout was ordered for the entire Los Angeles area. This time there would be no surprise attack.

Reports began flooding in—most of them contradictory. “Sightings” indicated incoming groups of 25 bombers—or just a single airplane. They were moving at low altitude—or at 20,000 feet. They were moving “very slowly”—or at over 300mph. Meanwhile most people who were fervently scanning the sky—some of them newspaper and radio reporters who had been in London during the Blitz—saw nothing at all. As the War Department would report later, the incoming information was “hopelessly at variance”.

Shortly after 3am, the anti-aircraft gunners opened fire, though it was never clear what they were shooting at. The flashes and smoke from the exploding AA shells apparently added to the confusion, as other guns began targeting them and opening fire as well. For the next several hours, over-excited gunners all over Los Angeles blasted away at the night sky. In total, almost 1500 shells were fired. Since the proximity fuse had not yet been developed, these explosives were timed to detonate at a particular altitude, but many of them failed to go off and fell back to the ground. Some of these then exploded on impact; others went off when curious people found them lying unexploded on the streets. At least three people were reported killed by the rain of AA shells. From one to three additional people died from heart attacks brought on by the stress and panic.

When dawn finally illuminated the skies, however, it became clear that there were in fact no enemy bombers. Even the American fighters nearby, with no clear target to intercept, had never taken off. Although hasty rumor had indicated that several “enemy planes” had been shot down (one Japanese Zero had allegedly crashed on a boulevard in Hollywood), it was quickly determined that not only had there been no aircraft wreckage or debris, but there had not been any explosions or injuries from enemy bombs or gunfire. All of the city’s damage had come from its own anti-aircraft fire. Everybody had been shooting at nothing.

Nevertheless, the newspapers the next day were full of reports about the “battle”. Fact-free speculation opined that the “Japanese bombers” had come from aircraft-carrying submarines offshore, or from secret enemy air bases in Mexico. Others declared that the “raid” had been staged by the War Department itself, either as a “practice exercise” that had gone awry, or as an intentional way to entice California’s war industries to leave the vulnerable coastal areas and relocate further inland.

The Los Angeles Times published a spectacular photo of a round object caught in the glare of searchlights. It was merely a heavily-retouched blurry shot of an exploding anti-aircraft shell, but in later years it would be cited by flying saucer enthusiasts as proof that an extraterrestrial spaceship had been flying over LA that night.

After the war, others speculated that the “battle” had been touched off by Japanese balloon bombs. But Japanese records showed that no fu-go bombs had been released over the United States until 1944, almost three years later. The Japanese archives also show that there were no aircraft carriers in the vicinity of the US coast, and no long-range seaplanes capable of reaching the area either. The Japanese did indeed develop submarines capable of carrying a small number of light bombers, but this was not until late in the war, and they never saw combat.

Another hypothesis is that the “air raid” was just an errant weather balloon, or one of the radar-reflecting balloons that was being used to test the newly-installed radar systems. In Los Angeles, requests had been made for the Army Air Force to send a couple of airplanes to fly along the coast as a training exercise for the new radar operators, but no planes could be spared for this, so some installations released balloons with metal wires instead, which could mimic “enemy aircraft” for testing new equipment and for instructing new operators.

The most likely explanation for the “Battle of Los Angeles”, however, remains the one given at the time by Secretary of the Navy Frank Knox. He announced that all the hysterical reports had been exaggerated, there had been no enemy raid, the gunners had been shooting at nothing, and the whole incident had been prompted by nothing more than a false alarm caused by “war nerves” among the inexperienced radar operators.

5 thoughts on “Battle of Los Angeles”