The Civil War was inadvertently provoked by an invention made by Eli Whitney. 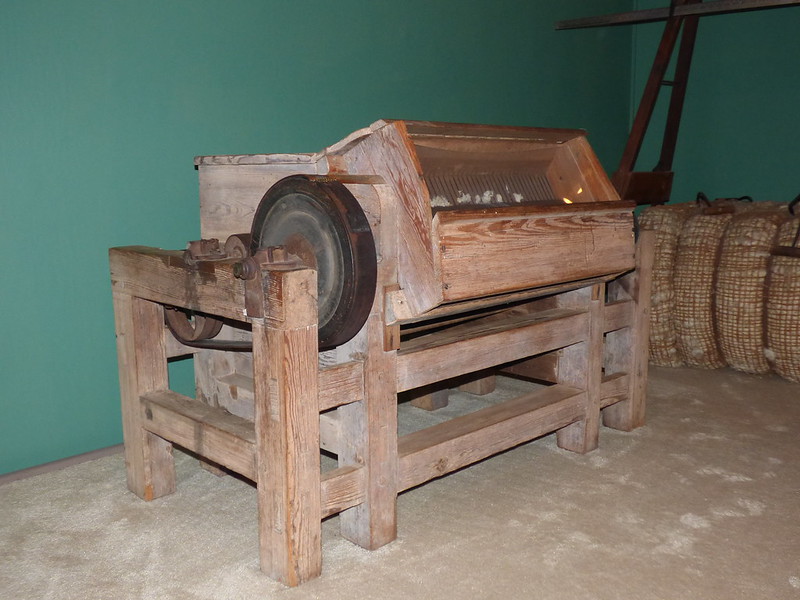 Almost from the beginning, the thirteen British Colonies in North America were differentiated from North to South. In the Southern colonies, the warm wet climate and rich soil was best-suited for large-scale agriculture, and most of the population was involved with the “plantation” system in which cash crops like tobacco, sugar or indigo were grown on large farms and then shipped to England. In the Northern colonies, however, where large-scale plantations were not practical, most of the population either lived on small single-family subsistence farms, or were involved in the industrial trades (iron-working, leather-making, printing, etc) or with commercial shipping or fishing.

They were two very different economies, and they led to two very different cultures. In the North, most commercial shops were small and the owners usually did much of the work themselves. To help them, many proprietors took on “indentured servants”: these were people from Europe (usually England) who agreed to work in the tradesman’s shop for a set period (around seven years) in exchange for having their passage to America paid for by the proprietor. Later, as immigration proved too low to meet the demand for labor, workshops began to take in young boys as “apprentices”, who would be housed and fed by the proprietor in exchange for learning the trade on the job, until the apprentice was ready to set up a shop of his own.

In the South, an entirely different social structure appeared. Here, it was most economical to have large plantation farms that could be worked with great numbers of the cheapest unskilled labor possible. In the first years of the American colonies, much of this cheap labor came from beggars, criminals, and other “undesirables” who were rounded up in London and sent to the colonies in lieu of a jail sentence. In 1619, however, a new source of cheap labor opened up when a Dutch trader sold a cargo of 20 African chattel slaves to a plantation owner in Jamestown VA. By the time of the American Revolution in 1775, the import of enslaved people from Africa had been legalized in all 13 colonies, though by far the heaviest concentration was in the Southern plantation states. (A significant number of African-Americans in the North were freemen, and some 5,000 of them served in the Continental Army during the Revolutionary War.)

By the end of the 18th century, however, just after the United States won its independence from Britain, the Southern plantation economy faced a crisis. The large tobacco, sugar, and indigo plantations were losing productivity as the soil became exhausted, and new global sources of these products (especially in the Caribbean) were cutting into American exports and weakening the South’s economy. Just in time, a new product appeared: cotton. England was beginning its Industrial Revolution and would soon become the textile capitol of the world, as mechanized looms and spinning jennies churned out finished cloth at a stupendous rate. To feed their insatiable demand for raw materials, the British imported cotton from all over the world—and this was a crop that was suitable for slave labor on the Southern plantations.

But it was an invention in 1793 that changed the Southern cotton industry and inadvertently set the country on the path that eventually led to Civil War.

Although cotton was a profitable plantation crop, it was very labor-intensive: the cotton fibers grew as a tight ball of fluff surrounding the plant’s large and numerous seeds. So before the cotton fibers could be spun into thread or yarn, the large seeds had to be painstakingly cleaned out of the fibers by hand.

In 1793, a young man named Eli Whitney had just graduated from Yale and taken a job in South Carolina to work as a tutor for several plantation owners. In casual conversations, they mentioned the difficulty of separating cotton seeds from the fibers, and Whitney had a flash of insight. Later, the story would be told that he had gotten the basic idea for his seed-separating machine by the memory of watching a cat trying to attack a caged chicken: the cat’s claws pulled the feathers through the wire cage, leaving the chicken behind.

Over the next few weeks, tinkering in his spare time, Eli Whitney invented his “cotton gin”. Although its social effect would be huge, the machine itself was simple: the operator would pour freshly-picked cotton balls into a hopper and turn a handle. This would rotate a wire drum covered with hooks that passed between the teeth of a metal comb. The teeth of the comb were wide enough for the hooks to pass through, but too narrow for the cotton seeds. So as the drum turned, the cotton fibers would be caught by the hooks and pulled through the comb, while the seeds would be stripped off by the comb’s teeth and fall away. A second drum, spinning more rapidly and covered with brushes, would then rub the seed-free cotton fibers off the first drum and collect them inside. The seeds would drop out of one side of the machine, and the clean cotton fibers would pile out the other side. The cotton seeds could now be gathered and pressed to make oil, meal, and animal feed, while the clean cotton fibers could be sold to the English textile mills.

Using a cotton gin, a slave labor force could now more than triple its output. It transformed the Southern economy. In 1830, the US had produced 750,000 bales of cotton: by 1850, when Eli Whitney’s invention had become widespread across the South, production soared to 2,850,000 bales.

As the cotton economy grew, so too did the need for enslaved people to run it. From 1800 to 1850, the number of slaves in the South increased by 500%, and by 1860 the Southern plantation states were producing two-thirds of the world’s entire cotton crop. The cotton plantations became fabulously wealthy and the English market seemed limitless, and “King Cotton” reigned supreme. The entire Southern economy was utterly dependent upon cotton and the slave labor which produced it. When the “abolitionist” movement to abolish slavery began in the Northern states, the collision between North and South was inevitable.

Eli Whitney died in 1825, decades before the cataclysmic war which he inadvertently helped to create. Although his invention fueled the entire Southern economy and created immense fortunes, he himself never made much money from it. Although he had patented his machine, the design was so simple that it could be easily copied by any farm hand, and so bootleg versions of his cotton gin appeared everywhere, for which he never received a dime.

Because the cotton gin is such an important part of the history of slavery and the American Civil War, it is a common display in history museums and reconstructed antebellum cotton plantations. The History Museum in Savannah GA is one of many that have a working cotton gin on exhibit.