In the midst of the Great Depression, President Franklin Roosevelt launched the New Deal, a massive government-funded effort to restart the economy, put people back to work, and provide a social safety network that Americans had never had before. Today, the programs of the New Deal form the spine of America’s society. But back in the 1930s, Roosevelt was bitterly opposed. The extreme right-wing, much of which openly supported Hitler, Mussolini, and fascism, condemned FDR and his programs as “communistic”. But the New Deal also had critics from the left as well, and the most popular of these was Louisiana Senator Huey P Long. 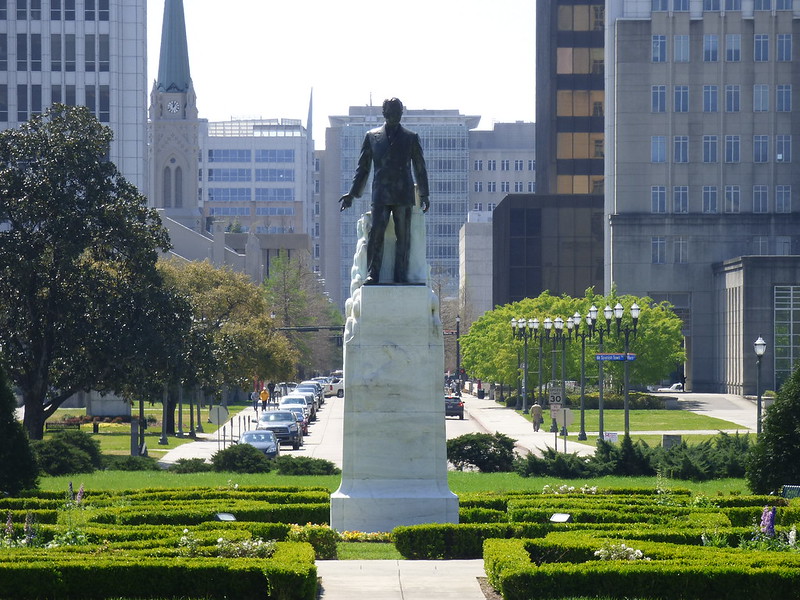 Huey Pierce Long Jr was born in Winnfield, Louisiana, in August 1893. He later liked to tell people he had been born in a log cabin, but he was actually the son of a farmer. This area of the state was a stronghold for populist ideas: on each of his campaigns, Progressive Party candidate William Jennings Bryan gave stump speeches here. Young Huey seemed to absorb it all. In his senior year at high school he was expelled for passing out leaflets condemning the faculty. He then worked as a salesman, pitching everything from patent medicines to kerosene cans to cottonseed oil.

But his real interest was politics. Figuring that a law degree was the ticket to winning elections, he attended Tulane Law School and finished a three-year program in just eight months, passing the bar at age 21 and setting up a practice in Winnfield. Here he became well-known as a lawyer who was willing to defend the poor and powerless, a practice he continued when he moved to Shreveport in 1915. It was his entry to politics.

At that time, Louisiana was dominated economically and politically by a handful of big industries and wealthy families—most of all by Standard Oil. The entire state government was rife with corruption and bribery, and the economic interests of this urban elite ruled with an iron fist. The rural areas of Louisiana were unbelievably primitive: there were virtually no schools, no doctors, no infrastructure, and no jobs. Outside the major cities, people lived like medieval peasants.

It was a huge untapped source of political power. Neither the Republican nor the Democratic Party paid much attention to the rural poor: even the Socialist Party preferred to concentrate its efforts amongst the urban factory workers. But Huey Long, with a progressive agenda inherited from William Jennings Bryan and a charismatic magnetism developed by his years as a salesman, saw it as his pathway to political power.

At age 24, he was too young to run for most statewide offices. But there was no age requirement to sit on the State Railroad Commission, and so in 1918 he ran his first campaign for public office, under the Democratic Party, and won. Long immediately earned both friends and enemies. His criticism of the establishment Democratic Governor, John Parker, brought an enmity from the entrenched urban political machines which Long welcomed and relished, and which never ended. His efforts to raise taxes on the railroads, decrease fares, and force new railroad construction to serve the rural areas, on the other hand, won him overwhelming support from Louisiana’s rural poor. By giving voice to those who had always been voiceless, Long rode a populist political wave that took him ever higher. Elected Chairman of the Public Services Commission, he pushed through a new tax on Standard Oil, and forced the telephone company to cut its rates. When Bell telephone sued to try to reverse the Commission’s ruling, Long himself argued the case before the Supreme Court and won. By 1921, Huey Long was one of the most powerful and popular men in the state, and was known as “The Kingfish”.

After a failed run for the Governor’s Mansion in 1924, Long ran again in 1928, making over 6,000 campaign stump speeches and winning over 90% of the vote. At age 34, he was the youngest Governor ever elected in the state. His campaign slogan was “Every Man a King”, and his populist platform included education reform and a massive public works project.

Long’s overwhelming popularity now made him virtually untouchable, and he quickly replaced nearly the entire state executive branch with his own supporters, shutting out the oil industry shills and the old-money families that had always held power in the state. As Governor, Long pushed through programs to make life better for the rural poor, including a massive road-building project that increased the state’s paved mileage from just 300 to 13,000 miles. Schools, bridges, libraries, and hospitals were constructed across the state. He introduced free textbooks to schools, abolished the state poll taxes, and installed gas pipelines to the poorer neighborhoods in New Orleans. To pay for it all, he increased taxes on the wealthy and on the industries—especially Standard Oil—again and again.

Since Reconstruction, Louisiana’s state government had always been based largely on machine power politics, lubricated by bribery and corruption. And despite his populist program of reform, Huey Long slid comfortably into this arena. He became just as adept in the art of palm-greasing and backroom deals as he was at stump campaign speeches, and by 1928 his opponents, finding themselves increasingly shut off from power, filed impeachment charges of misappropriation of funds and illegal “loans”. In response, Long tried to adjourn the legislature early, which provoked a fistfight on the floor. Eventually the State Senate fell two votes shy of convicting Long and removing him from office—helped, it was whispered, by an artful exchange of money from Governor to Senators.

By 1929, Long’s power was unchallenged: he rammed through laws giving him the power as Governor to personally appoint virtually every state employee, from policemen to government department heads, and he ruthlessly purged opponents and critics. To many of his populist supporters, it was a necessary expedient for removing the old entrenched wealthy political elite: to his detractors, it was a virtual dictatorship. A mesmerizing speaker, Long was on the radio constantly, defending his programs, castigating the rich and powerful, and calling for “redistribution of wealth”. He even formed his own newspaper, the Louisiana Progress—which he used state employees to distribute, and to which he ordered them to subscribe.

Then in October 1929, the stock market crashed, the Great Depression was on—and Huey Long found himself on the national political stage. As the American economy collapsed, Long’s populist rhetoric was a clarion call to those who had lost everything. His radio speeches condemning President Herbert Hoover were broadcast nationally. In 1930, Long, while still serving as Governor of Louisiana, ran for the US Senate and won. Before taking office in Washington DC, he finished his term as Governor (which didn’t run out until 1932), then installed a friend of his in Baton Rouge and continued to run the state from afar virtually single-handedly.

In 1932, Franklin Roosevelt was elected President, and the New Deal was born. At first, Senator Long was a fervent backer. But by 1934, Long had decided that Roosevelt (along with the rest of the Democratic Party) was too soft, too easy on the rich, and too beholden to the wealthy. He formed a grassroots organization called the “Share Our Wealth Society”, which advocated a guaranteed minimum annual income and a heavily graduated tax on the rich. “There is only one relief that can come to the American people that is of any value whatever,” Long declared, “and that is to redistribute wealth by limiting the size of the big men’s fortunes and guaranteeing that, beginning at the bottom, every family will have a living and the comforts of life.” The group quickly grew to some 5 million members. Privately, Roosevelt considered Long to be a dictatorial demagogue without any real program or principles, and referred to him as “one of the most dangerous men in the country.” During one Senate speech in which Long criticized a Democratic politician, the entire Democratic caucus got up and silently filed out of the chamber.

The real purpose of the Share Our Wealth Society, in turn, was plainly apparent—it was to serve as Long’s vehicle, independent of the Democratic Party, for an electoral challenge to FDR in 1936. The Louisiana Senator officially announced his candidacy for the White House in August 1935, and quickly wrote the manuscript for a book explaining his programs, entitled My First Days in the White House. He did not know that it would be published posthumously.

On September 8, 1935, Senator Huey Long was in Baton Rouge, helping to push a redistricting bill through the state legislature. The edict was aimed at one particular person, Judge Benjamin Pavy, a political opponent whom Long was attempting to force from office by removing his judicial district from existence. Waiting in the lobby of the capitol building was a local surgeon, Carl Weiss—Judge Pavy’s son-in-law. As Long walked by, accompanied by his usual coterie of bodyguards, Weiss stepped in front of him and fired one or two shots from a .32 pistol, hitting the Senator in the abdomen. Immediately the bodyguards all opened fire, hitting Weiss a total of 62 times (and according to some reconstructions also hitting Long with at least one ricochet). Weiss died instantly.

Huey Long was taken to surgery, but an infection developed and he died two days later. His last words were, “God, don’t let me die. I have so much to do.” He was buried with ceremony on the grounds of the new State Capitol Building, which he had commissioned as Governor.

2 thoughts on “Kingfish: The Colorful Career of Huey Long”