During the height of the Cold War, the US Air Force sought to produce the ultimate doomsday weapon—a bomber that could not only deliver atomic weapons, but which would use nuclear-powered engines. 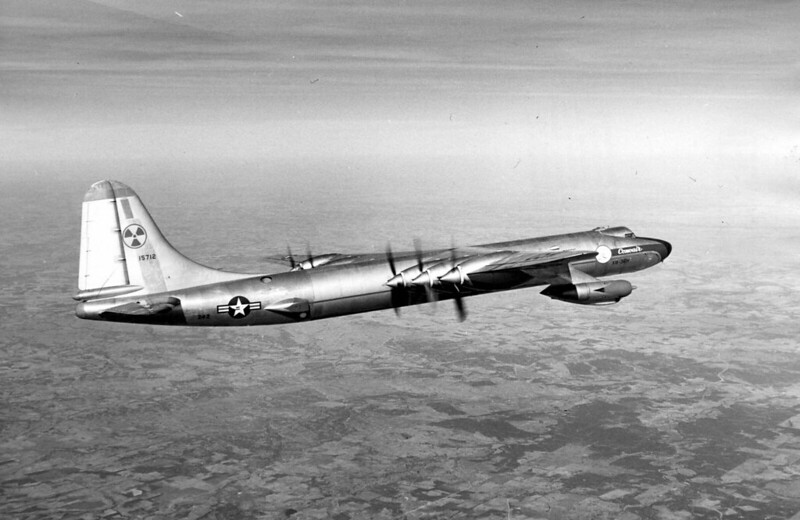 In 1940, it looked as though the United States might soon be facing Hitler’s Germany alone. France had already fallen, and Britain was barely hanging on. Although public opinion prevented President Franklin Roosevelt from openly intervening, he knew that he would sooner or later have to face the Nazis, and he was afraid that if England fell, he would desperately need the capability to strike at Europe from bases in North America. As a result, the Army Air Force authorized the development of an immense super-bomber, bigger even than the planned B-29, which would be capable of flying to Germany, bombing targets there, and then returning nonstop to the US. It was dubbed the B-36.

As it turned out, the B-36 appeared too late for the Second World War—but was just in time for the Cold War. By 1950, the B-36 was the frontline American strategic bomber, counted upon for delivering nuclear weapons to the USSR in the event of World War Three.

The B-36 had, barely, enough range to take off from bases in the northern United States, fly over the North Pole, and reach targets in northern Russia. In an attempt to increase their bombing range, the Air Force was already working on methods of air-to-air refueling. But there was also another possibility under consideration—an atomic-powered bomber. With a uranium-fueled nuclear reactor as its power source, the Air Force concluded, bombers could be built that would have essentially unlimited range, and which could theoretically fly for months without needing refueling. It could take off from American bases and reach any target in the world, or it could stand “on station”, circling just outside Soviet airspace, for days or weeks at a time, either conducting long-term surveillance or reconnaissance, or waiting to receive the order to dash in and drop its nuclear weapons. It would change the entire strategic picture. And, it was presumed, a civilian version of an atomic-powered aircraft would revolutionize long-distance air travel.

The Strategic Air Command and the Atomic Energy Commission asked several aircraft companies to look into the idea. The first step would be to determine if it was even feasible to build a nuclear reactor small and light enough to fit into a bomber and get off the ground. The Navy had already begun work on building small reactors for its submarines, and by 1953 the Air Force had produced a workable model that it considered suitable for aircraft.

At first, the Air Force was planning on using an unshielded bare reactor, hoping to save itself all the heavy shielding that the Navy was using in its subs. This, of course, meant that the atomic airplane would continuously leak radiation which would contaminate the area around it. So, planners assumed that the bombers would be based on uninhabited islands and would avoid populated areas. As for the bomber crews, who would also be irradiated, the Air Force came up with the cockamamie idea that it would only assign crewmen over the age of 50 to fly and maintain the planes, reasoning that if they got sterilized by the radiation, well, it wouldn’t matter anyway.

In the end, though, the Pentagon concluded that they really could not have an atomic-powered bomber flying around spewing out radiation everywhere it went, and so it decided that shielding was necessary. In 1955, the Air Force was ready to carry out tests: a B-36 bomber named “Crusader” was modified to carry a small uranium reactor in the aft bomb bay which, although not connected to the plane’s conventional engines, was fully active and could be powered up as a test bed for various potential radiation shields. The plane was dubbed the NB-36.

The Navy, which had few weight restrictions on its reactors, had shielded its submarine crews with thick walls of lead, which basically enclosed the power compartment and sealed it off from the rest of the ship. In the NB-36, the specially-modified cockpit was also protected by 12 tons of lead, but the Air Force hoped to find lighter and better materials.

So, from 1955 to 1957, the atomic test-bomber made a series of 47 test flights. Each time, the plane had two nuclear engineers aboard, and was accompanied in the air by a transport carrying a group of Marines, whose job it was to parachute immediately if the NB-36 crashed anywhere and seal off the area to keep any civilians away. With gallows humor, the Marines referred to themselves as the “Glow-In-The-Dark Brigade”.

A wide variety of potential radiation shields were tested, ranging from water jackets to rubber to paraffin wax. In the end, the Air Force decided that the most practical solution was not a single thick layer around the reactor, but a number of different layers made of different materials, each designed to absorb or scatter a particular type of radiation. Further, to help maintain flight balance in the airplane, these various shields were placed throughout the airframe: some were right next to the reactor, and some were further forward around the cockpit. The concept became known as “distributed shielding”. The weight of the required reactor, engines and shielding was estimated at 80 tons.

Once it was determined that one could indeed carry a live nuclear reactor on board a bomber without killing the crew, the next step was to design the actual atomic jet engine. The Air Force wanted a single reactor to power two separate engines, to protect the aircraft in case of a failure. In theory, the idea for a nuclear-powered engine was relatively simple: air would be sucked into the front of the engine, where it would be heated by the intense energy from the reactor; as the air got hot it would rapidly expand and be thrust out through a nozzle at the back of the engine, driving the plane forward. It was, in concept, not much different from an ordinary jet engine, except there was no jet fuel to burn: the heat all came from the nuclear reactor.

Two different theoretical ideas for achieving this were produced. The first of these, championed by General Electric, was called “direct cycle”. In this design, air would be channeled directly into the reactor, passing through a series of tubes where it would be super-heated and then fed into the engine nozzle. The second method was called “indirect cycle”. Developed by Pratt & Whitney, this proposed engine would pull the incoming air into an isolated reaction chamber that was entirely separate from the nuclear core, where heat exchangers would drive the atmospheric gas to high temperatures and expel it to produce thrust.

The “direct cycle” design had the advantage of being mechanically simpler, and therefore smaller and lighter. But it had the serious disadvantage of exposing the incoming air directly to the reactor’s radiation, and therefore of releasing a constant stream of irradiated exhaust out the back of the bomber. The “indirect cycle” scheme avoided this, but it was larger, heavier, and used a complex system of liquid metal flowing through pipes and pumps to transfer heat from the reactor to the incoming air.

Although it was not yet clear which engine concept—if any—would be workable, the Air Force went ahead with a “request for proposals” christened the WS-125, which was taken up by Convair, the manufacturer of the B-36, and by Lockheed. The WS-125 was to have a single atomic power plant in the back of the fuselage running two jet engines, one on either side. The crew would be up front in a shielded cockpit, and several nuclear bombs would be nestled inside the forward fuselage. Each flight made by the new bomber would be limited only by the length of time that the crew could stand being aboard, and each plane could go for months or even years before its uranium reactor fuel began to run out. To make refueling quick and easy, the entire reactor-engine unit was planned to be modular, allowing the whole assembly to be quickly removed and replaced. The super-bomber was intended for deployment in the early 1960s.

But the project was already in trouble. The Air Force could never solve the most basic problem of all: safety. The Navy could put nuclear reactors on its submarines and surface ships because they spent nearly all their time out at sea, and if there would happen to be an accident the whole mess would simply sink to the bottom of the ocean and present no danger to populated areas. But a nuclear-powered aircraft would of necessity have to fly virtually anywhere to air bases all over the world—and therefore could potentially crash anywhere, including near or in populated areas. The very idea of a crash in a friendly foreign country that permanently contaminated a large inhabited land area was enough to make the hair of American politicians and Air Force Generals turn white, and there was no way to avoid the risk over the long term.

At the same time, by 1956, new developments were making that danger less and less necessary: the Inter-Continental Ballistic Missile was nearing deployment, and it was assumed by many that the strategic bomber would simply disappear and the US bomber force would be replaced with “silo sitters”. On the technical front, moreover, things were lagging: General Electric had come up with a working model of their direct-cycle nuclear engine, but the thrust it produced was far less than expected. Pratt & Whitney, meanwhile, could not get their indirect-cycle engines to work at all. The Air Force ended all effort on the WS-125 airframe until a reliable nuclear engine was available. President Eisenhower was already considering an end to the whole project.

But in December 1958, the atomic bomber program got an unexpected boost—from the Russians. In that month, the respected American defense magazine Aviation Week ran a story, citing independent sources in Moscow, declaring that the Soviets had already been secretly flying a functional atomic-engined bomber for several months. Technicians on the American project, who knew the enormous difficulties involved, simply did not believe that the USSR could have done it, and declared the story as untrue propaganda. But the politicians in DC, already alarmed by the recent Soviet launch of Sputnik, reacted in panic, and increased the budget for the American project.

In the end, however, reality won. By 1959, the problem of what to do about “crashing” remained unsolved. GE now had nuclear jet engines that could be counted on to run reliably, but the thrust-to-weight ratio was still too low and the engines still weighed too much. Pratt & Whitney had not yet been able to produce a working prototype at all. ICBMs, meanwhile, were getting bigger, better, and more reliable. President John Kennedy, convinced that the atomic-powered bomber would never work, was a huge safety risk even if it did work, and wasn’t really needed anyway, cancelled the program in 1961.

But there was one final surprise……

After the Soviet Union collapsed, in 1991, American researchers were stunned to discover that while the 1958 Aviation Week story was a fake, the USSR had indeed developed and flown a nuclear-powered aircraft, beginning in 1961 and running to 1969. The way they had done it was, in typical Soviet fashion, both crude and brutal. After producing a rudimentary but functional direct-cycle nuclear-powered jet engine, they modified a Tupolev “Bear” long-range bomber to carry it—unshielded. During each of the 40 test flights, the crew was irradiated, and the airplane spewed out a trail of radioactive fallout as it flew. Most of the two test crews were already dead by the time the Soviet Union fell and the program was revealed.