Once a luxury cruise ship in service with the Soviet Union, the Lyubov Orlova ended her days as a derelict floating, completely empty, in the North Atlantic Ocean. 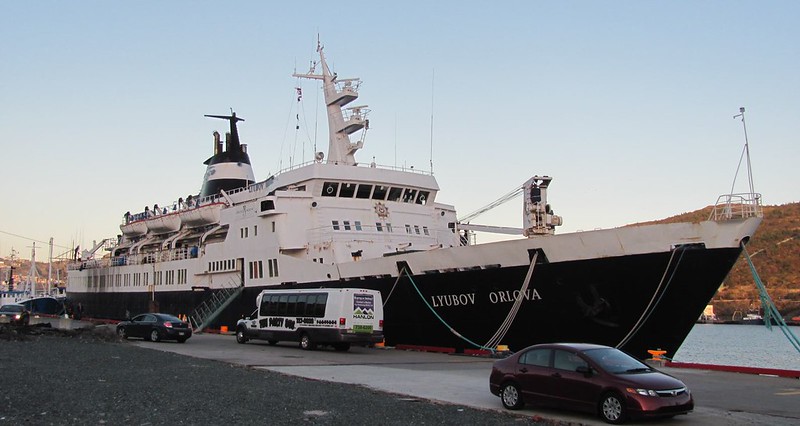 In 1975, the Far Eastern Shipping Company, based in the Soviet port of Vladivostok, placed an order with the Brodogradiliste Titovo Company in Yugoslavia for a new cruise ship. Intended to sail into the frigid waters of the Arctic Circle, the new liner was 295 feet long and was constructed with a specially-strengthened hull to protect against ice. Christened the Lyubov Orlova, after a popular Russian actress of the time, the vessel could carry 110 passengers on excursions along the northern coast of Russia to Canada, and down to the tip of Argentina near Antarctica.

After the Soviet Union broke up, the Far Eastern Shipping Company became a privately-owned cruise line called FESCO. For the next seven years, the Orlova continued her regular cruises to the north and south polar regions.

In 1999, after undergoing a refurbishment, the ship was purchased by the Marine Expeditions Company, based in the Cook Islands. Then three years later, after another spell in drydock for renovation and modernization, she was chartered by the Cruise North Expeditions Company. The cruise vessel carried passengers from Vladivostok to the Arctic and Antarctic without incident until November 2006, when she accidentally ran aground on Deception Island in the Antarctic and suffered minor damage. She was able to cruise to Argentina under her own power for repairs.

Although the Orlova was quickly patched up and went back into service, things were not going well for her owners. Cruise North Expeditions began having financial difficulties, which were compounded by an incident in which a mechanical fault with the ship prevented her from making a scheduled cruise, and the company was unable to repay the passengers for their now-worthless tickets. By 2010 the company was a quarter-million dollars in debt and had not paid its own shipboard workers for five months.

In response, the various creditors filed legal actions, and in September 2010, as the ship lay at anchor in a port at Newfoundland, Canada, authorities impounded her. After a year and a half of legal wrangling, the Lyubov Orlova, now an empty and rusting derelict, was still tied up in St John’s Harbor, and Canadian authorities decided to confiscate and sell the vessel in order to pay for the overdue harbor fees. In February 2012, the Orlova was transferred to the Neptune International Shipping Company, which made arrangements for the empty hulk to be towed to the Dominican Republic and broken up for scrap. In January 2013, the Orlova finally left the St John’s dock, under tow by the American tugboat Charlene Hunt.

And now the story of the Lubyov Orlova took an odd twist. Less than a day out from Newfoundland, the towing cable connecting the hulk to the tugboat broke, and the Orlova drifted free. The Charlene Hunt tried repeatedly to reattach the line, but was prevented by high seas and bad weather. The tug gave up, and when the weather cleared another ship, the larger supply vessel Atlantic Hawk, went out and successfully attached another cable to the Russian ship.

But now the Canadian Government decided that it was too risky to tow the derelict all the way to the Dominican Republic, citing safety concerns with the Orlova’s structural integrity. And so, the Russian liner was towed outside of Canadian territorial waters and cut adrift. The prevailing winds and currents, the authorities concluded, would push the empty derelict out into the center of the North Atlantic, away from Canadian territory and far from any shipping lanes or marine oil fields. Although the Canadians would continue to track the ship, it was now up to the Orlova’s owners to intercept and retrieve the abandoned vessel if they wanted it.

Left on her own, the Orlova drifted with wind and currents. By February 23, the ghost ship, populated now only by shipboard rats, was spotted by a passing boat about 1300 nautical miles from the coast of Ireland. The British tabloids ran breathless stories claiming that the rats on the abandoned ship had probably gone cannibalistic during their voyage, and speculated that people might be attacked by a horde of hungry rodents if the ship came aground.

But in the evening of February 23, several hours after she had last been spotted, coastal rescue centers in Ireland received a radio signal from one of the Lyubov Orlova’s emergency beacons (known as EPIRBs). Since these are only activated when they are submerged in water, it was presumed that the signal, about 700 miles from the Irish coast, indicated that the Orlova had sunk. Then, oddly, a second EPIRB signal was received from the Russian ship almost two weeks later, on March 12. It was speculated by some that the Orlova had actually been broken in half during a series of recent storms, and that one half of the ship had drifted on its own for a time before finally sinking.

Since nobody had actually seen the derelict go down, however, there remained some people who argued that the Orlova was still out there, floating aimlessly as a ghost ship. In September 2014, when an Irish radar station recorded a brief blip from what appeared to be an unscheduled large ocean vessel, the British tabloids once again went wild, announcing that it was probably the wreck of the Lyubov Orlova, drifting around for the past year and a half with her cargo of cannibal rats.

But the Orlova never appeared off the Irish Coast, no hordes of man-eating rats came ashore, and authorities were unanimous in concluding that the Russian ghost ship had sunk back in 2013, a short while after being set adrift.