The Denisovans, one of our early human relatives, are known only from a finger bone, two teeth, and the ghostly remnants of their DNA inside our own genome. 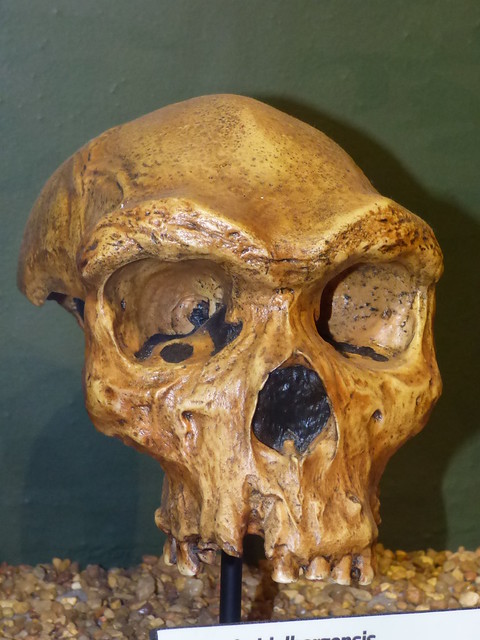 In 2008, Russian scientists from the Institute of Archaeology and Ethnology of Novosibirsk began excavations at a site along the Anuy River in the Altai Mountains, near the borders of Mongolia and China. Known as Denisova Cave after a religious hermit who had lived there in the 1700’s, the cave had been intermittently occupied by both Neandertals and modern Homo sapiens for at least 125,000 years.

That July, paleontologist Alexander Tsybankov, working in a sediment layer dated to around 40,000 years old, uncovered a tiny fragment of bone about the size of an aspirin tablet that was tentatively identified as part of a bone from the little finger of a hominid, probably Homo sapiens. The growth pattern indicated it had belonged to a child about eight years old.

Although tiny, the bone was very well-preserved by the cold and dry conditions inside the cave, and the Russian team thought it might be possible to extract a DNA sample from it. So the pinkie bone was sent to the Max Planck Institute in Germany, where over the course of a year researchers were able to sequence a sample of mitochondrial DNA. They were shocked by what they found. Comparing the DNA sequence to those of known modern humans and Neandertals, they found that the sample from the Denisova Cave differed from both, by over 300 sites. The DNA did not come from Homo sapiens, and it also did not come from Homo neandertalensis. It came from something completely different—an undiscovered hominid, now known only from its DNA.

A year later, a toe bone and an odd-looking adult molar tooth was uncovered inside the cave, further down in the same sediment layer. The toe bone was examined for DNA, which turned out to match that of Neandertals. But the tooth was much larger than either a Neandertal or a modern human, and when mitochondrial DNA was successfully extracted from it and sequenced, it turned out to be from the same unknown species discovered the year before. Shortly later, a similar molar, found in the cave years earlier but misidentified as a bear tooth, yielded the same DNA.

Using different techniques, researchers now successfully extracted nuclear DNA from the earlier finger bone sample. Unlike mitochondrial DNA, which is a short loop of DNA found outside the cell nucleus and is only passed along by the mother, nuclear DNA, found in chromosomes inside the nucleus, contains the entire genotype and comes from both parents. Comparing the nuclear DNA sequences of modern humans, Neandertals and the mystery find from Denisova, investigators found that there was no Y chromosome—the young child in the cave had been a girl. But a more surprising conclusion also resulted: both the Neandertal DNA and modern human DNA contained pieces derived from the DNA found in the cave—and each of them had different pieces.

The evidence was now conclusive: the fossil teeth and finger bone found in the cave had belonged to a previously undiscovered species of hominin, which had interbred with both Neandertals and Homo sapiens. The new species became dubbed the “Denisovans”.

In total, by interpolating the Denisovan DNA segments found in the human and Neandertal genomes, geneticists were able to reconstruct over half of the Denisovan genome, enough to compare the complete sequence with that of modern living humans around the world—and they found another surprise. Already it had been known that humans outside of Africa had Neandertal genes in about 2.5% of their total DNA—the result of interbreeding that probably happened in the Middle East. Now, they found that modern humans in east Asia—particularly in New Guinea, some Pacific Islands, and parts of the Philippines—carried Denisovan genes in as much as 5% of their DNA.

According to the latest hypothesis, the predecessor of Homo sapiens, known as Homo heidelbergensis, lived in Africa about 400,000 years ago. At around that time, it migrated out of Africa and through the Middle East, then evolved into two distinct species: one species became established in Europe and became Neandertals, while the other migrated east into Asia and became Denisovans. The Denisovan DNA samples show that they had very little genetic diversity, indicating that they were probably a very small population—and shared DNA sequences show that the Denisovans must have interbred to some extent with Neandertals (less than 1%), probably at the border of their territories. Meanwhile, the heidelbergensis populations that remained in Africa evolved into modern humans, Homo sapiens, who themselves migrated out of Africa about 60,000 years ago. The sapiens population that moved into Europe encountered the Neandertals, interbred with them briefly, then replaced them. The sapiens who migrated into Asia, on the other hand, encountered the Denisovans, interbred with them, then carried those genes with them when they continued on into Southeast Asia.

And some people still carry that genetic legacy today. On the high plateau of Tibet, people have developed the capacity to efficiently extract oxygen from the cold thin air at these high altitudes—something which people from lower elevations cannot do. Geneticists knew that this ability was conferred by a gene known as EPAS1, which is found among people from the area of Tibet, but not anywhere else. It was not until the Denisovan DNA was sequenced that the mystery was solved: EPAS1 was a Denisovan gene, and had entered the Homo sapiens DNA through interbreeding. In the area of Tibet, the EPAS1 gene provided a survival advantage and was conserved through natural selection. It is not known, however, why so many Denisovan genes have been preserved in human populations of Southeast Asia, or why they were not conserved by other people in the region such as the Chinese or Japanese. It has been hypothesized that these Denisovan genes may be important in fending off certain tropical diseases.

Despite the importance of the Denisovans to human evolution, we know nothing of what they looked like, what tools they used, or what culture they had—all we know is that they had unusually large molar teeth, and they had genes for dark hair, dark eyes, and dark skin. All of the stone tools and cultural objects found in the Denisovan Cave appear to be typical of those made by Neandertals or modern humans. Some unusual-looking skulls found in China have been proposed as putative Denisovans, but since it is not possible to extract DNA from them for analysis, that remains speculation and cannot be confirmed without a genetic match.

Recently, however, yet another twist was added to the story. Geneticists who have compared the Denisovan and Neandertal genomes have concluded that they were able to detect a few sequences that appeared to have come from some other species entirely, one which had apparently contributed genes to both. This may have been an even earlier species that was encountered by both Neandertals and Denisovans as they spread across the world. So there may be yet another unknown human ancestor still to be found, suggested only by its continued presence in our genes.