The Stuka dive bomber is a familiar icon of the Nazi Luftwaffe. But its actual lifetime as an effective combat airplane was limited because of its deficiencies in design. 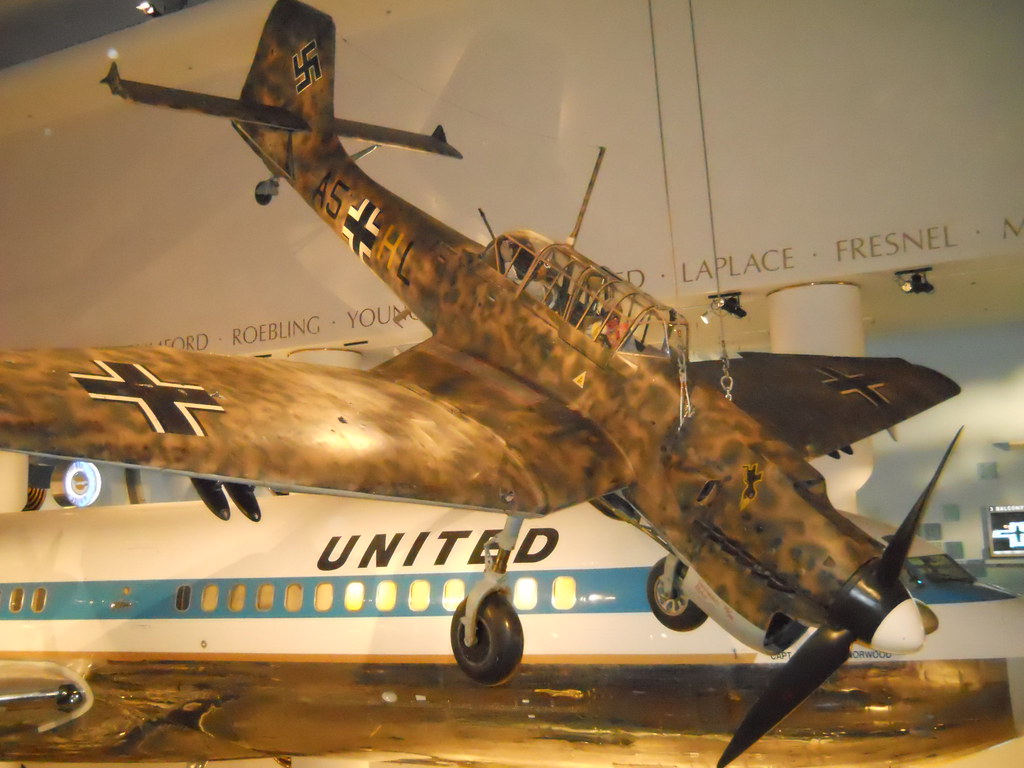 Ju-87 Stuka at the Chicago Museum of Science and Industry

By 1933, within months of taking power in Germany, Adolf Hitler and the Nazi Party were already planning out a war with France and England. To rebuild the German Air Force, World War One fighter ace Ernst Udet was placed in charge of developing new combat aircraft for the Luftwaffe. The Nazi military was developing the new concept of Blitzkrieg or “Lightning War”, which would avoid the long drawn-out trench warfare of 1914-1918 with rapid thrusts deep into the enemy’s rear area, spearheaded by columns of tanks and armored vehicles and supported by tactical air strikes. Other nations had already carried out some experiments with dive-bombing—in which a bomber delivered its bombs by dropping them almost straight down onto a target before pulling up and away—but it was Udet who became the most enthusiastic advocate of the concept.

In 1933, Udet approved a design submitted by the Junkers company for a two-seat dive bomber which would function almost as aerial artillery, sweeping down onto the battlefield to strike at tactical targets with pinpoint accuracy. The project was designated the Ju-87 Sturzkampfflugzeug, or “Stuka” for short. Intended as a short-range ground-support bomber, the Stuka would carry an 1,100-pound bomb under the fuselage and two 110-pound bombs under the wings. To withstand the stress of a high-G dive, the wings were double-sparred and configured in an upward-curving “inverted gull wing” pattern, and were fitted with dive brakes for bombing accuracy and an automatic system to pull the plane out of its dive and into level flight, in case the pilot passed out from the G-forces. The landing gear was extra-strong to allow the plane to operate from crude grass fields close to the front, and for extra effect Hitler ordered a siren, called the “Jericho Trumpet”, installed into the landing gear, which produced a shrieking scream during its dive intended to provoke terror in the target. The Stuka had forward-firing machine guns in the wings for suppressing enemy anti-aircraft gunners, and the rear gunner had his own machine gun to defend against fighters. In the original version, the tail rudder was double-finned, but after this proved too weak (and caused a crash in one of the prototypes) this was replaced with a single strengthened tail fin.

From the beginning, however, the project was delayed, partly because of difficulties in obtaining a suitable engine and partly because of opposition from other Luftwaffe officers, including Wolfram von Richthofen, who considered the Stuka to be too slow and too vulnerable. Richthofen championed a rival design, the Heinkel He-118, and the arguments continued for years until the Heinkel prototype crashed during a test flight in 1936. The Stuka began production later that year. Early models saw their first combat during the Spanish Civil War, where they were used to bomb civilians as well as military targets. When the Second World War broke out in 1939, the Stukas decimated enemy positions in Poland and France, clearing the advance for columns of Panzer tanks, and their screeching sirens became an iconic image of the Nazi Blitzkrieg.

In these campaigns, however, the Luftwaffe had enjoyed virtually uncontested air superiority. When the Battle of Britain began in the summer of 1940, the Nazis had no such advantage, and the Stuka paid the price. In the early stages of the air campaign, Stukas were sent to bomb ships in the English Channel and then to attack point targets in England, including the all-important radar sites. But now, facing modern British Hurricane and Spitfire fighters, the limitations of the Stuka design became apparent. Without effective fighter protection the dive bombers were painfully slow—barely 200mph—and their lack of armor made them extremely vulnerable. Unlike their American and Japanese counterparts, which were relatively maneuverable once they had dropped their bomb load, the Stuka was ponderous and clumsy, easy prey for fighters. In just a few weeks of combat, so many Stukas were shot down over England that they were withdrawn, and never operated in large numbers in the European Theater again.

Many Stukas were now retrofitted with sand filters for desert conditions, and these “tropicalized” versions, designated Ju-87B-2 Trops, were sent to North Africa. Here, against less capable Allied fighters like the P-40, they proved useful against enemy tanks.

One little-known variant of the Stuka was the Ju-87C, a “navalized” version, capable of carrying either bombs or a torpedo, that was intended to be carried by the German aircraft carrier Graf Zeppelin. But the Nazis never finished the carrier and no naval Stukas were ever produced.

When Germany invaded the Soviet Union in June 1941, another version of the Stuka, fitted with two 37mm cannons for tank-busting, was designated the Ju-87G. These were not capable of penetrating the front armor of a T-34 tank, but were lethal against the thinner sides and top. In the initial stages of the campaign, when the Soviet Air Defense Force was crippled and was flying inferior older models, the Stukas enjoyed success against formations of Russian tanks. The most highly-decorated German pilot of the war, Hans Ulrich Rudel, was a Stuka pilot who was credited with destroying 519 Soviet tanks while flying over 2500 combat missions. But as the war went on and the Soviets were able to produce large numbers of newer and better fighters, the Ju-87G’s proved once again to be too vulnerable, and losses were heavy. After the Battle of Stalingrad, the Nazis began replacing their Stukas with ground-attack versions of the Focke-Wulfe 190. By the time Berlin fell in 1945, the once-iconic Stuka had all but disappeared.

Today, only two Stuka dive bombers remain in existence from the 5700 that were produced during the war. In 1941, British troops in North Africa overran a Nazi airbase and captured a damaged Stuka Trop that had been awaiting repair. The airplane was sent back to England where it underwent technical evaluation and then was given to the US Air Force and sent to America. In 1974 this aircraft was restored as a static display by the Experimental Aircraft Association in Wisconsin, and was obtained by the Museum of Science and Industry in Chicago, where it is on display. The bullet holes can still be seen on the wings and fuselage.

In 1945, a Ju-87 was captured by British troops in Germany. Originally built as a dive bomber, it had been remodeled during the war as a G-model ground attack plane. This aircraft was given to the Air Historical Branch to be preserved, and is now on display in the RAF Museum.