Another landscape plant that has escaped cultivation and become invasive, the Chinese Privet reverses the normal pattern—it is extensive in the northern part of Florida but has not penetrated into the south. 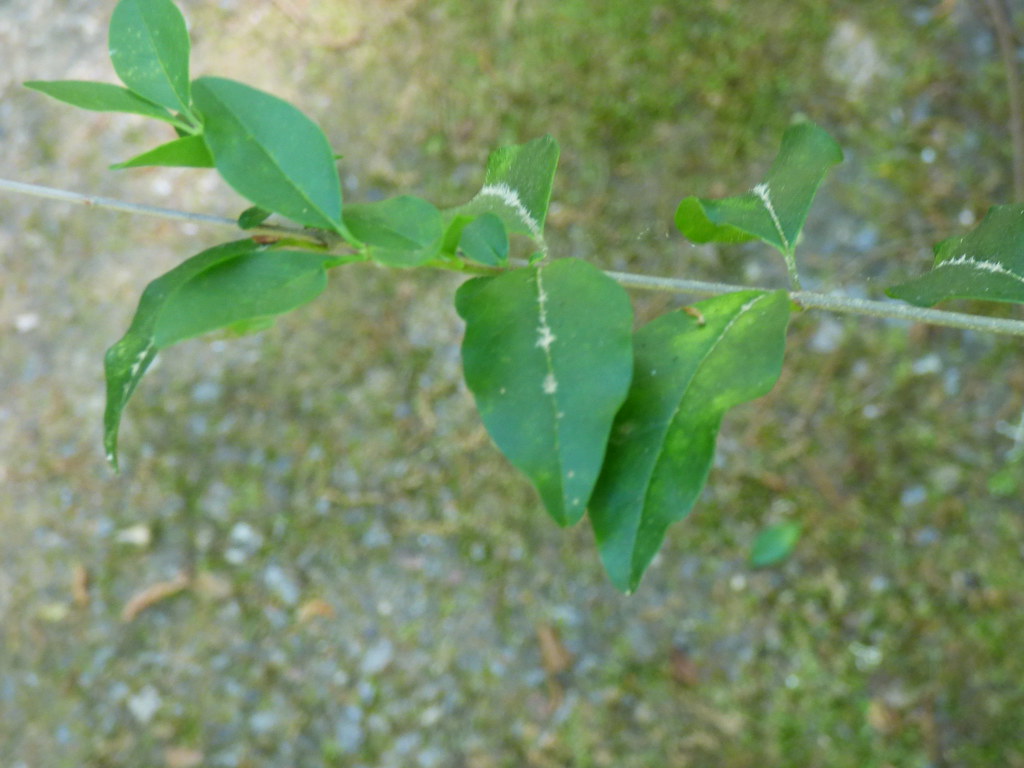 There are about 50 different species of Privet in the Ligustrum genus, all of them found in Europe, Asia and northern Africa. These are woody shrubs that grow to about 20 feet tall, with long compound leaves and dense clusters of black or blue fruits.

In Asia they are widely grown as ornamental shrubs and as hedges, and in 1852 they were imported into the US. Gardeners here liked the plants because they were hardy, attractive, and could tolerate high levels of pollutants in the air and soil.

Most of the imported Privet species behaved themselves and became common ornamental garden shrubs—these include the Japanese Privet Ligustrum japonicum and the Wax Privet Ligustrum lucidum. Some species, however, were not so well-behaved, and demonstrated a marked tendency to invade and take over uncultivated areas. And chief among these was the Chinese Privet, Ligustrum sinense.

Chinese Privet is an attractive plant with white flowers and bright blue fruit. It was widely planted in the southeast as an ornamental, but once it escaped cultivation it revealed its talents as an invader. In a native southeastern forest, the understory is usually open and sunny, with a variety of herbaceous plants and palmettos. The shrubby Privets are able to exploit this niche by growing more rapidly and taller than the natives, outcompeting them and forming an unbroken undercanopy which shades out everything underneath it. In effect, the invader is utilizing an ecological niche which had not previously existed in the area.

By the 1930s Chinese Privet had spread across the Carolinas and all the way down into north Florida. Privets prefer disturbed low-lying moist areas in forested habitats, especially along streams. Here they can form dense thickets which crowd out native plants, and the large amount of leaf litter which they produce can prevent the spouting of other seedling trees and ground plants. Privets are a demonstrated threat to Florida’s endangered Miccosukee Gooseberry, Ribes echinellum.

In humans, the pollen of the Privet plant is known to cause allergies and hay-fever symptoms.

Although Privets are reported to be toxic to cattle and other livestock, the blue fruits are eaten by native Florida animals such as deer, bobwhite quail, and other birds, and this also helps to spread the plants by depositing seeds further afield. The Privet’s affinity for wet low-lying areas also allows it to survive wildfires and then spread into the depopulated areas.

In Florida, the Chinese Privet is mostly limited to the northern part of the state, though there has been a population found in the Miami-Dade area. It is classed as a Category I invasive, and it is illegal to grow or possess. Although the plant is vulnerable to herbicides such as glyphosate, the cost to treat such large areas is usually prohibitive. Instead the state has focused its attention on halting the spread of Privet by hand-clearing areas where it is not yet established, by pulling out seedlings and digging out rootstocks.

In 1959, a natural predator of the Privet family, the Ligustrum Seed Weevil (Ochyromera ligustri) was found in North Carolina, where it had apparently been unintentionally introduced in the garden trade. Since then it has spread across the southeast. This weevil attacks the seeds and leaves of invasive Chinese Privet—but it also harms the non-invasive Japanese Privet. So far the insect has not had a noticeable effect on the spread of Privets. In New Zealand, where Privets are a serious problem, the Privet Lace Bug (Leptoypha hospita) has been imported as a biological control agent

The landscaping industry has now developed a sterile variety of Privet called “Sunshine”, with yellowish leaves. This version was developed to be suitable as a hedge plant and garden ornamental, but to be incapable of reproducing and becoming invasive. State officials also encourage people to utilize the native Florida Swamp Privet, Forestiera segregata, as a landscape plant instead of the non-natives.