Although the bagpipes are quintessentially identified with the Highland clans in Scotland, they are not native to the British Isles or even to Europe, and their history stretches back before the time of the Romans. 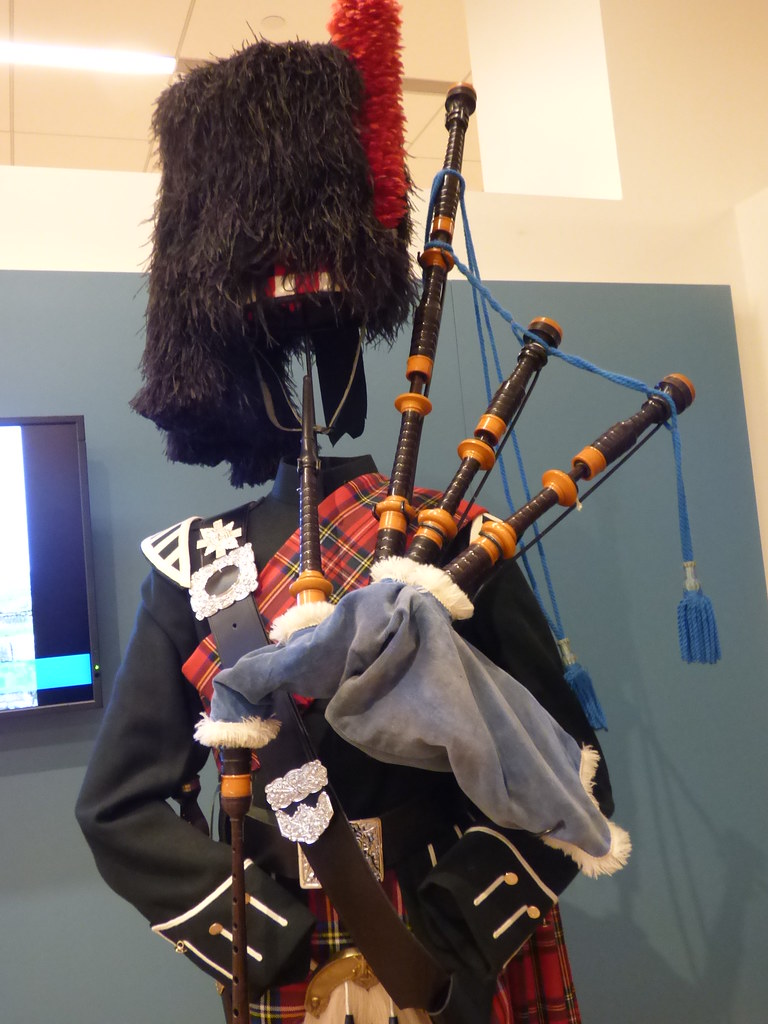 In its most basic form, a set of bagpipes is a musical instrument that consists of three parts: a “bag” that holds a supply of air, a “chanter” that is used to play notes, and a “drone” which produces a constant accompanying tone. To play, the piper blows through the chanter (which fills the bag with air) and fingers the holes to produce notes, similar to a wind instrument like a flute. The drone produces a continuous accompanying tone of one note which underlies the melody. Whenever the piper wants to take a breath, he squeezes the air bag (usually by pressing it in his left hand or between his arm and body) to generate a constant flow of air. The bagpipe thereby produces a steady uninterrupted sound.

It is likely that the first bagpipe instruments were made by pastoral herders, since they would have had easy access to the materials needed to make one (a sheep or goatskin and a pair of reed or bone pipes). It may have been a way to pass the time as they tended their flocks. But because such an instrument would decay rapidly and would leave little trace in the archaeological record, we have no direct evidence for their earliest appearance. And unfortunately the history of the instrument has, in some areas, taken on a political aspect, which means that it has become clouded in myth and legend.

Thus, although bagpipe instruments in some form may have already been in use for centuries, it is only in written or artistic references that we can find definite indications of their existence, and some of these are controversial. The earliest depiction that we know of comes in a Hittite wall carving dated to around 1000 BCE, and most authorities generally agree that the bagpipe is an invention of the Middle East, perhaps among the early goat and sheep herders of Mesopotamia. The Bible mentions, of Babylonia, that “the sound of the horn, pipe, harp, trigon, psaltery, bagpipe, and all sorts of instruments, comes to your ears”. And in Alexandria a clay figurine was found, dating to the 1st century BCE, which may depict a bagpiper.

From the Middle East, the instrument was probably carried west to Greece, where it became known as the askaulos (“wineskin pipe”), and is mentioned in a play by Aristophanes, who writes, “You pipers who are here from Thebes, with bone pipes blow the posterior of a dog”. When the Romans invaded, the bagpipe, like so much of Greek culture, was adopted throughout the Empire. Although it was mostly an instrument of the poor plebians, the Emperor Nero, who fancied himself a great musician, took up the tibia utricularis: the historian Suetonius describes the instrument, and Dio noted that Nero could play it “both with his mouth and also with his armpit, a big bag being thrown under it, in order that he might escape the disfigurement of Athens”. There are even coins from the period depicting Nero with pipes. While popular legend has it that during the Great Fire in 64 CE Nero fiddled while Rome burned, it is much more likely that, if the story were true, he would have been playing a bagpipe.

It is of course in the British Isles that the bagpipes became most famous. They may have been carried there by the invading Romans, or later through normal trade. The earliest literary reference we have is Chaucer in the 1380s, who in The Canterbury Tales says of the Miller, “A bagpipe well couth he blowe and sown.”

From England the pipes then spread to Ireland and Scotland (and it is still a great debate, tinged with nationalist politics, which was first). But it was in Scotland, and particularly in the Highlands, that the bagpipe was adopted most enthusiastically. By the 15th century there are numerous literary and artistic depictions of bagpipes in use at weddings, festivals, and sometimes even replacing organists in church. Newer versions of the bagpipes began appearing: some had a second drone pipe added, then later a third appeared, and some styles used two chanter pipes which were both fingered at once.

But one role in particular came to be dominated by the bagpipes—on the battlefield. The Scottish Highland clans were almost constantly at war (with either England or each other). Since medieval battlefields were loud and noisy, some way was needed to communicate orders to an army over an entire battle area, and musical instruments, which could be heard clearly above the din, suited that role. Most English armies used a drum corps, or a group of horns or trumpets, to broadcast battle orders. The Scots adopted the Great Pipes. Each clan had its bagpipers who were trained and paid; before a battle they would parade up and down the lines to inspire the soldiers, and during the battle they used various tunes to signal an attack, retreat, or movement.

With the failure of the Scottish uprising of 1745, the British passed the Act of Proscription that banned the Scots from carrying out any sort of military training. There is now a popular myth (fueled by political motives) that the art of bagpipe-playing itself was outlawed at this time, but that is not exactly true: there was no law against playing, but it became illegal in Scotland to use any musical instrument (including fife, drum, and trumpet) as a method of military communication, to lead an armed force, or to incite or lead a group into rebellion. Records show that a number of musicians were in fact hanged for such offenses.

After the unification of Great Britain, Scottish units, with their pipers, were sent all over the world, and the bagpipes were now adopted by British colonies as far away as Ceylon and Africa. In some of these areas, there already existed indigenous versions of the bagpipes, many of which had been in use since at least the 16th century as military signals as well as for folk music. Among these are the Turkish tulum, the Finnish pilai, the Italian zampogna, the Indian mashak, the Tunisian mizwad, the Greek tsampouna, the Bedouin habban, the Russian volynka, and the Macadonian gaita.

In the Musical Instrument Museum in Phoenix AZ, there are a large number of displays which exhibit bagpipes and similar instruments from around the world. Video clips show the players in action, and interpretive signs illustrate their history.

One thought on “Bagpipes: A History”