Lying along the border between New York and Vermont (and extending a few miles into Canada) is Lake Champlain, one of the largest and deepest freshwater lakes in the northeast. It was the site of several naval and land battles in both the Revolutionary War and the War of 1812, and is celebrated now as a vacation spot, with pleasure boating and nature-viewing along its shores and the surrounding mountains. But Lake Champlain is perhaps most famous for its lake monster, known affectionately as “Champ”—America’s own homegrown version of Scotland’s Loch Ness Monster. 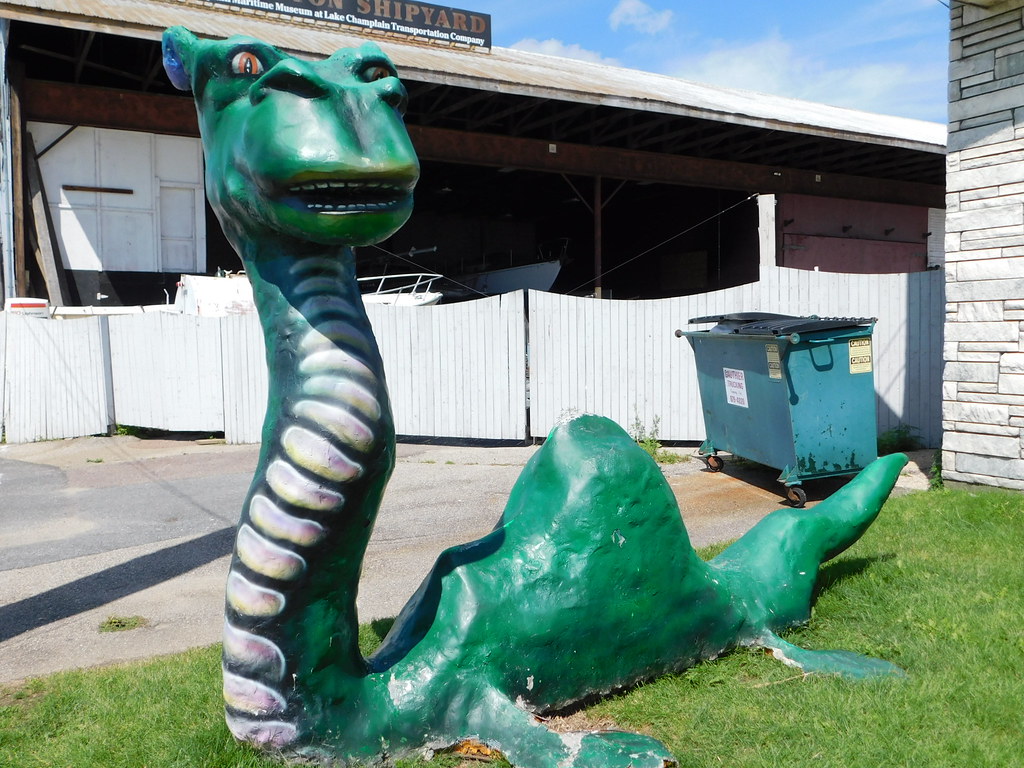 In any bar or corner store around the lake, you can spark off a conversation simply by asking someone “So, do you believe in Champ?” Some of the locals argue forcefully that it is a real animal—a prehistoric relic from the time of the dinosaurs. Many, on the other hand, dismiss the stories out of hand as fabrications, exaggerations, or mistakes. But all would agree to one thing: Champ has become a local tourist attraction. Along the streets of Plattsburgh and Burlington, you can buy “Champburgers” and “Champ” knickknacks and souvenirs. Statues of the presumed creature decorate the waterfronts. Port Henry has an annual “Champ Day”. Even the local minor league baseball team is called the “Vermont Lake Monsters”.

According to some local folklore, the Abenaqi Native Americans, who lived around the lake prior to the arrival of the Europeans, had a legend of a large monster that occasionally emerged from the water to eat canoeists. Other investigators, however, have been unable to confirm that any such mythology actually existed—a pattern which, alas, runs steadily through 400 years of “monster sightings”.

In much of the published literature surrounding Champ, monster enthusiasts repeat the story of the “first known sighting”, made, they say, in July 1609 by French explorer Samuel de Champlain, the lake’s namesake. According to this account, Champlain encountered an unknown animal in the lake that was “20 feet long, with a body like a serpent as thick as a barrel, and with a head like a horse”. Sadly, this story is a fake—or, more politely, an exaggeration. Examining Champlain’s actual published journal of his travels, we find that he is actually referring to fish that he saw taken out of the lake by local Natives: “the largest of them, as these tribes have told me, are from eight to ten feet long. I have seen some five feet long, which were as big as my thigh, and had a head as large as my two fists, with a snout two feet and a half long, and a double row of very sharp, dangerous teeth. Its body has a good deal the shape of the pike; but it is protected by scales of a silvery gray colour and so strong that a dagger could not pierce them.”

From the description, it is apparent that he is describing a gar or sturgeon, both of which are found in Lake Champlain and both of which can reach a very large size. The inaccurate description attributed to the Frenchman, of the 20-foot horse-headed snake, appears nowhere in the journals: that particular embellishment first came in a travel piece published in 1970 in a local magazine, and seems to have been made up to excite the tourists.

All of the other “early reports” cited by monster-hunters also have their problems. When a colonial powder horn dated “1760” and bearing the name of a soldier known to have been at the Crown Point Fort on the lake shore was found, it bore a stylized etched drawing of a large reptilian-looking creature, which monster fans attributed to Champ. In reality the “animal” has the typical bat-like wings of an archetypal mythical English dragon, and likely has nothing to do with any “lake monster”.

The next “sighting” appeared in the local Plattsburgh newspaper in July 1819, when “Captain Crum” reported seeing a large animal in the lake while crossing in his scow: he said it was 187 feet long, had three teeth, a red ring around its neck, a white star on its forehead, and “eyes like peeled onions”. A fanciful tale, though it’s not clear whether it was made up by the “witness” or by the “reporter” (newspapers of that time were prone to printing far-fetched yarns just to amuse their readers). But in the 1870s and 1880s there were enough reported sightings that famed showman PT Barnum offered a $50,000 reward to anyone who could produce a Champ, dead or alive. There were no takers.

It wasn’t until after the Loch Ness Monster hit the world’s newspapers in the 1930s, however, that tales of a monster in Lake Champlain really began to multiply—some 200 reported sightings since then. Some of these were hoaxes and made-up tall tales, while others were likely misinterpretations of ordinary things like floating logs, large gar or sturgeon at the surface, otters swimming in a row, unusual-looking waves and boat wakes, swimming deer, or wishful thinking on the part of the observers.

In 1977, a vacationer in St Albans VT was picnicking on the lakeshore with her children when she saw what she took to be a large animal surface nearby, grabbed her camera, and shot a photo of it. It stayed on the surface for five or ten minutes, then submerged. Sandra Mansi’s photo, now available all over the Internet, is still the single most-cited piece of “evidence” offered by the monster-hunters. Investigators determined that the photo had not been altered or retouched in any way, but it is not at all clear just what the thing in the photo is. It could be interpreted as a low hump with a curving neck and head in front. But it can also be interpreted as a floating tree trunk with a root or large branch extending off to one side. The water in this part of the lake is only 14 feet deep, making it unlikely as the haunt of a large unknown animal. But the lake is full of waterlogged trees which sink to the bottom, and are sometimes driven to the surface by underwater currents.

In 2005, two fishermen on the lake shot a digital video of something moving around just under the surface of the water. Champ fans were quick to claim it, but several investigators have concluded that it is just a school of fish feeding.

The most damning evidence against the “lake monster”, however, is simple geology. Most monster-hunters attribute their “unknown lake animal” as either a zeuglodon (an extinct early whale) or a plesiosaurus (a marine reptile that lived in the time of the dinosaurs). But Lake Champlain is, geologically speaking, a mere newborn: carved out by the massive glacier sheets during the last ice age, the entire lake is less than 15,000 years old—and by that time both zeuglodons and plesiosaurs were already long extinct. (Not to mention that both zeuglodons and plesiosaurs were saltwater marine creatures who would have a hard time in freshwater Lake Champlain.)

And so, while Champ is a fun local mascot, there is no credible scientific evidence at all for the existence of any large unknown animals living in Lake Champlain.