Although ironclad warships—wooden hulls covered with metal plates—were a staple of both the Union and Confederate navies in the Civil War, the first US Navy ship to be made completely of iron had already been built some twenty years before, and launched on the Great Lakes. 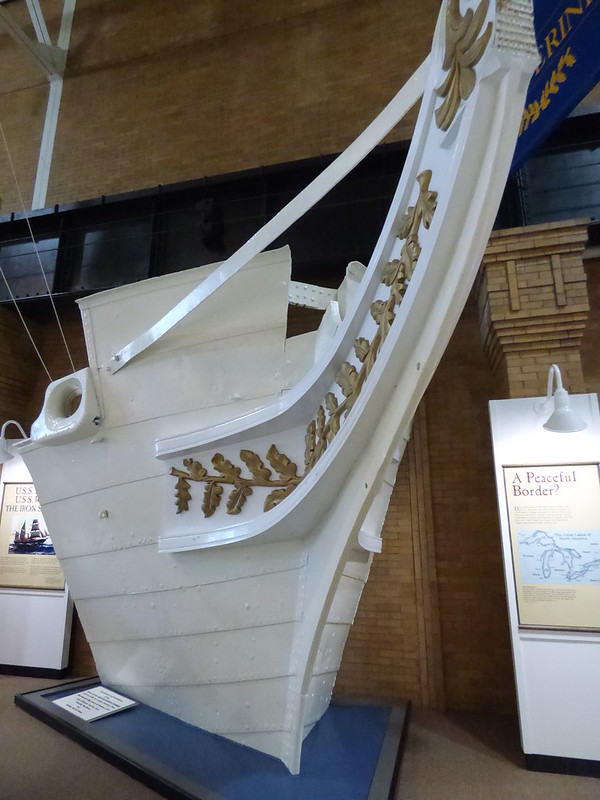 Prow of USS Michigan, on display at the Erie Maritime Museum

In 1840, tensions were rising between the US and the British colony of Canada. The two countries had already come to blows in 1776 and 1812, and since then had signed the Rush-Bagot Convention to limit their military forces along the border in order to avoid another conflict. Now, however, small bands of Canadian rebels seeking independence had camped out on the US side and were launching cross-border raids. The British Government, convinced that the US was either unable or unwilling to stop the rebels, built two gunboats and launched them onto Lake Erie to protect their border.

This brought a swift protest from the US, and in 1841 construction began on a new American warship to counter the British presence on the Great Lakes. She would be christened the USS Michigan. But this would be no ordinary ship.

There had by this time already been some preliminary experiments with iron-cladding and iron-hulled ships, mostly in England where there was a serious lack of timber available for shipbuilding. But the Michigan would be the first US Navy ship to be made entirely from iron. Partly, this was done as an experiment. But the iron hull also had practical advantages for a freshwater vessel: iron hulls were lighter and stiffer than wood, so they could be built with flatter bottoms that drew less water and were better suited for shallow rivers and lakeshore harbors. The ship was designed to be 165 feet in length. It would take two years to build her.

But no one in the US had ever constructed an iron hull before, and nobody was quite sure how to do it. The iron hull ribs and plates were manufactured in Pittsburgh, hammered into shape by hand, and then transported by wagon to the shipyard in Erie. In effect, the shipbuilders simply built the Michigan in the same basic manner as a wooden hull: the thick keel and ribs were designed to take all the stresses, and the plated hull, riveted together by hand, was not intended to be load-bearing. This had the inadvertent advantage of making the ship exceptionally strong, but the thin iron plating also made her only one-third as heavy as a wooden hull of similar size.

The Navy also decided to try out another new innovation—the Michigan would be equipped with new side-paddle wheels powered by a 170-horsepower wood-fired steam engine with two copper boilers. As a supplement, she was also fitted with three masts and full sails. She would be one of the fastest ships in the Navy, with a speed of 13-14 knots.

Originally, the ship was to be equipped with an array of guns, ranging from 32-pound carronades to 8-pound swivel guns. This brought a diplomatic protest from the British, who argued that it violated the terms of the Rush-Bagot Convention. So when the Michigan was completed in 1843, she carried only a single 18-pounder cannon.

When the time came for launch, on December 5, 1843, things did not go smoothly. A large crowd had gathered on shore to watch—most people assumed that a ship made of heavy iron could not possibly float, and they had come to see her sink to the bottom. But instead of sliding down the ramp and into the waters of Lake Erie, the Michigan became stuck halfway down, and despite an entire day of pounding and leveraging, refused to budge. The shipyard workers gave up and went home for the night. The next morning when they arrived to try again, the Michigan was already floating on the lake: the wooden blocks had snapped off and she had slid down the ramp on her own.

In 1844, the ship began regular patrols on the Great Lakes, with a crew of 106. For the most part, her life was uneventful. But during the Civil War, a group of Confederates in Canada made an unsuccessful attempt to capture the Michigan and use her to free Southern POWs being held on Johnsons Island in Lake Erie. And in 1866 a group of Irish rebels (called “The Fenian Brotherhood”) in New York launched a cockamamie plot to invade and capture Canada—they were intercepted and captured by the Michigan. After that, she was used mostly to train new sailors, though at one point she was sent as a show of force during an iron-miner strike in Michigan’s Upper Peninsula. Periodically, the ship was outfitted with newer boilers and engines. She became a highly-prized assignment for young officer graduates of the US Naval Academy, since service aboard the ship offered sea pay but also had all the advantages of nearby lake ports.

In 1905, the Michigan underwent a name change. The Navy had decided to begin using the names of states exclusively for its fleet battleships, so the name Michigan was reassigned to a modern new warship, and the old iron-hull steamship now became the USS Wolverine. Shortly afterwards, she was transferred to the custody of the Pennsylvania Naval Militia, then was temporarily restored to active duty during World War One. After the war, the Wolverine continued to make training cruises on the Great Lakes until 1923, when she suffered an engine breakdown and limped back to port in Erie.

Now, the Navy decided that it wasn’t worth the money to fix the old ship, and plans were made to scrap her. A group of local officials hoped to save the historic ship, however, and after some negotiations, the ship was instead donated to the City of Erie in 1927 and became a floating exhibit in the harbor, run by the local Boy Scouts. But funding was always difficult, and by the time of the Second World War the now 100-year-old ship was neglected and rusting. (Though virtually all of the corrosion was coming from inside of the hull due to lack of maintenance—a testament to the solid integrity of her original iron plating). She also became officially nameless: the Navy reassigned the name Wolverine to an old cargo ship that had been fitted with a makeshift flight deck and converted into a Great Lakes aircraft carrier for training new Navy pilots.

In 1948, the rusted-out derelict that had once been the USS Michigan was sold to a nonprofit group that hoped to restore her. But despite a series of fundraising efforts, they could not raise enough money. A year later, the old hull was cut up and sold for scrap. The prow was donated back to the city by the salvage company and was placed on display in a city park, where it remained for the next five decades. Finally in 1998, the Michigan’s iron prow was moved to the Erie Maritime Museum, where it is on display along with the ship’s wheel.

Although the USS Michigan had demonstrated that an iron-hulled ship was indeed practical, she had seen no combat and never fired a shot, and with her military potential undemonstrated the US continued to build wooden-hull warships until the Civil War. It wasn’t until after the famous naval duel between the ironclads Monitor and Virginia that serious efforts were once again made to produce iron-hulled warships.

5 thoughts on “USS Michigan: The US Navy’s First Iron-Hull Ship”