The sinking of the Great Lakes bulk ore carrier Edmund Fitzgerald, in November 1975, may well be the second most-famous shipwreck in history—because of a 1976 ballad by Canadian folk singer Gordon Lightfoot. 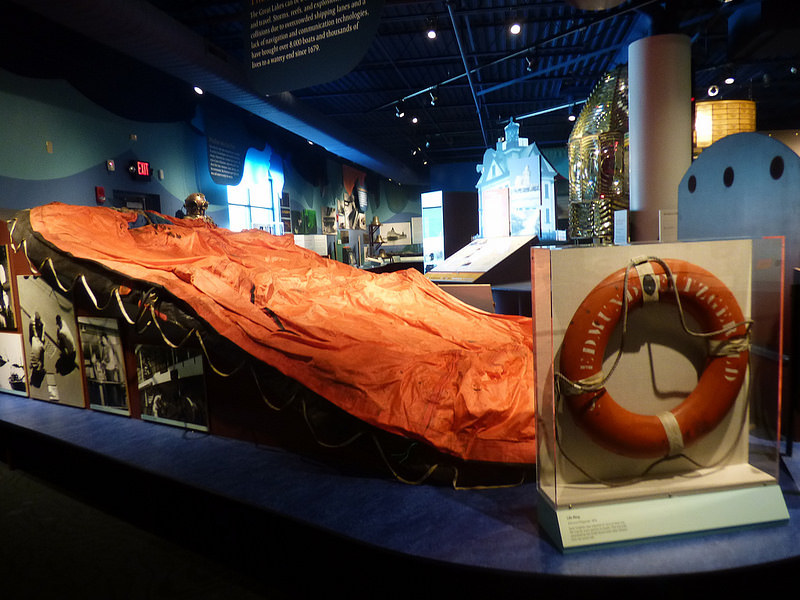 In August 1957, the shipbuilders at the Great Lakes Engineering Works in Ecorse MI laid down the keel for Hull Number 301. Christened the Edmund Fitzgerald, she measured 729 feet and weighed over 13,000 gross tons, making her, for a time, the largest ship on the Great Lakes. Over the next 17 years, the Edmund Fitzgerald crisscrossed the Great Lakes, usually hauling taconite iron ore from the mines at Silver Bay MN to steel mills in Detroit and Toledo. On November 9, 1975, the Fitzgerald loaded 26,000 tons of taconite at Superior WI and sailed away with a crew of 29 under Captain Ernest McSorley. It would be her last voyage.

Shortly after departing, the Fitzgerald was joined by another bulk carrier, the Arthur M. Anderson, under the command of Captain Bernie Cooper. The Fitzgerald, the faster of the two, took the lead, with the Anderson trailing behind by about ten miles. Although the weather was fair, severe storms were moving in, and the two captains decided to take the more protected northern route across Lake Superior to shelter in Whitefish Bay in Canada. It was 5pm.

Shortly after 7pm, the weather deteriorated. Fifty-knot winds pushed the lake into 15-foot waves. But both captains had sailed in similar weather before, and nothing appeared to be amiss.

Then, a little after 3 in the afternoon on the next day, November 10, something unusual happened. On his radar scope, Captain Cooper of the Arthur Anderson watched as the Edmund Fitzgerald passed dangerously close to Six Fathom Shoals, a hazardous shallow area of rocks and reefs. Then, fifteen minutes later, Cooper received a radio message from McSorley: “Anderson, this is the Fitzgerald. I have a fence rail down, two vents lost or damaged, and a list. I’m checking down. Will you stay by me till I get to Whitefish?” Cooper said he would, then asked if he had his water pumps going. “Yes,” McSorley responded, “both of them.” The Fitzgerald was taking on water.

Over the next three hours, the storms got worse, with 60-knot winds and waves up to 25 feet. The waves were so high that they blocked out the Anderson’s radar signal from the Fitzgerald, and Cooper watched as the Fitzgerald’s blip winked in and out. Just after 4pm, McSorley radioed Cooper to ask for navigational help: “Anderson, this is the Fitzgerald. I have lost both radars. Can you provide me with radar plots till we reach Whitefish Bay?” At around 5:45pm, the Fitzgerald was contacted by another ship in the area, the Avafors, and confirmed: “I have a bad list, lost both radars. And am taking heavy seas over the deck. One of the worst seas I’ve ever been in.” The Avafors replied: “If I’m correct, you have two radars,” and the Fitzgerald responded with: “They’re both gone.”

Then, around 7pm, the Arthur Anderson was rocked by two immense back-to-back waves that struck her from astern, washed their way up the entire deck, and briefly pushed her entire bow underwater. The Anderson’s First Mate, Morgan Clark, called to Captain McSorley on the Fitzgerald:

“Fitzgerald, this is the Anderson. Have you checked down?”

“Fitzgerald, we are about 10 miles behind you, and gaining about 1 ½ miles per hour. Fitzgerald, there is a target 19 miles ahead of us. So the target would be 9 miles on ahead of you.”

“By the way, Fitzgerald, how are you making out with your problems?”

“We are holding our own,” McSorley replied.

“Okay, fine,” Clark concluded, “I’ll be talking to you later.”

About ten minutes after that, the Fitzgerald entered a rain squall which blocked her radar signal. On board the Anderson, Captain Cooper watched as the Fitzgerald’s radar blip winked off again. But this time, after several minutes, it did not reappear, and when First Mate Clark tried to contact McSorley at 7:22pm, he got no response. After confirming with several other ships that no one could establish contact with the Fitzgerald, Cooper notified the Coast Guard. But the Coast Guard was already conducting a search for a smaller ship that had also been reported missing, and in the absence of any definite indication that the big bulk carrier was in danger, they gave the smaller ship priority. It wasn’t until a half hour later, when there was still no contact with the Fitzgerald, that the Coast Guard dispatched a helicopter and a cutter. In the meantime, since the closest available vessel was the Anderson herself, the Guard asked her to go out and search, and, reluctantly, Captain Cooper, who had reached shelter in Whitefish Bay by this time, turned around and went back. He found two lifeboats and some floating debris, but no sign of the ship or survivors. The Fitzgerald had gone down with all 29 of her crew.

Several days later, a Coast Guard aircraft with a magnetic detector found what was presumed to be the wreck, and a submersible camera vehicle confirmed that it was the Edmund Fitzgerald. She had broken in half, with her fore section sitting upright on the lakebed and her aft section upside-down about 170 feet away.

After an investigation, the Coast Guard concluded that a definitive cause of the sinking was impossible to determine, but “the most probable cause” was that the topside cargo hatches had not been closed securely, allowing the high waves to wash over the deck and flood the cargo hold. That conclusion, however, brought immediate objections from several sources, including Captain Cooper, who concluded instead that the Fitzgerald had already been damaged by hitting the rocks at Six-Fathom Shoals and was taking on water, and when the two large waves that had hit his own ship went on to strike the Fitzgerald, they pushed the bow under water—a condition from which, in her already-damaged state, she could not recover. This was also the conclusion reached by the National Transportation Safety Board. Today, the cause of the ship’s sudden sinking is still the subject of debate and controversy.

The year after the Edmund Fitzgerald was lost, Canadian singer Gordon Lightfoot wrote and recorded “The Wreck of the Edmund Fitzgerald”, which told the story. It became a Top-40 hit. In 1995, at the request of the victims’ relatives, a diving team was dispatched to recover the ship’s bell from the wreck. The site was then declared an “underwater gravesite”, and any further diving on the ship is forbidden.

Today, one of the lifeboats and a flotation ring from the Fitzgerald, recovered during the search, is on display at the Museum of the Great Lakes, in Toledo OH.

2 thoughts on “The Wreck of the “Edmund Fitzgerald””