In June 1933, a shootout took place at the Union Station train depot in Kansas City MO, as gangsters with machine guns tried to free a prisoner being transported by FBI agents. It became known as the “Kansas City Massacre”. 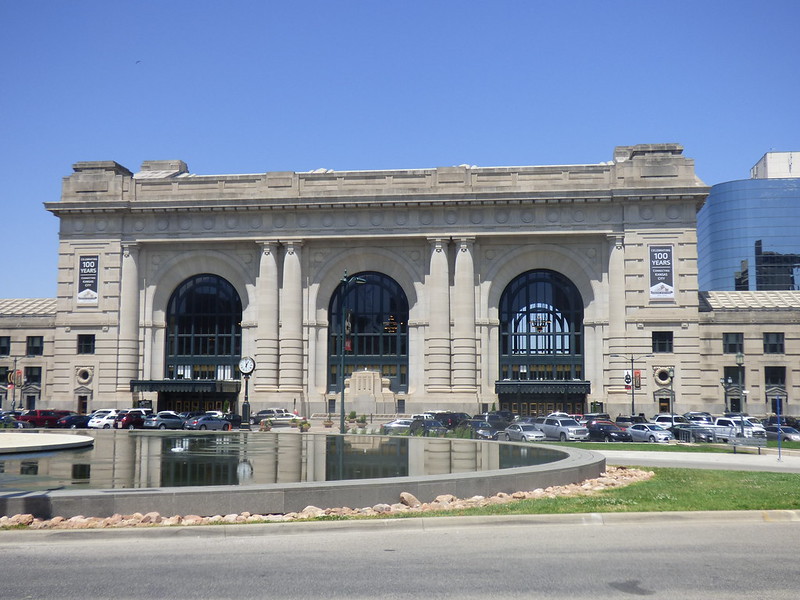 In 1933, Kansas City was a mob town. Local crime boss Johnny Lazia had extensive ties to political boss Tom Pendergast and city manager Henry McElroy, and a series of bribes insured that the rackets ran freely. It was akin to Al Capone’s 1920s Chicago. A veritable who’s who of Depression-era gangsters and bank robbers passed through Kansas City, including Pretty Boy Floyd, Bonnie and Clyde, Machine Gun Kelly, Alvin Karpis, and the Barker Gang.

One of the area’s criminals was Frank “Jelly” Nash. Over the years Nash had been jailed twice, for murder and for safe-cracking, but his extensive network of underworld friends had always managed to pull some politial strings and get him pardoned. In 1924, Nash was convicted again, of robbing a US Mail train, and was sent to Fort Leavenworth prison for 25 years. This time there was no pardon. But in October 1930 Nash managed to escape from prison. As a Federal prisoner, Nash came under the jurisdiction of the Federal Bureau of Investigation. Working with local law enforcement, the FBI began looking for Nash throughout the midwestern US and up into Canada. When a carefully planned jailbreak occurred at Leavenworth in December 1931, the FBI concluded that Nash was one of the people who had provided outside help to the escapees, and they redoubled their efforts to find him. They finally got a break in July 1932, when Francis Keating and Thomas Holden, two bank robbers who were close associates of Nash, were arrested in Kansas City. From them, the FBI learned that Nash was hiding out in Hot Springs AK. Federal agents caught up with Nash on June 16, 1933, arresting him as he was buying cigars in a local store.

At 8:30 that night, Nash was placed in a car with two FBI agents, Frank Smith and Joseph Lackey, and an Oklahoma police chief, Otto Reed, and driven to Fort Smith AK to board a train for Kansas City, where he would be ferried back to Leavenworth. The train was scheduled to reach Union Station at 7:15 the next morning. Smith and Lackey contacted the FBI agent in charge in Kansas City, Reed Vetterli, to arrange for agents to meet them at arrival.

The criminal network’s intelligence sources were just as good as the police’s, however, and Kansas City crime boss Lazia knew about Nash’s arrest and impending arrival almost as soon as the local FBI office did. And so a plan was hatched by one of his underlings, a bank robber and strong-arm man named Vernon Miller, to free Nash when he arrived at the train station. Through a number of intermediaries, Miller recruited a number of gunmen who met with him at a local tavern to plan the ambush.

When the train arrived at Union Station the next morning, Nash and his captors were met by FBI agent in charge Vetterli and another agent, Raymond Caffrey, and two Kansas City police detectives, Frank Hermanson and W. J. “Red” Grooms. Handcuffed, Nash was led to two cars parked out front, which were to drive him to Leavenworth.

At that moment, though, three or four gunmen appeared, weilding Thompson machine guns. One of them yelled “Up! Up! Hands up!” Detective Grooms pulled out his pistol and fired two shots, one of which seemed to hit one of the gunmen. At this, somebody shouted “Let em have it!” and a flurry of machine gun fire burst out, lasting some twenty seconds. Grooms, Hermanson, Caffrey and Reed were killed; Vetterli and Lackey were wounded. Also killed, hit in the back of the head, was Jelley Nash, the target of the intended rescue. According to the survivors, several of the gunmen ran up to the car and looked inside, then one of them shouted “They’re all dead! Let’s get out of here!” and ran to a nearby car.

The “Kansas City Massacre” caused a press sensation. J Edgar Hoover, who ran the FBI, carefully guarded the public image of his agency, and with several of his agents killed and wounded in a spectacular shootout in broad daylight, he gave the investigation top priority. Through its network of informants, the FBI quickly determined that Vernon Miller had planned the attack, and launched a nationwide manhunt for him. But the mob got to Miller first: during an argument, Miller had shot a member of the New Jersey Mafia, and in retaliation he was abducted, tortured, killed, and his body dumped into a ditch near Detroit in November 1933.

Investigators, meanwhile, had found fingerprints in Miller’s house that were identified as Adam Richetti, the partner of Charles “Pretty Boy” Floyd. Floyd had also been identified by one of the surviving lawmen as one of the gunmen who was shooting at them. Richetti and Floyd were surrounded by police in Ohio in October 1934, and in the subsequent shootout Floyd managed to escape while Richetti was arrested. Floyd was then cornered and killed a few days later. Richetti was charged with being one of the shooters in Kansas City, and was convicted and executed. Meanwhile, four associates of Vernon Miller were charged with conspiracy in the Massacre, and were also convicted.

Since then, the shooting has been the subject of speculation. Some researchers have concluded that the intent of the gunmen was not to rescue Nash but to intentionally kill him, presumably to silence him in case he started talking to avoid another stint in prison. Other researchers have concluded that Richetti and Pretty Boy Floyd were not actually involved in the shooting.

The Kansas City Massacre also had some unintended victims. The famed outlaws Bonnie Parker and Clyde Barrow and their gang arrived in Kansas City just weeks after the shooting, and the publicity and heightened fears from the Massacre led to somebody noticing them in their hotel room. They were surrounded by local law enforcement and shot their way out, with Clyde’s brother Buck fatally wounded in the fight and his wife Blanche wounded and subsequently captured.

The shooting also changed the FBI. Until the Massacre, the FBI had functioned mostly as an investigatory agency: its agents were unarmed and did not have authority to make arrests. In the aftermath of the crime, Congress passed new laws designating the agents as law enforcement officers and granting them the legal powers to make arrests and to carry weapons.

4 thoughts on “The Kansas City Massacre”