One of the oft-neglected aspects of the First World War was the use of colonial troops and ethnic minorities in the trenches, including large numbers of French Algerians and British Indians. The Germans used several units of ethnic Danish troops, and this led to one of the most unique stories of the war—when one man ended up serving in first the German and then the American Army. 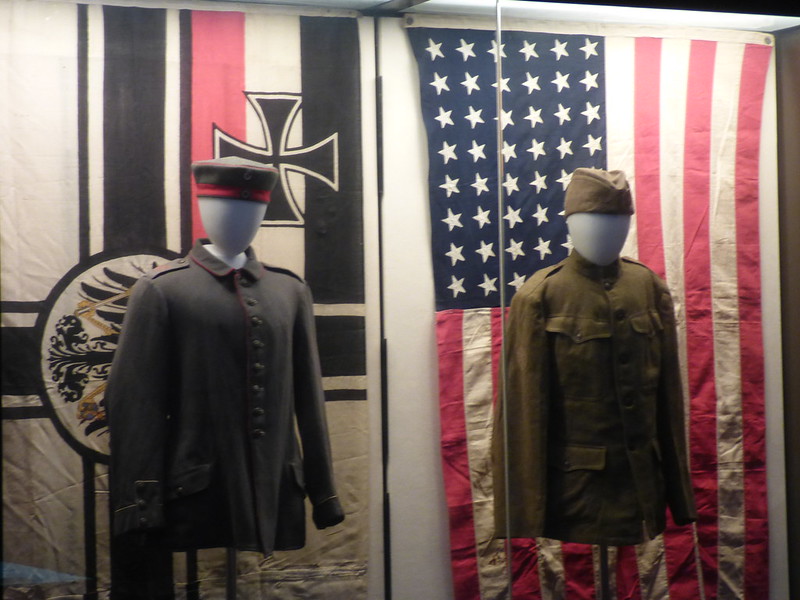 In 1864, the German state of Prussia, as part of the Second Schleswig War, invaded Denmark and captured the two small duchies of Holstein and Schleswig. These were annexed and later, when the Prussian leader Bismarck unified with other provinces, became part of the new country of Germany. As part of the annexation process, the Danes in Schleswig were “Germanized”: they were pushed into adopting German culture, and their children were taught only German in school. A large number of these “Schleswigers” however still retained their Danish identity, continuing to teach the Danish language to their children. Over time, the Schleswigers became integrated into the German state. They had their own elected representatives in the Reichstag, and the largest city in the area, Flensburg, was inhabited mostly by Germans who had moved in. And, as German citizens, they were subject to military service: 20-year old males were conscripted for two years and were subsequently subject to mobilization in the event of a crisis.

When the First World War broke out in August 1914, however, attitudes in the region changed. As it happened, 1914 was the 50th anniversary of the Second Schleswig War, and the German celebrations led to some cultural and political tensions with the Danish minority. So as mobilization began for what was assumed to be a short war with Russia and France, the Kaiser’s government quickly made it clear that it did not trust its Danish citizens: some 300 Schleswigers were arrested as potential security risks, and all of the Danish-language newspapers in Germany were closed down.

Nevertheless, the outnumbered Germans needed as many troops as they could get for the war, and some 26,000 Schleswigers were mobilized with the Imperial German Army. Most of them were organized into the 84th Fusilier Regiment, the 86th Fusilier Regiment, and the 86th Reserve Regiment. They were sent into France, where they fought in the crucial early battles, including Mons, the Marne, and Esternay. In one particularly heavy day of fighting, near Moulin in June 1915, the 86th Regiment lost over 1,000 casualties.

Although the Danish soldiers fought well and had desertion rates no higher than the German units around them, the Army continued to question their loyalty. After the defeat at Moulin, there were accusations that Danish spies had given battlefield information to the Entente. These suspicions were strengthened after the French and British opened up special POW camps exclusively for Schleswigers who surrendered, with privileges not held by other POWs. The Germans labeled them “traitor camps”. Since the German Army’s censors could not read the Danish language, regulations were issued requiring all letters sent home by the troops to be written in German—which most of the Danish soldiers pointedly ignored. Although resentment was growing at the way they were being treated, the Schleswigers continued to perform well on the battlefield, playing active roles at the Battles of Verdun, the Somme, Arras and Cambrai. Casualties among the original Danish conscripts were eventually replaced in the units with fresh draftees from other parts of Germany, and by 1918 only around half the members of these regiments were still Danish. During the course of the war, the 26,000 Schleswigers suffered casualties of 4,000 dead, 6,000 wounded, and 4,000 captured.

One of the Schleswigers who was conscripted for the war in 1914 was Christian Celius Nicolaisen, from the city of Skoolburg, who was assigned to the 86th Fusiliers (known as the Queen Augusta Victoria Regiment). At first, like most other soldiers from both sides who marched off in August 1914, Nicolaisen was excited by the adventure and assumed the war would be over quickly. When it bogged down into a bloody and muddy stalemate, though, he became disillusioned and then angered by the treatment he and his fellow Danes were receiving from the Germans. When he got word in the summer of 1915 that his brother Soren had been killed fighting in Russia, Nicolaisen decided to desert.

In the trenches, “desertion” was often a topic of whispered conversations among the Schleswiger soldiers, though for the most part it never went beyond talk. The Holstein-Schleswig region bordered upon neutral Denmark, and there was a secret network of smugglers on both sides of the Danish border that helped deserters and defectors. In all, at least 2500 people are known to have crossed into Denmark during the war, including Schleswig soldiers (many deserters, in addition, were ordinary Germans, including antiwar activists and Socialists who defected for political reasons).

So although Nicolaisen had to plan his defection secretly, he was not without outside resources. In late 1915 he secured a three-day pass to go to Hamburg on leave, then, still in uniform, bought a train ticket for Skoolburg. There, friends and family obtained civilian clothing for him and helped him cross the border. Once in Denmark, Nicolaisen contacted his brother Jens, who lived in the United States. After making arrangements, Christian booked passage to New York on the passenger ship Frederick VIII, entered the US in late 1915 at Ellis Island, and joined his brother in Bridgeport CT, where he worked as a machine mechanic.

The United States had sat out the first three years of the war: popular sentiment in the US viewed it as a European conflict that did not involve the US. Nevertheless, as the trench war bogged down into crushing stalemate, both the Entente and the Germans knew that America would play the decisive role. The French and British did all they could to try and woo the US into joining the Entente alliance. The Germans, meanwhile, played their hand rather clumsily: first the German Navy antagonized the Americans by targeting neutral shipping with its policy of “unrestricted submarine warfare”, then the Kaiser’s diplomatic corps tried to recruit Mexico to invade the US. The Americans entered the war against Germany in April 1917.

But the United States at the time had virtually no military force. To raise an army quickly, President Woodrow Wilson had to conscript a large number of soldiers and equip them with French and British weapons. And now Christian Nicolaisen, as an American citizen, was subject to the draft. He was assigned to the 504th Engineers and sent to France, where he worked in the rear areas behind the lines repairing motor vehicles. He is, as far as is known, the only soldier in the First World War to have served in both the German and the American Armies.

In November 1918 the armistice was signed to end the war, and in 1919 the official peace treaty was drawn up in Versaille. As part of the terms, a referendum vote was held in Schleswig-Holstein to determine its political future: the rural northern section voted to return to Denmark, while the cities in the southern region elected to remain part of Germany.

Christian Nicolaisen returned to Connecticut in June 1919. His German service uniform (and his Model 98 bolt-action rifle), meanwhile, remained with his family in Denmark, then made its way to relatives in the United States. And, almost 100 years after the war, Nicolaisen’s great-nephew, in Billings MT, donated his rifle and both his German and American Army uniforms to the National World War One Museum in Kansas City, where they are on display.