Button Gwinnett is one of the more obscure signers of the Declaration of Independence. He is probably best known for his character in the musical “Hamilton”, and for having one of the most-valued autographs in the world. 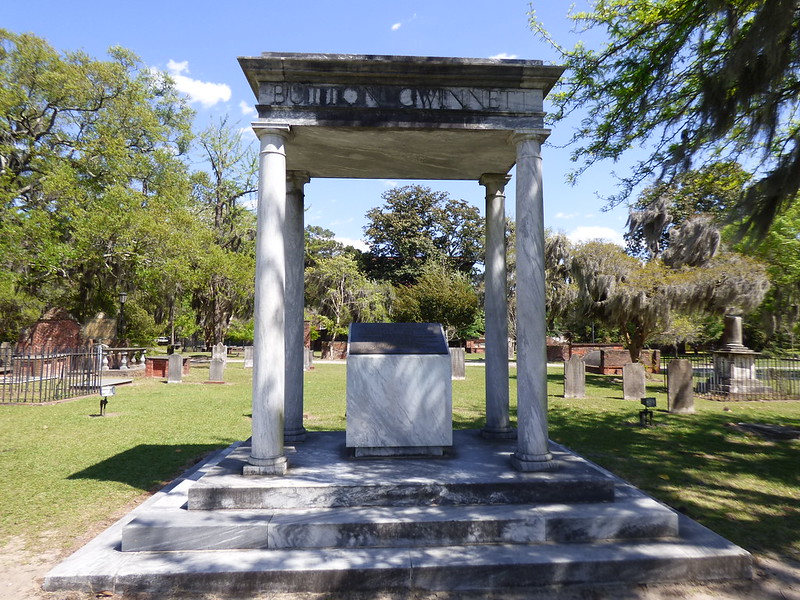 As a young man, Button Gwinnett was a merchant in Bristol, England, where he owned the small ship Nancy which carried cargo to and from the colonies. Never a very good businessman, Gwinnett soon fell into debt, and his ship was seized and sold to creditors. In 1765 he, like so many other Englishmen, decided he would have better luck in the colonies, and sailed for Charleston SC.

Gwinnett spent the next two years as a trader, first in Charleston and then in Savannah, before purchasing a small plantation in Sunbury GA. Here he met Lyman Hall, a recent arrival from Connecticut, who had been involved with some of the rebellious political sentiments that were simmering in New England. Gwinnett in turn now took an interest in politics, and was appointed a Justice of the Peace in 1767 and elected to the House of Assembly a year later. His district was made up mostly of small rural farmers, like himself, who resented the large plantation-owners and wealthy urban merchants who dominated the colony’s economy and politics.

Although his business ventures were tottering (he had once again fallen into debt and had his properties siezed by creditors in 1773), his political career was more successful, and he served in the colonial Assembly for five years.

By this time, all of the American colonies were swept up in protest at London’s arbitrary rule, and political sentiment was at a fever pitch. The British Government had expended an enormous amount of resources to defend the colonies during the French and Indian War a few years previous, and now they thought it only proper that a series of taxes be imposed on the colonies to help defray the costs of the war. Colonial rebels, in turn, objected that these taxes were put into place without any input from the colonies, who had no delegates to the British Parliament. “No taxation without representation!” became a rallying cry, and a wave of discontent swept all thirteen of the English colonies in North America.

At first, Gwinnett thought that resistance to such a rich and powerful empire as Britain was a hopeless goal, but his friend Lyman soon convinced him otherwise, and they both began active roles in the local “patriot” movement. When the colonial rebels set up their own “General Assembly” to act as a state government, Gwinnett was elected as a member, and was appointed as General in command of the state’s militia forces. This, however, provoked both criticism of his lack of experience and political opposition from the Whig faction of urban merchants and rural plantation-owners, and he was quickly removed and replaced by Lachlan McIntosh, a militia officer who had already fought British troops at the Battle of the Rice Boats. Although Gwinnett was then appointed (along with Lyman) as one of the three Georgia delegates to the Continental Congress in Philadelphia, arriving there in May 1776, it was the beginning of a bitter personal and political feud between him and McIntosh.

The American Revolution did not begin as an independence movement. Initially, the colonials wanted only to have an input into the policies that affected them through elected representatives in the British Parliament—something which they viewed as their basic right as Englishmen. British colonial policy was, however, unbending: London ruled its colonies by fiat. When an obscure writer named Thomas Paine published an anonymous pamphlet titled “Common Sense”, it proposed the only realistic way out of this impasse: independence.

The debate in the Continental Congress was short but sharp. While a few people still wanted to try to reach some sort of political accomodation with London, most delegates agreed that the American colonies needed their own independent government. On July 2, Button Gwinnett became one of the delegates who voted for independence, and signed the resulting Declaration a short time later before returning to Savannah.

As a member of the Georgia Assembly, Gwinnett now served on the subcommittee which drafted the new State Constitution, and was elected as Speaker in October. Then, when the President of the Assembly died unexpectedly in March 1777, Gwinnett was appointed to fill in, making him the effective leader of the state government. He immediately began planning for a military expedition, to be led by militia commander McIntosh, which would capture the British-held city of St Augustine in Florida, thereby protecting Georgia’s southern border.

Instead, the campaign turned out to be a disaster, and the feud between the two men boiled over once more. Gwinnett and McIntosh publicly blamed each other for the failure, and Gwinnett began arresting officials whom he deemed “disloyal”, including McIntosh’s brother. After Gwinnett lost the election for Assembly President in May, McIntosh made a speech referring to him as a “liar” and “scoundrel”. No Southern gentleman could bear such an attack on his honor, and Gwinnett promptly challenged McIntosh to a pistol duel.

They met on a field outside of Savannah on May 16. In the exchange both men were hit, but Gwinnett’s wound became infected and he died on May 27. He is buried in the Colonial Park Cemetery in Savannah GA.

Because Gwinnett died young and served only a short time in political office, he did not sign many documents or write many letters, and only 51 of his signatures (most of them on IOU’s) are known to still exist—and just ten of these are available for collectors. As a result, his autograph is one of the most highly-valued in existence, selling for as much as $722,000.