The history of aviation is full of colorful figures, but Jean-Pierre Blanchard may be one of the most colorful. 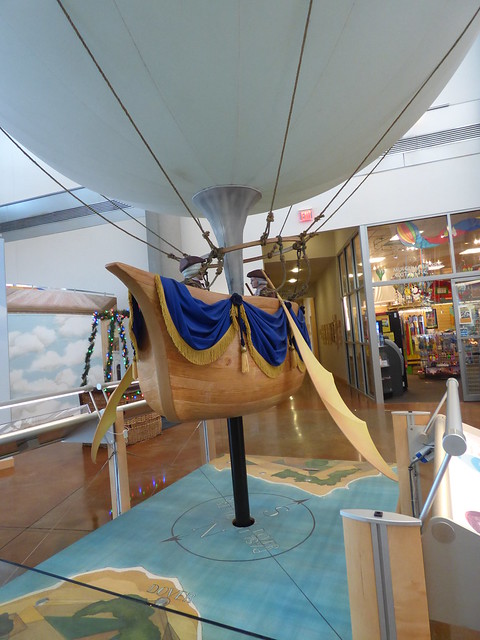 Born into a poor family in Normandy, Blanchard was largely self-educated. As a young man, he had developed an interest in science and mechanics, and had designed and built his own model of velocipede, an early pedal-less bicycle, and then designed a new hydraulic pumping system. By the 1770’s, Blanchard had already turned to the problems of flight and was working on building a pedalled bicycle with flapping wings, rowed and steered by paddle-like oars. Although it never had any chance of actually getting off the ground, Blanchard was, to put it bluntly, a self-promoting BS artist, and he loudly claimed to have made several flights with his contraption. No one believed him.

After the successes of the Montgolfiers and Charles, however, Blanchard was quick to adopt something that really could fly, and he built his own hydrogen balloon in March 1784. Hoping to improve upon the design, he began to fit his balloon with a variety of flapping wings, aerial screws, and paddle-oars that he had earlier tried out on his “flying bicycle”. And to finance and promote his experiments, he moved to London and began carrying paying passengers for rides. Here, Blanchard got himself into trouble when a wealthy doctor named Sheldon hired him to carry a barometer and other weather instruments aloft, and Blanchard threw them overboard during the flight to lighten the ballast.

One of the Londoners who paid for a trip in Blanchard’s balloon was Dr John Jeffries. Born in Boston, Jeffries had served as a surgeon in the British Navy during the American Revolution, and had fled to England after Independence. After a balloon flight together, the American expat and the mercurial French aeronaut became unlikely friends, and together they decided to attempt a feat that they knew would guarantee a place in the history books–they would fly across the English Channel.

They were not the first ones with that goal in mind. Jean Francois Pilatre de Rozier, who had piloted the first manned balloon flight in Paris, made an attempt to fly from France to England in January 1875. The balloon caught fire on the way, and Rozier and his partner were both killed when they crashed into the Channel. Blanchard and Jeffries, after three weeks of waiting for favorable winds, would take off just a few days later, on January 7.

They almost didn’t get off the ground. As part of Blanchard’s experiments, the balloon had been fitted with silk-covered paddles and a rudder along with a hand-cranked propeller, and was seriously overweight. But the oddest part of all was that Blanchard, ever the shameless self-promoter, had hatched a scheme to keep Jeffries (who was financing the entire adventure) on the ground and enable himself to make the flight alone and get all the glory. While the balloon was being inflated, Blanchard barricaded himself into a room at Dover Castle and locked Jeffries out, hoping he’d leave. It took an intervention by the castle’s governor to talk Blanchard out. Then, when the inflated balloon was tested for lift and refused to rise, Blanchard calmly announced that the balloon was already too loaded to carry Jeffries’ weight, and helpfully offered to make the flight anyway, alone. Jeffries, with what must have been amazing patience, searched the Frenchman, and found he was wearing a leather pouch-belt filled with lead shot.

Once they took off and headed out over the water, however, the pair found that their balloon really was too heavy and was unable to climb to a safe altitude. As they skimmed just above the waves, they began throwing out all of their ballast weights. When that didn’t work, they broke off and tossed all of the gondola’s wooden decorations, then the useless paddle and propeller gadgets, and finally all the ropes and other loose equipment. As they approached the French coastline, they desperately tried to lighten the load even more, first by relieving themselves over the side of the gondola, then by disrobing and tossing their clothes into the Channel. One wonders if, had worse come to worse, Blanchard would have attempted to throw Jeffries overboard as well. Fortunately, things never got to that point, and the balloon barely cleared the trees and reached France. Blanchard and Jeffries had landed clad only in their underwear, but they had made it.

After their flight, the two men, now world-famous, went their separate ways. Jeffries returned to Boston and worked as a doctor until his death in 1819. Blanchard toured Europe giving balloon rides, was granted a Royal Pension by the King of France, then went back to London and formed a ballooning school. There, he apparently went back to his old BS-ing ways, and after one flight he proclaimed that he had landed at the exact spot that he had taken off from–an impressive feat of navigation. Alas, it didn’t take long for people to discover that he had actually landed miles away, and had a team of horses carry his balloon back to the starting point.

When his “Aeronautical Academy” in London failed, Blanchard went back to Paris. After the French Revolution broke out in 1789, he was arrested in Austria for printing revolutionary pamphlets, and escaped to the United States. Here, in 1793, he made the first balloon flight in the US, then began a series of early experiments with parachutes, tying cloth prototypes onto cats and dropping them out of balloons. Once again the tireless self-promoter, he also claimed to have made several successful parachute jumps himself, but, unable to substantiate his feat or duplicate it publicly, he lost all credibility and returned to Europe. In 1808, during preparations for a balloon flight in Holland, Blanchard suffered a heart attack and fell some 50 feet from the gondola, causing injuries that left him mostly bed-ridden until his death in March 1809.

Today, the barometer that Blanchard and Jeffries carried with them on their cross-Channel flight is on display at the Smithsonian’s Udar-Hazy Center, and the International Balloon Museum in Albuqerque NM has a large-scale model of their balloon gondola.

For the next 125 years after these achievements, lighter-than-air balloons remained the only method of flight, and they steadily became bigger and more sophisticated. When lightweight gasoline engines became available in the 1890’s, steerable “airships”, which used hydrogen bags for lift and engine-driven propellers for steering, began to appear. Airships were used for a variety of civilian and military uses until the 1930s, when airplanes became cheaper, faster and safer.