The 1957 movie Bridge on the River Kwai may be one of the most famous war movies ever made, winning seven Oscars including Best Picture and Best Actor for Alec Guinness. But the reality was a bit different than the movie. 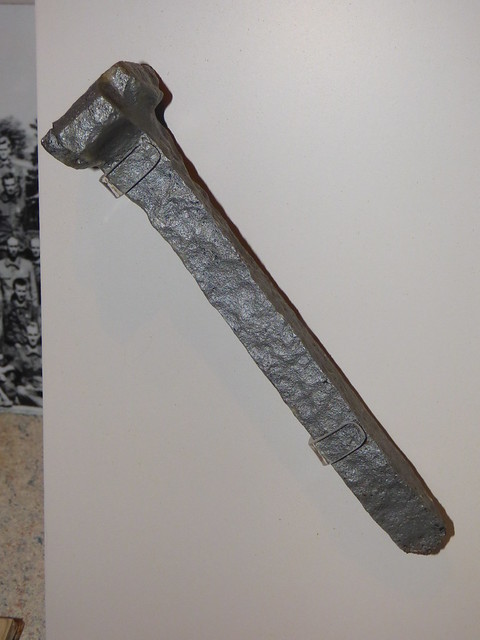 Spike from the Burma Railroad

When the Japanese launched their lightning attacks in December 1941, they not only targeted the American fleet and its island bases, but also attacked the British possessions in southeast Asia, including Singapore. The British were confident that the heavily-defended fortress was impregnable: instead, it fell in a matter of weeks. By February of 1942, the Japanese themselves were not prepared for the speed of their victories: they had not expected to be required to keep and feed some 40,000 POWs, and, although they now contemplated extending their conquests perhaps as far as India, they had also begun to outrun their own supply lines.

The Japanese decided to solve both problems at once. In the 1890’s, the British government had surveyed a route between Thailand and Burma for a railroad that could move people and supplies. After some initial planning, they gave up, concluding that it would be too costly, in terms both of finances and of diseases and hardship in the thick jungle terrain, to build such a railroad. But now the Japanese Army took up the matter. By the summer of 1942, the US Navy was already attacking Japanese cargo shipping with submarines, and commanders in Tokyo thought that an overland railroad would be a safer way to carry supplies from ports in Bangkok, Thailand, to supply centers in Rangoon, Burma, for use by troops in China or India. And now, thanks to the 300,000 POWs from Malaya, Singapore and the Philippines, they had a large available labor force to do it.

Using POWs for war-related work was illegal under the Geneva Conventions, but the Japanese General Yamashita had extracted a promise from British General Percival, as part of the surrender terms, that he would not object to what in effect became forced labor. So the Japanese Army now moved thousands of POWs—some in cramped and crowded trains, some in long marches on foot—and tens of thousands of conscripted Korean, Malaysian, and Chinese laborers. The proposed railroad was begun from two places about 260 miles apart (Nong Pladuk in Thailand and Thanbyuzayat in Burma), with the tracks gradually growing towards each other until they met in the middle. Thousands died during the transport from poor food, dysentery, vitamin deficiencies like beri beri, and fungal infections known simply as “jungle rot”; tens of thousands more, over one-fourth of the entire workforce, would die during the actual construction. At a spot called Konyu, a 500-yard stretch of railroad was laid in a gap that was carved through a mountain ridge by hand, by POWs with picks and shovels. Of the 1,000 men who began the initial digging, only 100 survived.

One of the British officers who worked on the railroad was Lt Col Philip Toosey, who had been at Dunkirk, had shipped out from England for the Middle East and was diverted to Singapore after the Japanese attack, and was surrendered there. Toosey and 3,000 British, Dutch, and Australian POWs were taken to a place called Tamarkan in Thailand, near the village of Kanchanaburi, at the junction of the Mae Klong and Kwai Noi rivers. Here, the prisoners were put to work building two temporary wooden bridges. Although the railroad track would not actually cross the river here, it would run along these two elevated wooden bridges in order to protect it from flooding. Once the temporary bridges were finished, the POWs would immediately begin work to build new permanent ones next to them with concrete pilings and steel spans. (Of the 688 bridges that would be built along the railroad, only nine were eventually finished with steel and concrete.) These are the events upon which the film would later be based.

In 1952, a French writer named Pierre Boulle finished a novel. Before the war, Boulle had been an Army engineer working at a rubber plantation in Malaya when the Japanese invaded, and he became a prisoner—not of the Japanese, but of the Vichy French—and spent the next four years in an internment camp near Hanoi. His novel, Bridge on the River Kwai, was based partly on his own experiences as a prisoner, and partly on stories that he heard from other POWs, some of whom had worked on the Burma railroad. (A few years later, Boulle would go on to write another novel, entitled Planet of the Apes.)

In 1955, Hollywood producer Sam Spiegel became interested in the story of the POW-built railroad, and commissioned a script by Carl Foreman and Michael Wilson (both of whom were blacklisted by the McCarthyites, and neither of whom were credited for the eventual movie). Spiegel then purchased the film rights to Boulle’s book and had him draft a screenplay. The final script for Bridge on the River Kwai was, then, a creative mixture of these two sources, plus some other added elements (to appeal to audiences in the US, a new character was created, played by William Holden, who portrayed an American saboteur sent to blow up the bridge). Alec Guinness would play the central role of British officer “Colonel Nicholson”, who was locked in a battle of wills with the Japanese commander “Colonel Saito”, played by Sessue Hayakawa.

In the movie, the British officer argues vehemently with the Japanese over the conditions in the camp and the illegality of using POWs to build the bridge, an argument which ended only when the Japanese technicians fail to make progress on the bridge and are forced to turn to the POWs to design and build it for them. All of this was Hollywood drama. The Japanese were in fact expert engineers, and the POWs were nothing but manual laborers and had no technical or engineering input. There were also no debates with the Japanese over legalities (the Japanese officers would not have tolerated being questioned by a POW), and the best that the real-life Colonel Toosey could do was cajole them into providing at least a modicum of food and medicine so the laborers could do more work on the construction.

The movie’s most dramatic scene, of course, happens when the newly-finished bridge is sabotaged and destroyed by the POWs who had built it. At the time it was made, the explosion scene was the most expensive shot in movie history. Rather than using a miniature, the production crew built an entire full-sized bridge in a valley in Sri Lanka, and wired $50,000 worth of explosives onto the span and the train that would run along it. Six cameras would cover the shot: one of these was aboard the train. The cameramen were to start their cameras and then jump clear of the explosions. On the first attempt to film the scene, though, one of the cameramen failed to get away, and the explosives weren’t triggered: the fullsize locomotive was run off the end of the bridge into a pile of sandbags. Two days later, after doing some necessary repairs, the shot was ready again. This time, everything went to plan: the bridge went up in a spectacular fireball, and the train plunged dramatically into the deep gorge below.

The reality was different. The two permanent steel bridges at Tamarkan were finished in May 1943, and the entire length of the Burma railroad became operational in October. The Japanese would run trains here for nearly the next two years, first carrying almost half a million tons of supplies up to troops in China, and then carrying two entire divisions of retreating Japanese soldiers back from the front. During this time, the temporary wooden bridge spans, which remained in place as backups, were bombed and destroyed nine times by Allied air raids, and rebuilt. (On one of these raids, a stray bomb accidentally hit the POW camp.) The steel and concrete bridges were attacked and briefly damaged several times by British and American bombers, but it wasn’t until June 1945 that the RAF managed to destroy both of them.

After the war, 111 Japanese Army officers were charged with war crimes in connection with the construction of the Burma railroad. In all, about 13,000 Allied POWs and 100,000 Asian laborers died while working on the project.

Today, a railroad spike from the “Railroad of Death” is on display at the US National POW Museum, inside the Andersonville Prison Camp National Historic Site in Georgia.

10 thoughts on “Bridge on the River Kwai: The True Story”