During the Civil War, a band of Lumbee Indians in North Carolina known as the Lowry Gang waged a “Robin Hood” war against the white aristocracy, and became a local legend. 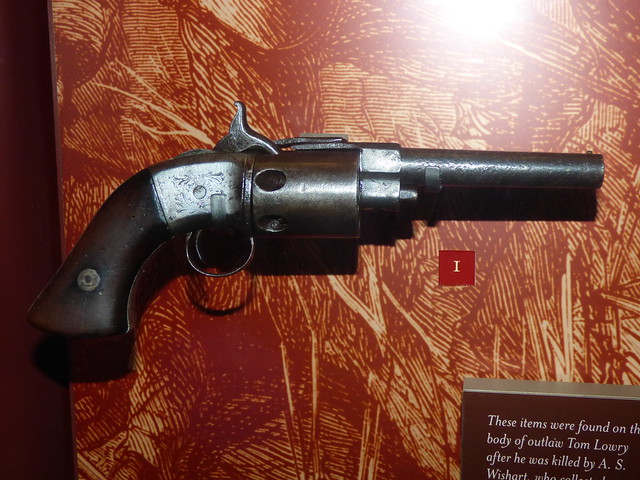 The mid-19th century was a time of tragedy for Native Americans in the US. The policy of the United States was “removal”, in which native tribes were forcibly relocated to the “Indian territory” in Oklahoma. In the most famous instance, the Cherokee Nation appealed their removal all the way to the Supreme Court, which ruled in their favor. The tribe was forcibly deported anyway, with President Jackson famously remarking, in reference to Chief Justice Marshall, “He’s made his decision–now let him enforce it”. The mass relocation became known as “The Trail of Tears”.

By the time the Civil War broke out in 1861, only scattered groups of Native Americans remained in the east. One of these was the Lumbee tribe in North Carolina. Under the racial laws which enforced the Sothern slavery system, Native Americans were classified as “free people of color”–a category which also included non-slave African-Americans. The slave-owning aristocracy considered them all to be a dangerous threat to the social order (especially in the wake of Nat Turner’s unsuccessful slave revolt), and passed a series of laws to keep them powerless. “Free people of color” were banned from voting, from serving on juries, and from possessing firearms. As a result of this legal discrimination, the Lumbees lived mostly in poverty, on small farms on the worst land outside of town.

After the Union victories at Vicksburg and Gettysburg, the war began to turn against the Confederates. In the South, local militias appeared, known as the Home Guard, consisting of discharged soldiers and men who were not suitable for service at the front. A series of defensive forts and strongpoints were planned, and the Home Guards were sent to forcibly recruit all able-bodied males who could be pressed into service to build them. And “free people of color” were specifically targeted. To escape this impressment, many Lumbee Indians, free African-Americans, and escaped slaves, as well as Union sympathizers, left town and retreated into the nearby forests and mountains. Here, they were dependent upon local supporters for food and supplies, and many of them turned to thievery to survive.

One of these bands, in Robeson County NC, was led by the Lowry family. Before the war, the Lowrys had a farm of about 2,000 acres. Some documents list them as Lumbee, others as African-American: they may have been of mixed ancestry. During the war, local Home Guards began forcibly recruiting local men to work at constructing nearby Fort Fisher, and to avoid this, most of the Lowry sons fled into the swamps.

In December 1864, members of the family stole two pigs from the plantation owned by James Barnes. Barnes led a group of Home Guards to arrest the Lowrys, but a gunfight broke out and he was killed. The Lowrys, accompanied by local supporters, now waged an open guerrilla war against the local aristocracy. In a daring attack, they broke into the county courthouse and took guns and ammunition from the armoury, then launched a series of nighttime raids against local plantations, stealing food and supplies and distributing them to other Lumbee bands hiding in the swamps. In March 1865, Home Guards raided the farmhouse of Allen Lowry, the elderly patriarch of the family, and found guns hidden there. In retaliation, the militia convened a drumhead “trial” and summarily executed Allen and his son William.

The executions sparked a private war, led by Lowry’s son Henry, that would last for the next seven years, long after the Civil War was over. The Lowry Gang, as it was known, specifically targeted the area’s wealthy white plantation owners, and over the years carried out a number of raids, robberies, assassinations, and gunfights with lawmen. To the authorities, the Gang was just a bunch of thieves and “swamp outlaws”; to many of the local people–especially Lumbee Indians and African-Americans–the Lowrys were modern-day Robin Hoods who were fighting for social justice. This reputation was enhanced when the Lowrys ambushed and killed the head of the local Ku Klux Klan. Henry Lowry became the most famous outlaw in North Carolina, with a $12,000 reward on his head, and his exploits were reported by newspapers in faraway New York and Chicago. Southern newspapers, meanwhile, depicted the Lowry Gang as “the African Ku Klux”, a terrorist group that targeted white citizens.

In February 1872 the band made its most famous robbery, attacking a depot in Lumberton and making off with a safe containing $20,000 in cash. After that, Henry Lowry disappeared, and it is still unknown what happened to him. Some have speculated that he died of a gunshot wound from a raid; others assert that he moved away to the Wild West to start a new life. Leadership of the Lowry Gang fell to his son Steve, but the raids were already slacking off. When Steve Lowry was shot by bounty hunters in 1874, the Lowry War came to an end.

The legacy of the Lowry Gang is still controversial. The Lumbee Nation has named its highest award after the Lowrys, and the History Channel has aired a documentary depicting them as heroic fighters for social justice. Others, however, consider them as just a band of outlaw thieves.

A revolver that once belonged to gang member Tom Lowry is now on display at the North Carolina Museum of History in Raleigh.

2 thoughts on “The Lowry War”