When Europeans reached North America, dense forests of Longleaf Pine covered most of the southeastern continent, stretching from Virginia all the way down into Florida. Today less than five percent of these forests remain. 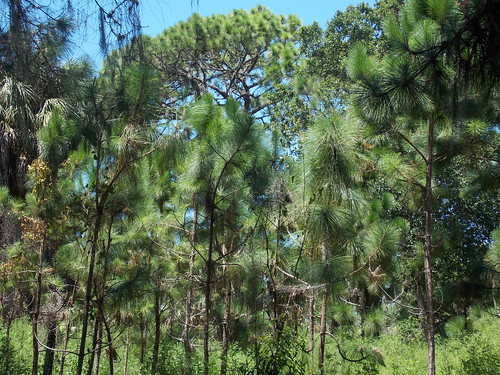 There are about 150 species of pine tree across the world, all in the single genus Pinus. They are conifers, characterized by their needle-like leaves and their reproductive seed cones. Mostly restricted to temperate and semi-tropical habitats, in the northern taiga they are replaced by their cold-adapted relatives the spruces.

In Florida, the most important species was the Longleaf Pine, Pinus palustris. As the name implies, this tree has the longest needles of any American pine, between 8 and 14 inches. Preferring open habitat with lots of sun, the tree grows slowly at first. Young seedlings appear as a mere clump of needles on the sand. During this “grass stage”, which lasts for several years, the young pines are sending out an extensive root system that will anchor the tree against storms and wind. Once the roots are ready the trunk grows straight up into the sun, to an adult size of 80 to 100 feet. Longleafs have exceptionally thick bark, which protects them from the wildfires that periodically sweep their habitat. (The fires are also necessary for the tree’s reproduction, spurring the cones to open and drop seeds, and clearing the soil of leaf litter so the seeds can reach soil to germinate.) The trees can live over 300 years.

In pre-European times, the Longleaf Pine formed extensive stands of forest in the southern US, an estimated 90 million acres running along the coastal Atlantic plains from Virginia all the way around Florida, and then up the Gulf Coast to Texas. In Florida, with its constant sunshine and sandy soil, the pine flatwood forests also extended inland and were the most common ecosystem in areas where the surface was above the water table. Stands of Longleaf Pine formed unbroken stretches of open parklike habitat, with palmetto undergrowth, that served as homes for many Florida species of plant and animal: some 900 species of plant, 100 birds and 175 reptiles are associated with pine scrubland habitat, including such now-endangered species as Gopher Tortoises and Red-Cockaded Woodpeckers.

Unfortunately, the extensive pine forests came under attack as soon as the European population began to industrialize in the 19th century. The tall straight pine trees were perfect for lumber (sold as “yellow pine”) and for the masts of sailing ships, and huge tracts were cleared by logging. In Florida, in addition to being cleared for orange groves, Longleaf Pines were cut by the turpentine industry, which became an important source of income in the state. As the Longleaf areas were logged and cleared, they were replanted with faster-growing species such as Slash Pine or Loblolly Pine, which could be harvested more often. By the 1890s, the once-extensive Longleaf forests were shrinking, and by 1920 they were virtually gone. Even in areas that were not cut or logged, programs for the prevention of wildfires allowed thick layers of needles and leaf litter to build up, preventing new pine seedlings from sprouting. Less than 3 million acres of Longleaf pinewoods still remain, scattered around in disconnected tracts–and only 12,000 acres of this are original unlogged old-growth forest.

Today, efforts are being made to restore the Longleaf habitats. In 2010, the USDA, in cooperation with the USFWS and state conservation agencies, launched the Longleaf Pine Initiative, which has spent almost $20 million on a Wildlife Habitat Incentive Program to help landowners preserve existing tracts of pineland and to expand Longleaf areas in 9 states by 5 million acres before 2025. There are still a few sizable areas of pinewoods that form the core of this effort: Uwharrie National Forest in North Carolina, Francis Marion National Forest and Sand Hills State Forest in South Carolina, and several state forests in Alabama.

In Florida there are four large protected tracts of Longleaf Pine remaining: Eglin Air Force Base, Apalachicola National Forest, Okefenokee-Osceola Forest, and De Soto National Forest. There is also the Nokuse Plantation, a privately-owned 53,000-acre preserve near Pensacola. In each of these areas, programs of replanted seedlings and controlled burns are being used to reintroduce and expand the pinelands.