The Nakajima Ki-43 “Oscar” was the standard Japanese Army fighter during the Pacific War. Although overshadowed by the more famous Zero used by the Japanese Navy, the Army’s Oscar was actually more maneuverable and shot down more Allied aircraft in total than the Zero did. 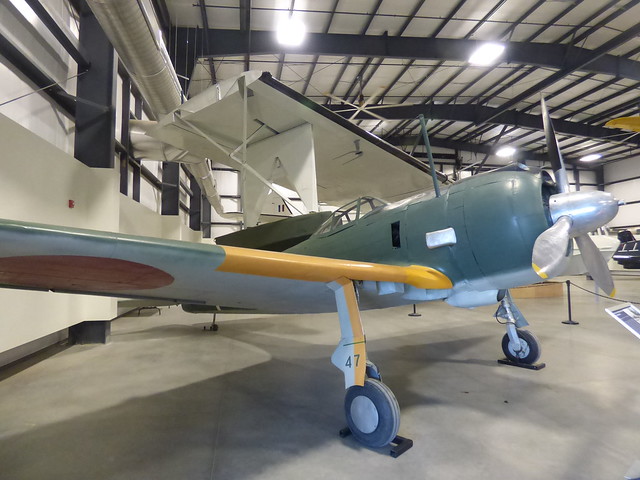 Hayabusa Oscar at the pima Air and Space Museum

In the years leading up to the Second World War, the Japanese government became dominated by militarists who sought to use a policy of conquest to build up a Japan-dominated “Co-Prosperity Sphere” in Asia. Within the military, however, the Japanese Imperial Army and Navy found that they couldn’t get along with each other. Strategically, they had entirely different ideas about Japan’s expansion and how it should be accomplished. The Army wanted to make a massive thrust up through China and into Russia to capture the untapped mineral resources in Siberia. Not coincidentally, this would involve a series of land campaigns in which the Army would play the central role. The Navy, on the other hand, favored a move into southeast Asia towards Australia, which would capture the oil and rubber areas in Indochina and the East Indies. Not coincidentally, this series of island conquests would leave the Navy as the key player. As a result, both branches simply began preparing for the kind of war it wanted to fight and viewed the other merely as a rival for resources and support. In the course of the war, the Navy therefore recruited and trained its own ground troops, while the Army would go so far as to build its own aircraft carriers; in places like New Guinea and Iwo Jima where both branches had forces, they operated independently of each other, with their own separate chains of command.

One area in which the two branches flatly disagreed was air power. In the 1930s, air power was still a new concept, unproven in combat. The Japanese Navy, under the leadership of Admiral Isoroku Yamamoto, was an early proponent, and built up a powerful force of carriers and planes as well as long-range land-based bombers. The Japanese Army, however, influenced by its experiences in the invasion of China, viewed air power as simply a tactical force whose primary role was to support troops on the ground. This was reflected in the standard Army fighter of the time, the Nakajima Ki-27 “Nate”–a lightly-armed bomber escort.

In 1939, however, the Japanese Army got a shock. A border incident at the Mongolian village of Nomonhan led to a fullscale battle with the Soviet Union, and the Japanese Nates, not designed for air superiority combat, suffered huge losses to Russian I-16 fighters. The Japanese Generals realized that they needed a new fighter. The new design was designated the Nakajima Ki-43.

By this time, most fighters around the world were being built with 6 or even 8 heavy .50-caliber machine guns. The Japanese Army, however, still wanted an aircraft built for the war in China: the Chinese did not have much of an effective air force, so the primary role of the new fighter would be tactical support rather than air superiority. Like the Nate, the Ki-43 would be armed with two 500-pound bombs for ground attack and just two .303-caliber machine guns in the cowl for air combat (it was assumed that the superior training and marksmanship of the Japanese pilot would make up for this relative lack of firepower). What the Army did want, however, was range: airfields in China were primitive and far apart, and the Japanese had also learned the lessons from the Nazi experience in the Battle of Britain, when the short range of the Messerschmitt fighter limited its ability to carry out operations over England.

So, the new fighter/bomber was, essentially, a long-range version of the Nate. The Ki-43 replaced the fixed landing gear of the Ki-27 with retractable wheels, added new internal gas tanks, and an Ha-25 radial engine with 950 horsepower. Top speed was a little over 300mph. A pair of “butterfly flaps” supplemented the ailerons and gave the plane phenomenal maneuverability, while its forgiving handling characteristics made it easy to fly.

The first combat models, the Ki-43-I, were introduced in 1941, with 40 planes in service by the time of the Pearl Harbor attack. Because one of the first Japanese Army units to receive the new fighter was the 64th Fighter Wing, known as the “Peregrine Falcons” from their insignia, the plane became known as the “Hayabusa”, the Japanese word for “falcon”. Although the new Hayabusa was the subject of much press fanfare in Japan and even had a propaganda movie and a song made about it, it took a while for intelligence services in the US to recognize it: most pilots who encountered it in China thought it was a Navy Zero. Eventually the Ki-43 received the Allied designation “Oscar”.

The Japanese Generals had, however, chosen poorly. Although its lightweight construction gave it incredible range for the time and it was the most maneuverable plane anywhere in the sky (capable of out-turning even the Zero), the Oscar had not been designed for air-to-air combat, and it was slow, unarmored, and too vulnerable to the multiple .50-calibre machine guns carried by Allied fighters, while its own twin guns were woefully insufficient. Compared to the P-40 Warhawk fighters being flown by American volunteers in China, the Ki-43 was already outclassed.

New versions followed. In late 1942 the Ki-43-II was introduced: the engine was upgraded to the supercharged 1150 horsepower Ha-115 with a three-bladed prop, the wings were slightly shortened, and one of the .30 caliber guns was replaced with a .50-caliber, or sometimes a 20mm cannon. This was followed a year later by the Ki-43-III, with two .50-cals or 20mm on a longer nose, and a more powerful engine with a top speed of 360mph. In 1944, plans were made to replace the Oscar with the new Ki-84 Frank, but American bombing made this impossible.

In all, about 6,000 Oscars were produced during the war. They were the most common Japanese Army fighter, and saw more combat (and shot down more Allied aircraft) than the Japanese Navy’s much more famous Zero. By the end of the war, a large fleet of Oscars had been assembled in Japan, where they were intended to be used in suicide attacks against the American invasion fleet. After the war, a number of captured Oscars continued to fly with the Chinese Communists until 1949.

Today, only a handful of Oscars survive. One of these is on display at the Pima Air and Space Museum in Arizona.