Area 51, near Las Vegas NV, is most famous as the focus of various conspiracy theories which assert that the US Government is secretly studying crashed flying saucers and alien bodies there. Those conspiracy theories are fanciful nonsense. But there is indeed a real government cover-up and secrecy around Area 51 which does not involve UFOs or space aliens. 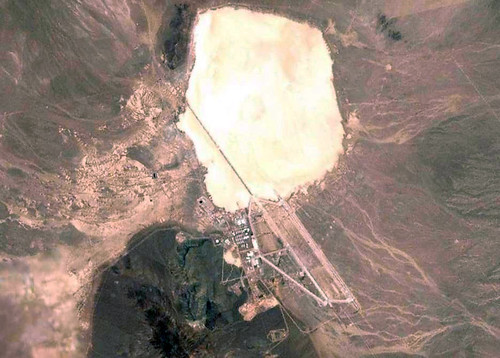 The Second World War had not even ended before the Cold War began. By 1950, the United States was focusing all its attention on the Soviet Union, in what was in effect a third world war. One immediate priority for the US was surveillance–the USSR was a closed society with sealed borders, and the intelligence community needed a way to see for itself what was happening inside.

The result was one of the most secret projects of the 1950’s. At the Lockheed Skunkworks in California, a new spy plane was designed and built for the CIA, under the code name “Project Aquatone”. Aquatone could fly at phenomenally high altitudes, over 70,000 feet–far above the ability of Soviet fighters or surface-to-air missiles to reach it–and it was fitted out with the best photographic equipment available. The new spy plane was given the designation “U-2”.

By 1955, the U-2 was ready for test flights, and the CIA began looking for a suitably remote area where it could be flown without being observed. The place they settled on was some government-owned land in the desert about 90 miles north of Las Vegas, near a dry lakebed known as Groom Lake. Atomic Energy Commission maps labeled the sector as “Area 51”. Within a short time, the CIA and the Air Force had constructed a temporary base at Area 51, for the sole purpose of testing the U-2. A 5,000-foot runway was constructed next to Groom Lake (with the dry flat lake bed itself providing additional area for emergency landings.) Three hangars were put up to house the U-2s, and a trailer park was set up for the pilots, ground crews, and development teams that would test the airplane. The entire complex was surrounded by a security fence. As a cover story, the Air Force announced that it was building a small base for “weather research”.

But even as the U-2 became operational and was moved to overseas bases in Japan and Turkey, the testing center at Area 51 ran into an awkward problem: the Atomic Energy Commission had established its nuclear testing range not far away from Las Vegas, and Groom Lake was located about 30 miles downwind. So in 1957, after testing was completed on the U-2, the base, which had always been intended as temporary, was closed down.

As it turned out, the U-2 project was also temporary. In May 1960, a Soviet SAM shot down a U-2 over the USSR. The CIA and the Air Force were frantic: their entire photo-reconnaissance ability was now in jeopardy. And so they switched the focus of their spy plane technology: rather than avoiding Soviet air defenses by flying high above them, American reconnaissance planes would now be protected by measures which reduced their visibility to Russian air-defense radars–a system that became known as “stealth”.

As a short-term measure, the CIA carried out “Project Rainbow”, in which the U-2 was fitted with a new outer skin that was designed to weaken its radar reflection. The new coating consisted of a wire grid embedded in a flexible sheet, which was then glued onto a honeycombed layer attached to the plane’s fuselage. Officially designated “Radar Absorbent Material”, it became colloquially known as “wallpaper”. To test the effectiveness of the new material, the Air Force reopened the base at Area 51 (after the above-ground nuclear testing had ended). A 60-foot tall metal pylon (known as “the pole”) was constructed, and the wallpapered U-2 was attached to the top so radars (including captured Russian radars) could be aimed at it from various directions to test the resulting reflected signals.

But the “wallpaper” was heavy and detracted from the U-2’s performance, so a replacement spy plane, designed from the ground up with stealth, was begun. It was called “Project Oxcart”. Once again, the Lockheed Skunkworks was given the task of designing the U-2’s successor. The result was the A-12, which in later versions became known as the SR-71 Blackbird. Designed for speed, altitude, and stealth (and ironically built with titanium surreptitiously obtained from the Soviet Union), it was one of the most advanced planes ever flown.

By 1962, the A-12 prototype was ready for testing, and the base at Area 51 was expanded to handle it. The existing runway was supplemented by a new 8,500-foot concrete landing strip that was soon extended another 6,000 feet out onto the Groom Lake bed. The spartan trailer park was replaced by permanent barracks for a much larger number of personnel, and three new hangars were built. The base was now over twice the size. In 1968, during the Vietnam War, the restricted airspace around Area 51 was expanded and used as a place to test-fly a captured Soviet MiG-21 fighter, in conjunction with the Foreign Technology division at Wright-Patterson Air Force Base. This secret program was known as “Project Have Doughnut”, and it began a new mission for Area 51: training a number of US pilots in air-to-air tactics against captured Soviet equipment, so they could serve as instructors in Air Force and Navy “aggressor squadrons”. To support this work, the Groom Lake base was once again expanded, and seven new hangars were constructed to house captured Russian (and later Chinese) military equipment. With the birth of the new MiG studies and the decline of aerial reconnaissance aircraft, Area 51 underwent a transition: the CIA left, and the base was completely taken over by the Air Force.

The successful of stealth on the CIA’s SR-71, meanwhile, led, in the 1970s, to an Air Force effort to use the new technology in combat aircraft. The result was a number of projects that tested various stealth designs. Because computer technology at the time was relatively crude, it turned out that the most practical method of achieving stealth was to build the plane with a large number of flat facets, like a diamond, that would each reflect radar energy away. By 1975, a test aircraft known as “Have Blue” was on the pylon at Area 51 undergoing radar testing, and was then test-flown. After some revisions, the design went into production as the F-117 stealth fighter. Just a few years after work began on the faceted-body fighter, computers became powerful enough to produce smooth-body stealth designs, which led to the testing and production of the B-2 stealth bomber, and then to the F-22 fighter and F-35 ground-attack jets.

In addition to the computer-designed surfaces, the stealth aircraft also depended on new versions of Radar-Absorbent Material. These covered the skin of the airplane and absorbed radio energy, making it harder for radars to detect. The composition of the stealth RAM remains one of the most highly-classified secrets held by the US government. And it was this super-secrecy that led to one of the darkest incidents in the history of Area 51.

During its testing of possible materials for RAM, the Air Force produced tons of waste chemicals and by-products, and disposing of it presented a serious problem: if the Russians managed to get a sample of the waste material, they would be able to analyze it and figure out what the RAM was made with, and that was a secret which, the military decided, had to be protected at all costs. So the Air Force decided that nothing at Area 51 would be allowed to leave the base, not even the waste material from testing. To dispose of it, the militaryadopted a method that was crude but effective: they dug a number of large open-air pits near the runway, piled them full of barrels of waste material, soaked it all in jet fuel, and burned it. Over a period of years in the late 80s, the weekly incinerations produced huge black clouds of oily soot that drifted across the entire base, and became jokingly known as “London Fog”.

Within a short time, people who worked on the base began exhibiting respiratory and skin infections, which they attributed to the toxic clouds produced by the incinerations. When they asked the Air Force to tell their doctors what chemicals were being burned so they could make a diagnosis and begin treatment, the Pentagon refused, saying that any such revelation might allow the Russians or Chinese to figure out what the stealth RAM coatings were made from. The Air Force also refused to allow military doctors access to the information, declaring that they did not have the necessary security clearances and had no “need to know”.

A number of civilian contractors from Area 51 then filed a lawsuit against the government, charging that the Defense Department was violating the federal Clean Air Act and Right-to-Know laws with its open-pit burning. The Air Force at first responded with its standard security procedures, simply denying that there was any US base called “Area 51”. Later, while acknowledging that there was indeed a secret testing facility at Groom Lake, the military declared to the judge that any discussion of stealth-related matters was a danger to national security, and they would not release any information on the subject. In 1995, President Bill Clinton issued an Executive Order declaring that, although US military facilities would follow EPA regulation concerning the treatment and handling of toxic materials, they were exempt from any need, under environmental or right to know laws, to release any information that would effect national security. The judge in Nevada dismissed the Area 51 workers lawsuit. Two of the affected workers had already died.

The Clinton Executive Order was in effect for one year, and had to be renewed each year by Presidential decree–and it has been, annually, through the Presidencies of George W Bush and Barrack Obama.