The Christmas Truce of 1914 was one of the most famous events to come out of the First World War. Some have called it the last gasp of the chivalric age of professional militaries and gentlemen officers, to be followed by the full horrors of modern impersonal industrial war. 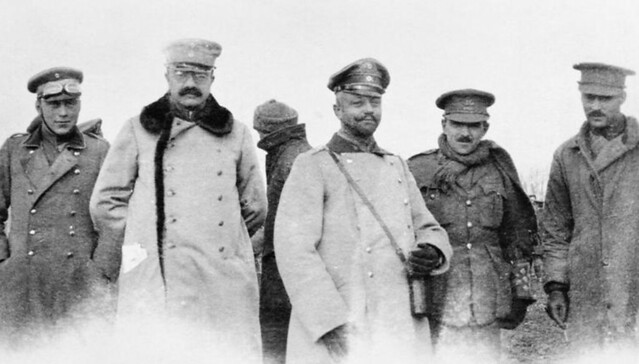 When World War One began in August 1914, most of the troops on both sides expected it to be over quickly: they would be home, it was said, “before the autumn leaves fell from the trees”. Instead, the war bogged down in a bloody stalemate, with millions of troops facing each other from deep protective trenches that ran unbroken from the Swiss border to the English Channel. By December, it seemed as though the war might never end. There had already been massive casualties, and the survivors huddled in their cold wet muddy trenches with the unburied bodies of their comrades piled up in the fields beyond.

As Christmas approached, both the Germans and the Entente made a special effort to boost the morale of their troops. The men at the front received special holiday packages containing cakes, chocolate, tobacco, and decorations. The German troops were given Tannenbaums–small Christmas trees which they decorated with candles and bits of metal.

The Truce began spontaneously and independently. As darkness fell on Christmas Eve, German troops displayed their Tannenbaums and began singing carols. In some sections of the trenches, the British troops in the opposite trenches joined in the song; there were times when both sides would sing the same carol from their trenches, each alternating in their own language. Sometimes they tossed small gifts to each other, like chocolate bars or cigarettes.

As Christmas morning dawned, these exchanges became bolder. In one sector, English-speaking Germans called over to the British that if they didn’t shoot, neither would the Germans. “We good,” they declared, “We no shoot”. In another sector, an Irish private simply climbed out of his trench and walked over to the Germans, and was then joined by his comrades. In still other sectors, both sides called out to each other to arrange a ceasefire to allow them to bury all the bodies in No Man’s Land and to search for wounded survivors. And once both sides were wandering around unarmed in No Man’s Land, fraternization was virtually inevitable. Troops began to talk to each other, show photographs of family back home, and exchange caps or buttons.

There is a common belief that the Christmas Truce took place along the entire trenchline and that it involved nearly all the troops. That is not so. The French and Belgian soldiers, who had seen their country invaded and occupied and many civilians and family members killed, already carried a bitter level of hatred and resentment at the Germans. There were only a few incidents of fraternization between them, though it is known that in one area a group of Belgian soldiers approached a unit of Germans to ask them to deliver letters written for their families inside German-occupied territory. There were also some incidents of an unofficial Truce on the eastern front, with German and Russian troops mingling and exchanging gifts, but not to the extent seen on the western front.

For the most part, the Truce took place in the British sector, which was centered on a patch of woods near the Dutch town of Ploegsteert (known to the British as “Plugstreet”). The British Expeditionary Force army was at this time still made up of professional regulars, for whom “war” was just a job–they had no personal gripe with the Germans and, stuck in their muddy trenches far from home, probably thought that they had much in common with their opposing troops. And so, in various places along the British front, the war came to a temporary holiday end.

We know about some specific events because they were recorded in the soldiers’ personal diaries and journals, and also in the letters that troops from both sides sent home (some of which were then published in local newspapers). Captain Sir Edward Hulse of the Scots Guards Regiment wrote that an English-speaking German officer left his trench and approached him, explaining that he used to live in Suffolk. “Scots and Huns were fraternizing in the most genuine possible manner,” Hulse wrote. “Every sort of souvenir was exchanged, addresses given and received, photos of families shown, etc.”

Lt. M.S. Richardson told his family, “The situation was so absurd, that another officer of ours and myself went out, and met seven of their officers. One of them presented me with the packet of cigarettes I sent you, and we gave them a plum pudding, and then we shook hands with them, and saluted each other.” Private Henry Williamson wrote to his mother, “In my mouth is a pipe presented by the Princess Mary. In the pipe is German tobacco. Ha ha, you say, from a prisoner or found in a captured trench, Oh dear, no! From a German soldier. Yes a live German soldier from his own trench.  Yesterday the British and Germans met and shook hands in the ground between the trenches, and exchanged souvenirs, and shook hands. Yes, all day Christmas day, and as I write. Marvelous, isn’t it?”

Cpl. Eric Rowden noted in his diary, “I went out and found a German who spoke English a little, and we exchanged buttons and cigarettes. And I had two or three cigars given me, and we laughed and joked together, having forgotten war altogether.” Sergeant Major George Beck wrote, “A German band went along their trenches playing ‘Home Sweet Home’ and ‘God Save the King’, which sounded grand and made everyone think of home.”

On the German side, trooper Richard Schirrmann, at the Vosges mountains, wrote, “When the Christmas bells sounded … something fantastically unmilitary occurred. German and French troops spontaneously made peace and ceased hostilities; they visited each other through disused trench tunnels, and exchanged wine, cognac and cigarettes for Westphalian black bread, biscuits and ham. This suited them so well that they remained good friends even after Christmas was over.” Private Kurt Zehmisch of the 134th Saxon Regiment wrote in his diary, “Not a shot was fired. . . . The English brought a soccer ball from the trenches, and pretty soon a lively game ensued. How marvellously wonderful, yet how strange it was. The English officers felt the same way about it.  Thus Christmas, the celebration of Love, managed to bring mortal enemies together as friends for a time.” (The idea of a soccer match between the opposing troops is now a central part of the Christmas Truce mythology, but in reality there was no big organized match; there were simply a number of pick-up “kick-arounds”.)

In one place, a German soldier who had worked as a juggler and acrobat performed a full show out in No Man’s Land. In another sector, British and Germans who had been barbers in civilian life now gave out free haircuts. In all, about 30,000 British and 70,000 German troops from a number of different sectors were involved in the Truce.

But even in the British sector, the Truce was not universal. At the French village of Festubert, when the Germans raised lighted lanterns as a signal for a ceasefire, the Hertfordshire Regiment, of the elite Guards Brigade, replied by firing on them. That morning a sniper duel took place which killed two English and one German. In all, some 250 deaths were reported along the Western Front on Christmas Day 1914 (though this was far less than the average of over 1,000 a day, and some of them were men who had been wounded previously).

Within hours, word of the impromptu ceasefires had reached British Army headquarters in Paris, and commander in chief General Sir John French was furious. The initial enthusiasm for the war had already eroded among the English public, and an anti-war movement had already appeared. In Russia, there were reports of insubordination and mutinies against the war (which would soon lead to the Russian Revolution). The British and French Governments were greatly afraid that the war effort would be hampered by a peace movement. Orders flew to every frontline unit: “No communication of any sort is to be held with the enemy, nor is he to be allowed to approach our trenches under penalty of fire being opened.” When letters and photos from the Truce were printed in the London newspapers, the military issued a communique noting that it was “treason” to fraternize with the enemy, and declared that the “truce” had been small, sporadic, and had “degenerated into shooting”. The Kaiser’s Government also condemned the Truce. When German newspapers attempted to print reports from the trenches, they were censored.

The next year, in December 1915, both sides took steps to insure that there would be no repeat of the Christmas Truce. Strict orders appeared threatening “severe” punishment for anyone fraternizing with the enemy.The British ordered a number of raids and attacks on the German trenches, while the French dropped an artillery barrage between the opposing lines. The slaughter would continue unabated for the next three years.