Although it became one of the most famous aircraft of the Second World War, the Messerchmitt Bf-109 (also referred to as the Me-109) was almost not built at all. 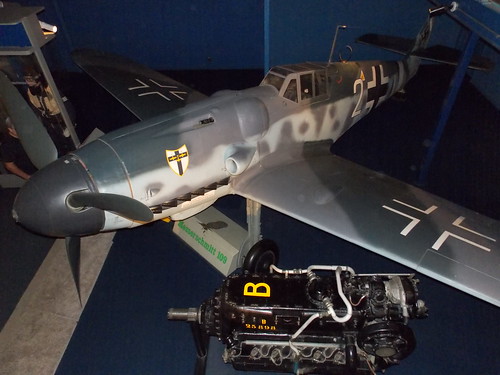 In 1933, the new Hitler regime was already planning for a war in Europe, and the secretly-rebuilding Luftwaffe was already seeking new high-performance aircraft–in violation of the Versailles Treaty. The Bayerische Flugzeug Werke (BFW), run by Willy Messerschmitt, was anxious to get in on the action, but Messerschmitt didn’t get along with the Nazi official in charge of procurement, Erhard Milch, and was blocked from bidding on military contracts. Desperate to keep the company financially afloat, BFW accepted an order to build cargo craft for Romania. This irked the hyper-nationalist Nazis, and when Messerschmitt complained that he had no choice but to accept foreign contracts unless he was allowed to bid on German orders, Herman Goering intervened and Milch relented.

As it happened, the Air Ministry had just issued a set of requirements for a modern mono-wing all-metal fighter with two machine guns, to use the new V-12 engine being secretly developed by Daimler and Jumo. (To hide the project from the Allies, the Germans designated it as a “courier aircraft”.) Messerschmitt’s proposal was designated the Bf-109. The first prototype was tested in September 1935, with two .30-caliber machine guns in the nose. Because the Daimler V-12 was not ready yet, the prototype flew with the smaller Rolls-Royce Kestrel engine from Britain. In 1936, the British began work on the Hurricane and Spitfire fighters, which would carry at least four machine guns in the wings. The Bf-109A had been designed with a thin wing which had no room for guns, so to keep up with the British a third machine gun was added to the Messerschmitt, firing through the propeller hub, and in later prototypes this was upgraded to a 20mm cannon. The new version was dubbed the Bf-109B (“Bertha”). In November 1937 a modified 109B set a new speed record of 379.38mph.

In April 1937, the first batch of production Messerschmitts were sent to Spain, where Germany was backing the regime of Francisco Franco in the Civil War. At first, biplane pilots found the new monoplane difficult to fly. The Bf-109’s strong engine torque, combined with the narrow landing gear, made takeoffs and landings difficult, and several pilots died in wrecks. But once this transition was made, the new fighters proved themselves to be superior to the Soviet-made Polikarpov I-16’s flown by the Spanish Republicans. The Messerschmitt’s first air combat victories came on July 8, when two Bf-109’s shot down two Tupolev bombers. 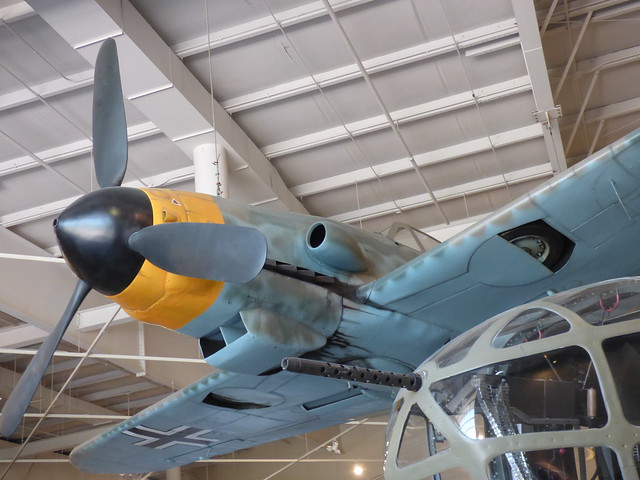 Messerschmitt Bf-109G on display at the Museum of the Mighty Eighth Air Force, Savannah GA

In the fighting that followed over the next two years, Messerschmitt ace Werner Molders developed new tactics that took advantage of the plane’s speed and maneuverability. At this time, most fighter forces were using a flight formation called a “vic”, which was a V-shaped pattern of three aircraft. The theory was that the lead plane would search for and shoot down the enemy while the two wingmen would protect the leader. In reality, however, the vic formation was difficult to maintain and required a lot of attention, which made the whole flight vulnerable. Molder instead organized his formations into two pairs, with each wingman covering his partner and the flight set into a loose formation he called a “finger four”. Molders would go on to score 115 air victories in Spain, France, and England before being killed in a transport crash in 1941.

Messerschmitt, meanwhile, was also learning the lessons from the Spanish Civil War. The 109B model was followed in quick succession by the 109C (“Clara”) and the 109D (“Dora”), each with better armament and more powerful engines.

By 1939, the Messerschmitt was undergoing more radical improvements. Daimler had a new fuel-injected V-12 DB601 engine, producing 1,050 horsepower, and this was fitted to the 109’s airframe to push the speed to 350mph. The bigger engine required additional radiators, and these were placed in new redesigned thicker wings–which were also adapted to hold two 20mm cannons. The plane also got a name change, as the “Bayerische Flugzeug Werke” was renamed “Messerschmitt AG”. The new version was designated the Me-109E “Emil”. It began entering service in 1939. Almost 1,000 of them were produced, with a number being sold to Switzerland and Yugoslavia. Three were sent to Japan for testing, but the Japanese ultimately decided to go with their own Zero and Oscar designs instead.

When World War II broke out, the Emil was Germany’s frontline fighter. In Poland, it quickly cleared the skies of obsolete Polish PZ fighters. In France, it proved itself more than a match for the French MS.406 and the British Hurricane. And by August 1940 it was poised to take on England’s best fighter, the Spitfire.

On paper, the Messerschmitt and the Spitfire were a pretty even match, with each having both advantages and disadvantages over the other. But in the end the Me-109E was severely crippled by its limited fuel supply and its short range. Flying across the English Channel from bases in France and tied to the slow bombers they were escorting, the Emils had only 10-15 minutes to engage the British Spitfires before they ran low on fuel and had to turn and fly for home. Many Messerschmitt pilots waited too long, ran out of gas on the way back, and had to ditch in the Channel.

Even as the Germans were losing the Battle of Britain, however, Messerschmitt was working on a new version. The Bf-109’s short range, he decided, made it more suited for the role of defensive fighter, and the next version, the Me-109F “Friedrich”, was optimized for that task. The engine was a larger 1200 horsepower, the airframe was streamlined for more speed, and the armament was reduced to two .30-cal machine guns in the cowling and one 20mm cannon in the propeller hub. Although the pilots were unhappy with the reduced armament, the Me-109F regained the parity that the Emil had lost to the latest-model Spitfire, the Mk V. In North Africa, “Trop” versions of the Friedrich, with filters and screens to protect against sand, were fitted with bomb racks and used for ground attack.

In the summer of 1942, the best variant of the Messerschmitt was introduced, the Me-109G “Gustav”. The 1475-horsepower DB 605A engine could drive it at almost 390mph, and a methanol injector was added which gave a temporary boost of power over 420mph. The two .30-cal machine guns were replaced by .50-cals, giving it greater punch. In 1943 there were 6,500 109G’s produced, followed by 14,000 in 1944. To help with production, the Messerschmitt was also produced by the Fieseler company under license. Although the Gustav was outclassed by later Allied fighters like the Spitfire Mk XIV, the P-51D, and the Yak-9, it remained in production till the end of the war. Some 109G’s were fitted with unguided 210mm rockets to attack Allied bombers.

In 1945, a new Me-109K “Konrad” version was fitted with two 20mm cannons in the cowling and one 30mm cannon in the propeller hub, but by this time Germany was already near defeat and few of them were built.

In total, the Nazis produced over 33,000 Messerschmitts in various models, making it the second most-produced airplane in history (behind the Soviet Ilyushin-2). Me-109’s shot down more aircraft than any other fighter, and most of the top aces of the war, some with more than 300 air victories, flew Messerschmitts.

After Germany’s surrender in 1945, the Messerschmitt flew on for a few decades. License-built versions of the Konrad were produced in Spain and in Czechoslovakia in the 1950’s and flew until 1967. (When the classic movie “The Battle of Britain” was filmed in 1969, it was Spanish-made Messerschmitts that were used by the production crew as stand-ins for Me-109E’s.) Around two dozen of the Czech Messerschmitts made their way to Israel in 1948, where they flew for a few years before being replaced by British Spitfires.

In July 1944, a Frenchman named Rene Darbois climbed into his German Bf-109G fighter on his first combat mission–and promptly flew to Italy and landed at an Allied airfield to defect, claiming that the Nazis had forced him to fly for the Luftwaffe. His plane was sent to the US for evaluation, and was donated to the Smithsonian in 1948. It remains on display.

One thought on “Icons of Aviation History: Messerschmitt Bf-109”