“They couldn’t hit an elephant at this distance.” The last words of Union General John Sedgwick, at the Battle of Spotsylvania. 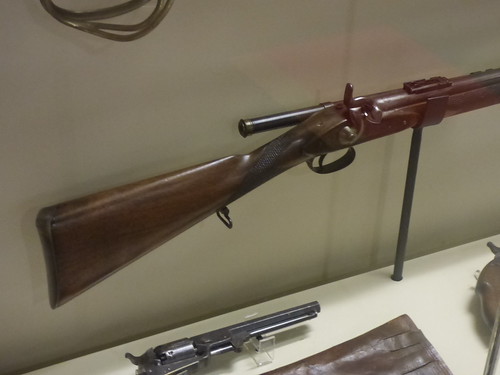 Whitworth sniper rifle, on display at the Tennessee State Museum in Nashville

When the American Civil War broke out in 1861, military firearms were undergoing a revolution. Previously, most men in uniform were issued smoothbore muzzle-loading muskets, which were loaded by pouring gunpowder down the mouth of the barrel and then ramming a round lead ball on top of it. It took about twenty seconds to load and fire a single shot, and the smoothbores were notoriously inaccurate beyond 75-100 yards. But by the time of the First Battle of Manassas, both the Federals and the Confederates were equipped with rifled muskets. These had grooved rifling inside the barrel, and fired conical lead projectiles known as “Minnie bullets”. The rifling and the conical shape imparted a spin to the bullet as it left the barrel, giving it pretty fair accuracy out to a few hundred yards. But these rifled muskets still took a long time to load, and were still most effective when fired in mass volleys by long ranks of troops.

As the exhausted troops from both sides limped away from the Manassas battlefield, they realized that this war would be neither short nor easy. It was then that Hiram Berdan, a New York inventor and champion amateur marksman, made a proposal to the US War Department that he be allowed to raise and train a special unit of sharpshooters, equipped with the very best in firearms technology, to serve as scouts, skirmishers, and snipers. He was allowed to pick the best shots in the entire Union Army, selecting volunteers from as far away as Wisconsin and establishing a training camp in New Jersey. (President Lincoln, himself a skilled marksman, visited the camp and talked with the recruits.) The requirements were stringent: any volunteer recruit had to put ten consecutive shots on a ten-inch target at two hundred yards to qualify. Two regiments were formed, christened the 1st and 2nd United States Sharpshooters. They wore distinctive green uniforms. Unlike other Army units, who fought shoulder-to-shoulder in long lines, the Sharpshooters were trained to conceal themselves in trees, behind logs, in grass, or between rocks, in places that gave them a long-distance overview of the Confederate lines. Their particular targets were enemy officers and artillerymen, but anyone on the Rebel line who poked his head into view was at risk.

At first, the Army supplied the units with new five-shot Colt rifles, which used a revolving chamber similar to that of a pistol. But many of the marksmen weren’t satisfied with the Colt’s accuracy and preferred to use their own private weapons, particularly the .50-caliber Pennsylvania Long Rifle, which could hit a squirrel at 300 yards. After a time, the War Department began issuing standard Springfield rifled muskets, but these were useless to the snipers; they wanted the newest Sharps rifles instead. The Sharps was a breechloader: to fire the rifle, a lever in the trigger guard was used to lower a metal breech block, and a paper cartridge containing powder and a conical .52-caliber bullet was inserted into the firing chamber. Closing the lever lifted the breech block into place, which sliced the back of the paper cartridge open. A percussion cap was placed on a nipple behind the barrel; when the gun’s hammer struck the cap, it ignited a flame which went inside and set off the gunpowder charge, firing the bullet. With its long barrel and rifling, the Sharps was accurate out to over 600 yards. Most Sharps rifles were issued with open iron sights, with the rear sight adjustable for range. But a few were fitted with 14-inch long telescopic sights, fitted onto the left side of the stock to avoid interfering with the breech block. In the hands of a good shot, the Sharps was a lethal weapon. The War Department, however, decided that not only were the breechloaders too expensive, but their high rate of fire would only encourage the sharpshooters to waste ammunition. They denied the request, prompting Berdan to go over their heads directly to President Lincoln himself. After watching a demonstration by Berdan of the Sharps’ range and accuracy, Lincoln personally ordered that the units be equipped with the rifles.

The Confederates, meanwhile, were training sharpshooters of their own. The South did not have the manufacturing capacity that the North did, and throughout the war the Confederates found it difficult to keep their troops equipped. As a result, many Rebel sharpshooters were using their own private hunting or sporting guns. Some of these extra-long rifles weighed as much as thirty pounds and had to be supported by a specially-made forked gunrest (or a substitute such as a rock or tree branch.) The Confederates were also able to produce their own copies of the Sharps rifle in factories in Virginia (known as “Richmond Sharps”), which went to a number of sniping units.

But the weapon that was most favored by the Confederates, and the best sniper rifle of the war, was the British-made Whitworth. Designed in 1850, the Whitworth was a unique solution to a problem that plagued all rifled guns of the time: as the bullet went down the barrel, the rifling grooves cut into the lead, imparting its spin but also measurably slowing the bullet down and reducing its range. Whitworth therefore designed his rifle with a barrel that was hexagonal in cross section–then designed his own special .45-caliber bullet that was also hexagonal and nestled snugly inside the barrel. This ingenious arrangement allowed him to add tighter rifling of one full turn every twenty inches, giving the bullet a greater spin than other barrels of the same length, and at greater speed. The Whitworth rifle was unmatched by any other gun in the world for accuracy and range. With iron sights it was accurate to at least 800 yards; with telescopic sights it was deadly at ranges of over a mile.

But the Whitworth also had a serious disadvantage–it was a muzzle-loader, and each shot had to be laboriously rammed down the barrel. The British Army decided not to adopt it, and this allowed the Whitworth Company to sell a number of the rifles to the Confederates, smuggling them in past the Union Navy’s blockade. The rifles were so valuable that they were only given to the very best of the Southern marksmen.

On both sides, the sharpshooters were elite units; they were excused from all the camp work that the line troops had to do, and spent their off-duty time target practicing. And in combat they quickly became the most hated men on the Civil War battlefield. The favored targets for the snipers were the artillery crews. Many times, an entire gun battery would be silenced because nobody could stand up to load a cannon without immediately attracting a lead bullet to the head. Officers on horseback were vulnerable even in rear areas. In set-piece sieges such as Petersburg, even the ordinary frontline troops were targets for enemy snipers, and both sides took to digging protective trenches for themselves. At the Battle of Fort Stevens near Washington DC, President Lincoln had come in person to inspect the fortifications, and came under fire from Confederate snipers. He quickly retreated back to the White House.

The sharpshooters were also the most effective method of dealing with enemy sharpshooters. There were many accounts of snipers on both sides who sat patiently in their concealed spots, often for hours, waiting for the telltale puff of smoke that would reveal an opposing marksman and make him a target.

Some snipers became celebrated for their exploits. On the Union side was “California Joe” Head. According to the legend, Private Head had gone to California during the 1848 Gold Rush and struck it rich, then returned to New York, lied about his age to enlist in the 1st Sharpshooters (he was 52), and carried a Sharps rifle that he had bought himself. In one instance, during the fighting outside Yorktown, Head and a handful of other sharpshooters pinned down an entire company of Confederate cannoneers: by nightfall only 12 of the artillerymen remained un-wounded.

On the Confederate side, there was “Old Jack” Hinson, a 57-year old farmer in Tennessee. He had opposed secession and had avoided involvement in the war until, after the capture of Fort Donelson and the surrender of Nashville, Union soldiers found two of his sons in the woods with hunting rifles and, suspecting them of being guerrillas, executed them both, beheaded them, and stuck the decapitated heads above the gateway to Hinson’s farm as a warning to others. From that day on, Hinson waged a one-man war against the Yankees. His favorite tactic was to build a blind on the banks of the Cumberland or Tennessee River, like a duck hunter, and wait for a steamboat to pass by carrying troops or supplies. Any time a Union army or navy officer in uniform would appear on deck, Hinson would pick him off with one shot from his custom-made .50-caliber Pennsylvania Long Rifle, then disappear from the pursuing troops. He is estimated to have killed or wounded somewhere between 80 and 100 Federals.

The most famous sniper shot of the Civil War, however, took place in May 1864, at Spotsylvania Court House. Union Major-General John Sedgwick was watching his troops move some cannon into place for the impending battle. A number of Confederate sharpshooters were also watching, at distances up to 1,000 yards, and soon the distinctive whistle of the hexagonal bullets from Whitworth rifles was heard. With each shot, all the Federal cannoneers dropped to the ground, prompting Sedgwick to chastize them, declaring, “I am ashamed of you. They couldn’t hit an elephant at this distance.” A moment later, a bullet struck the General in the face below the left eye, and he crumpled to the ground. He was the highest-ranking Union officer to be killed in action during the war.