In 1961, at the height of the Cold War, an 8-year old girl wrote a letter to President Kennedy, asking him to help protect Santa Claus from nuclear bombs. 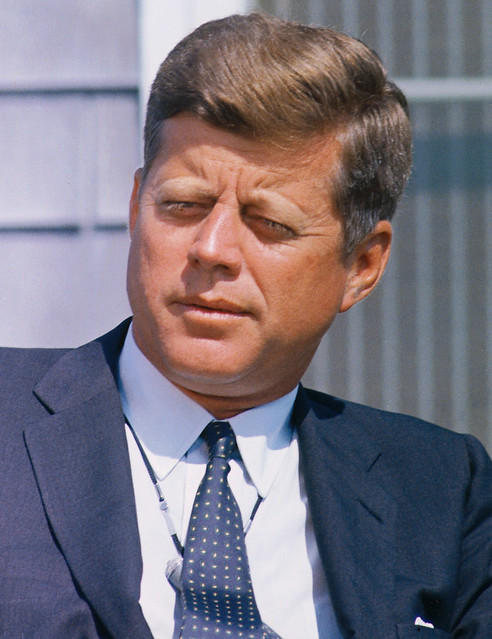 By the mid-1950s, it was apparent that the United States and Soviet Union were locked in a nuclear arms race that showed no sign of slowing down. The Eisenhower Administration was facing political pressure from grassroots citizens groups who were opposed to atomic testing, and this increased when an American nuclear test in the Pacific showered a Japanese fishing boat with radioactive fallout, provoking an international outcry.

In an effort to try to keep the arms race from spiralling out of control, the US and USSR began diplomatic talks towards an agreement that would end the testing of nuclear weapons in the atmosphere or above-ground. An agreement was reached in principle, but it fell apart over the question of verification. The Americans, who were distrustful of the Russians, wanted on-site inspectors at the nuclear test sites to prevent any cheating; the Soviets, equally distrustful of the Americans, refused to allow any foreigners into their territory. The treaty talks fell into a stalemate. In May 1960, after an American U-2 spy plane was shot down over the USSR, the Russians protested by withdrawing from the test ban treaty negotiations completely.

In 1961, the Kennedy Administration replaced Eisenhower in office, but the Cold War continued to get hotter. Conflicts arose over West Berlin, Cuba, and Laos.

During the deepest days of the Cold War, eight-year old Michelle Rochon, who lived in Marine City, Michigan, heard her parents talking about “Russia” and “Castro”. But what really caught young Michelle’s attention was when one of her parents mentioned “atomic bombs” being tested at the “North Pole”. Michelle didn’t really know what an “atomic bomb” was, but she knew it wasn’t good, and if somebody was putting them at the North Pole where Santa Claus lived, that was a very serious matter. So Michelle announced to her parents that she was going to send a letter to the most important person she could think of, President Kennedy. On a sheet of paper she carefully wrote:

“Please stop the Russians from bombing the North Pole because they will kill Santa Claus.

“I am 8 years old. I am in the third grade at Holy Cross School.

The White House sent out a press release with a photo of President Kennedy reading the letter. The story was picked up by the wire services, and soon young Michelle was getting phone calls from reporters all across the country. But her biggest thrill came when she received a letter in the mail, on official White House letterhead. It read:

“I was glad to get your letter about trying to stop the Russians from bombing the North Pole and risking the life of Santa Claus.

“However, you must not worry about Santa Claus. I talked with him yesterday and he is fine. He will be making his rounds again this Christmas.

Michelle was happy: if the President said Santa was OK, then everything must be alright.

Two days after Kennedy’s reassuring letter was mailed, however, the USSR test-dropped the 50-megaton “Tsar Bomba” near the Arctic Circle. Although impractical as an actual weapon, the Tsar Bomba was (and still remains) the largest nuclear explosion ever carried out, and was intended more as a propaganda show of strength.

In October 1962, the Soviets upped the ante in the arms race by attempting to secretly deploy intermediate-range nuclear missiles on Cuba, just 90 miles away from the United States. For several weeks the two superpowers stood eyeball to eyeball and the world tottered on the brink of a full-scale nuclear war.

The Cuban Missile Crisis scared the hell out of both sides: they had each peered into the atomic abyss, and neither of them liked what they saw. By June 1963 the negotiations for a ban on atmospheric testing had been resumed. The United States was now confident of its ability to monitor Soviet activities through spy satellites, and relaxed its demand for on-site inspection. With that concession the agreement was quickly made. The Limited Nuclear Test Ban Treaty was signed in Moscow in August 1963, by the US, USSR, and UK. France and China were also invited to sign, but they both refused. The treaty allowed underground nuclear tests to continue, but outlawed above-ground explosions.

In 1996, the UN General Assembly adopted the Comprehensive Nuclear Test Ban Treaty, which outlawed all nuclear test explosions of any sort. Over 180 nations have since signed on, but the treaty has not yet gone into effect. The United States signed the treaty, but the Senate has so far refused to ratify it. Other nuclear armed nations—China, Israel, India, Pakistan, and North Korea—have also not yet ratified.