The MiG-29 was the last of the Soviet-era fighters to be introduced during the Cold War. With a series of modifications and upgrades, it is still serving across the world as a frontline fighter. 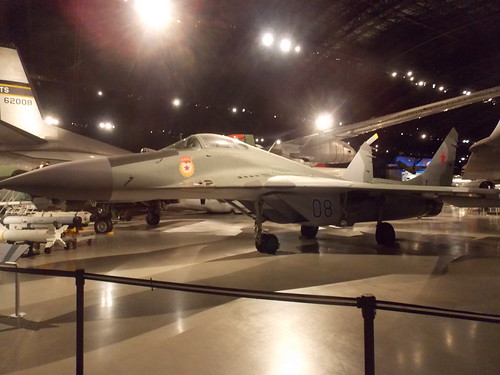 In many ways the history of the Soviet MiG-29 parallels that of the American F-16.

By 1969, the United States was looking for a next-generation fighter to replace the highly successful F-4 Phantom II. The Air Force wanted a multi-role fighter that could be used for ground attack as well as air superiority combat. The selected design was known as the F-15. As soon as the Soviets became aware of the American program, they launched their own effort to keep up. The new next-gen Soviet fighter was designated the Sukhoi Su-27.

But a short time later it became apparent to the Air Force that the technology was not yet suitable for a multi-role fighter with all of the capabilities that they wanted. So the “Experimental Fighter” project was in effect split into two–the F-15 would become a “heavy” attack fighter with a secondary air-to-air role, and the air superiority mission would go to a second “light” fighter, designated the F-16. The “light” fighter would be smaller and more agile than the F-15.

The Soviets, meanwhile, had independently reached the same conclusion, and decided upon a new smaller fighter that would handle the air defense task. It was designated the MiG-29. Early design concepts resembled the MiG-25 interceptor, but the boxy slab-sided look soon gave way to a sleeker contoured body with elegant lines. The Soviets realized that they were behind the US in fighter technology, and the new jet would be an all-out effort to catch up.

The MiG-29 was indeed a quantum leap over its Soviet predecessors. Although the airframe was mostly aluminum/lithium alloy, it also utilized some composites. Powered by two Klimov RD-33 turbojet engines, the MiG could move at Mach 2.2 and climb to over 55,000 feet. It was armed with the AA-11 Archer heat-seeking missile, which could be aimed off to the side through a sensor in the pilot’s helmet even if the MiG’s nose was not pointed at the target. The MiG could also carry the AA-10 Alamo-B long-range heat-seeking missile as well as the long-range AA-10 Alamo-A semi-active radar-guided missile. With its high thrust-to-weight ratio, automatic flaps and leading-edge root extensions, and its easy handling characteristics, the MiG was highly maneuverable. Because the Soviet Air Force depended on Ground-Controlled Intercept with radar operators on the ground directing the pilots to their targets, the cockpit avionics were not as advanced as those in the F-15 and F-16, though the MiG-29 did have a Heads-Up Display (HUD). The fighter also came with a new ejection seat which allowed pilots to bail out at altitudes all the way down to ground level, and a set of covers on the engine intakes which allowed it to operate from rough grass airfields.

The MiG’s biggest difficulty was its relatively short range–only a little over 900 miles. The original model also did not have any built-in chaff and flare dispensers to defend against missiles, but these were added later after a number of aircraft were shot down in Afghanistan by mujahadeen guerrillas equipped with American shoulder-fired Stingers.

NATO analysts first learned of the MiG-29 in 1977, when the prototypes were photographed by satellites. They were given the designation “Fulcrum”. Unsure about the plane’s capabilities, the US assumed that the new jet was equal to the American F-16, and immediately began new efforts to stay ahead in the Cold War arms race, secretly beginning the “stealth” program that would go on to produce the F-22 Raptor.

The first frontline Soviet squadrons were equipped with production MiG-29As in June 1983, but the jet was not displayed publicly until 1986, when it participated in several Western air shows. Over the years, continuous upgrades were added, including increased range, better avionics, air-to-ground capability, electronic missile-jamming countermeasures, and new active-radar “fire and forget” air-to-air missiles; design work was also begun on a naval carrier-based version with folding wings and a more robust construction. The MiG-29 was widely exported, with versions going to Soviet client states as well as non-aligned nations like India and Yugoslavia.

In 1991, just as the MiG-29M model was ready to go into production, the Soviet Union collapsed, first transforming itself into a “Commonwealth of Independent States” and then breaking up into a myriad of separate sovereign nations. The United States was finally able to get a good look at its potential Cold War adversary, as the newly-united Germany absorbed the former East German MiG-29s into its air force. Some of these were re-fitted with NATO avionics, and a few were sent to the US and UK for evaluation and “adversary training”. For a time the new Russian government allowed its own MiG-29 fleet to languish, putting its limited resources into upgrading the Su-27 instead (including a new “stealth” version), but after a few years new versions of the MiG began appearing again, including an improved model known as the MiG-35. Today the MiG-29 remains one of the most widely-distributed military planes in the world, and new upgrades will insure that it stays in service for several more decades.

In 1997, after the end of the Cold War, the US reached an agreement with the nation of Moldova to buy 21 of its MiG-29s. Moldavia had found itself in possession of the jets when the USSR dissolved, but since it had no trained fighter pilots it put them up for sale, and the US bought them to prevent them from going to Iran or North Korea. The MiGs were disassembled, crated, and flown to the Air Force’s National Air and Space Intelligence Center at Wright-Patterson Air Force Base in Ohio, where they were reassembled, examined, and the few that were still airworthy were used for combat training.

One of the Moldovan jets, an early-model MiG-29A, is now on display in the Cold War Gallery at the US Air Force Museum in Dayton.

One thought on “Icons of Aviation History: MiG-29”