The Widows are some of the most-feared spiders on the planet, and Florida has three different species. But the dangerous reputation of these spiders is greatly exaggerated: in reality they are shy animals that try their best to avoid humans. 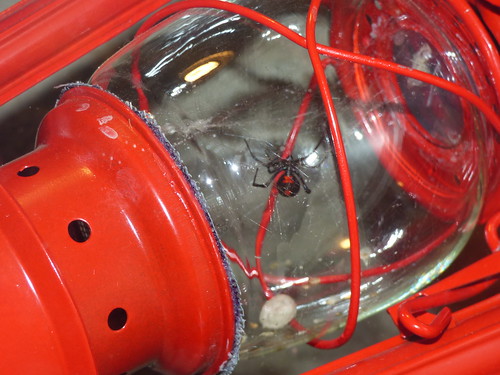 The widow spiders are members of the Theradiid family of “comb-footed spiders”, which is a widespread group found in tropical and temperate climates around the world. The females have large bulbous abdomens, while the males are much smaller and thinner.

The widows, in the genus Latrodectus, are distinguished by some technical details. There are around 30 recognized species of widow spider, found across the world. In Africa, they are known as “button spiders”. In Australia, they are known as “redbacks”. In Europe, South America, Asia, and North America, they are known as “widows”. Most widows are bright glossy black with distinctive red or orange hourglass-shaped markings on the underside of their abdomen; a few species are brownish in color, and some have large red splotches on their backs. Juveniles have lots of red and white stripes and splotches; the adult males, which are much smaller than adult females, usually retain their juvenile markings. Adult females are about the size of a marble.

Widow webs are made in rock piles, hollow stumps, or any other out-of-the-way place. They have no regular structure, but are just a random tangle of threads. The spider usually sits in the center of the web, hanging upside down to display the prominent red hourglass marking as a warning to birds and other predators. The silk is enormously strong, as tough as steel wire. Most of the web is not sticky, but simply entangles insects or other prey that stumbles into it, but the strong web, combined with the spider’s potent venom, allows the widows to capture and eat prey as large as small lizards.

The taxonomy of the widow group has been controversial for decades, with the “splitters” wanting to separate them into different species based on some technical differences, and the “lumpers” considering these as minor variations and wanting to place all the spiders into just one or two species. At times this controversy has gotten heated; in one memorable exchange, a taxonomist dispensed with the normal scientific decorum to refer to one of his fellows as “an ignoramus”.

The name “widow” comes from the legend that the female always eats the male after mating; in reality this is only true in some species, particularly the Redbacks. In the harsh Australian Outback, eating the male gives the female extra energy and nutrition to produce her eggs.

In most species the male does an elaborate “dance” upon approaching the much larger female, plucking the fibers of her web like guitar strings to signal that he is there to mate. Male spiders have a pair of appendages near their mouth called pedipalps, which they charge with sperm. Once the female accepts the male’s love signals, he approaches and climbs onto her belly, carefully inserting his pedipalps into her abdomen to fertilize her. Once the deed is done, he disengages, leaves, and recharges his pedipalps to try again with another female. Like most spiders, he dies shortly after the mating season is over.

The female then spins an eggsac on her web, about the size and shape of a chick pea, into which she lays several hundred eggs. These hatch in a few weeks to produce a horde of tiny spiderlings, each about the size of a pinhead. Although the younglings will eat small insects such as aphids or fruit flies, they are also cannibalistic and will eat each other–and they in turn are also eaten by a horde of small predators. Of the hundreds of hatchlings, only two or three will survive to adulthood. An adult female takes about a dozen weeks to reach breeding size and then lives several years.

Since their webs are not sticky, the widow spiders have unusually potent venom, which acts as a neurotoxin to paralyze their prey before it can escape. Drop for drop, black widow venom is about 15 times more powerful than a rattlesnake, though of course the spider is much smaller and can’t produce as much of it. The danger to humans, though, has been greatly exaggerated. In the US, about 2,000 people are bitten each year by widows (usually the Western Black Widow, Latrodectus hesperus). Of this number, only a couple dozen actually suffer severe symptoms (including excessive sweating, vomiting, and painful muscle cramps). Only a small number of people have actually died from widow bites, and these tend to be young children or the elderly. Today there is an antivenom available.

I have kept and bred dozens of Black Widows, Brown Widows and Red Widows, and have always found them to be shy and nonaggressive. Whenever I disturbed them by cleaning their cages, their preferred method of defense was to fall off their web, curl up their legs, and pretend to be dead. They won’t even try to bite unless they feel severely threatened: most people who are bitten have either accidentally stepped or sat on a spider, or have foolishly tried to pick one up. In many areas of the US, including Florida, people live unknowingly in close proximity to widows who have made their webs in window frames, screen porches, or garages. I’ve seen widows and their eggsacs in some of Florida’s swankiest hotels.