Although the F-104 Starfighter was the first airplane to go twice the speed of sound, as a military jet it was a miserable failure, remembered mostly for its appalling accident rate and its central role in an international corporate scandal. 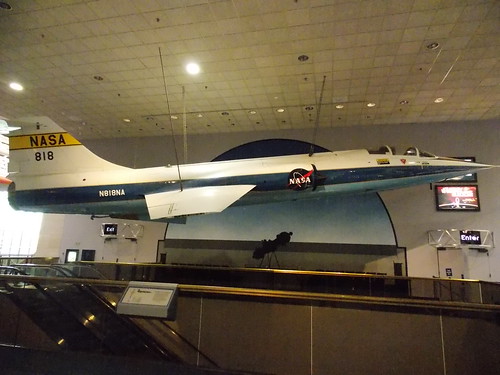 F-104 Starfighter at the Smithsonian Air and Space Museum

In 1954, the General Electric J79 jet engine became available. At the time, it was the most powerful engine in the world, and it would go on to power the B-58 Hustler nuclear bomber and the F-4 Phantom fighter/bomber. Legendary aircraft designer Kelly Johnson, from the Lockheed “Skunk Works”, also saw new possibilities with the engine, and began work on a new design of his own: an uber-fast fighter jet. The Air Force had just deployed its F-100 Super Sabre, the first jet capable of going supersonic (Mach 1) in level flight. Johnson’s new design would go twice as fast. It became known as the F-104 Starfighter.

To extract as much raw speed as possible, Johnson cut the F-104 down to the bare essentials; the new jet was essentially an engine with a cockpit and wings bolted onto it. To cut drag, the fuselage was narrow and round, requiring the pilot to sit with his legs straight out in front of him and his seat tilted back at an angle. The wings were absurdly small, measuring just seven and a half feet long and only four inches thick at their roots. (The wing’s leading edge was so thin that it had to be covered with padding during maintenance to prevent ground crews from cutting themselves on it.) This was too small to provide sufficient lift at low speeds for landing, so air was diverted from the engines to flow over the wings to give extra lift–a system known as “air bleeding”. The nose was too small for a targeting radar to fit inside, so the fighter was armed only with two short-range heat-seeking missiles and a six-barrel 20mm Gatling-gun cannon. The short wings could produce instability in flight, so to combat this the tail elevators were attached at the top of the tail fin in a “T” configuration. This, in turn, meant that the available ejection seat wasn’t strong enough to clear the tail, so the cockpit was modified to shoot the pilot down through the floor instead of up through the canopy. (Later versions were provided with a more powerful ejection seat that could clear the tail.)

At first, it was dubbed “the missile with a man in it”. And not only did it look like a rocket; it flew like one too. It reached speeds of Mach 2.2, over twice the speed of sound, and could rapidly climb to a height unreachable by any other plane, making it the first airplane to ever simultaneously hold the records for speed, climb rate, and altitude. Pilots began referring to it as the “Zipper”. No other plane in the world could keep up with it.

But the Starfighter had its share of problems, too, and they were serious. Basically, the wings were just too small. While the F-104 could zip along when flying in a straight line, it lost airspeed rapidly in turns, and its T-tail was subject to turbulence during climbs. To prevent a fatal stall, the approach to the runway had to happen at a dangerously high speed, making landings hazardous. Of the 296 Starfighters flown by the Air Force, 49 were lost in accidents, killing 18 pilots. The “Zipper” now became known as the “Widow Maker”.

Worse still, the F-104 proved to be useless in its intended military roles. It had been designed as a high-speed interceptor, able to take off, climb quickly to reach incoming enemy bombers, and shoot them down. But the tiny fuselage meant tiny gas tanks, giving it a range of only 300 miles, meaning it could only intercept bombers that were already close to their targets. And once the F-104 got there, it didn’t have any long-range radar-guided missiles, and had to rely on short-range Sidewinders that only worked if the weather was clear. In desperation, the Air Force pulled the Starfighter from interceptor duty and sent it to Vietnam as a low-altitude strike fighter, but it wasn’t suited for that either: it could only carry a small bomb load and lacked the range to be effective. Eventually the F-104 was removed from combat duty and was sent to Air National Guard units instead.

This left Lockheed in a bind. The company had sold less than 300 of the jets to the Air Force–not even enough to cover the development costs. Lockheed was already in trouble because of the commercial failure of its L-1011 airliner, and had already been bailed out by the US government (which guaranteed $200 million in loans to keep them afloat). If they did not sell a lot of F-104’s to somebody, quickly, the company would take a fatal financial bloodbath. Fortunately for Lockheed, the West German air force was looking to modernize its entire fleet of fighters, and in 1974 negotiated to buy 1,127 F-104’s, including some two-seat training versions. Other nations like Canada, Italy, Greece, Norway, Taiwan, Spain, Pakistan and Japan then also purchased Starfighters. In all, about 2,500 F-104’s were sold overseas. The so-called “Deal of the Century” pulled the Lockheed Company’s neck out of the financial noose.

Then in 1975 came a startling revelation: the overseas deals had not been reached because these countries were impressed by the F-104’s performance. Lockheed officials had systematically bribed key government and military officials in Europe and Asia, giving out over $20 million dollars in payoffs in exchange for Starfighter contracts. In West Germany, Defense Minister Straus had reportedly received $10 million; Japanese Prime Minister Kakuei Tanaka got $3 million; in Holland, Prince Bernhard took $1 million. Lockheed’s CEO and its Chairman of the Board both resigned. Japanese Prime Minster Tanaka was the only one sentenced to jail, for four years.

The F-104 was continuously updated and improved by the Europeans: new miniaturized radars allowed for all-weather operations with radar-guided missiles, and changes to the flaps allowed better maneuverability. In some countries, the jet remained in active service until 2004. But the “Witwenmacher” still continued to kill pilots who made any error. In all, the West Germans lost about one-third of their Starfighters, and 110 pilots, to crashes. Canada bought a total of 235 F-104’s, and lost 110 in accidents. Canadian pilots referred to the plane as the “Lawn Dart”.

Only one customer ever actually liked the F-104. The National Aeronautics and Space Administration bought 11 of them in 1956, fitted them with rocket motors on the tail and thrusters in the nose, and redesignated them the NF-104. The rocket motor boosted the jet to over 100,000 feet altitude, where the air was so thin that ordinary control surfaces like ailerons and rudders didn’t work. This allowed astronaut trainees to practice controlling their craft with maneuvering thrusters similar to those they would be using on their space capsules. The ultrafast Starfighter was also used as a chase plane for the X-15 program and for Space Shuttle landings. NASA continued to fly the F-104 until 1994.

Today, one of NASA’s F-104 Starfighters is on display at the Smithsonian Air and Space Museum.