The Apollo 8 mission, in December 1968, was an important stepping stone on the way to a manned landing on the Moon. And it also produced one of the most famous photographs ever taken. But the Apollo 8 mission wasn’t supposed to go to the Moon. It wasn’t originally even meant to be “Apollo 8”. 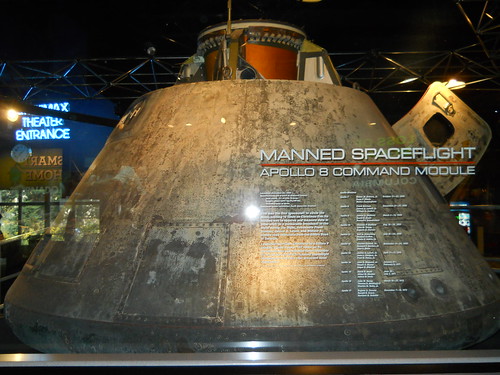 Apollo 8 Command Module, on display at the Museum of Science and Industry, Chicago

From the beginning, it was planned that the moon landing would be accomplished with the huge Saturn V rocket and the Apollo spacecraft. In the meantime, as the hardware for the Apollo missions was being designed and built, the Gemini program would use smaller and less complex craft to test the orbital maneuvering and docking procedures that would be needed for a Moon mission.

By 1967, the Apollo Command Module, the portion of the Apollo spaceship which would carry the crew to the Moon and return them to Earth, was ready for testing. But during a routine ground exercise, the “Apollo 1” Command Module caught on fire, killing astronauts Gus Grissom, Ed White and Roger Chafee, and forcing a long delay as the spacecraft was completely redesigned. After a number of unmanned test flights, the newly-rebuilt Apollo Command Module was ready for its first manned mission in October 1968. This flight, designated Apollo 7, used a Saturn 1B rocket to put three astronauts into Earth orbit to check out the Apollo CM.

Under NASA’s planned schedule, the next two missions would be manned tests of the Apollo Lunar Module, the portion of the Apollo craft which would take two of the astronauts down to the surface of the Moon and then carry them back up to the Command Module. Apollo 8, to be flown by James McDivitt, David Scott and Russell Schweickart, would test the LM’s systems in low Earth orbit, and Apollo 9, with Frank Borman, James Lovell and Bill Anders, would carry the Lunar Module partway to the Moon to test it in deep space.

However, a number of unexpected complications appeared. An unmanned test flight of the Saturn V rocket revealed vibration and engine problems that had to be fixed. There was a delay in producing the Lunar Module, and it would not be ready for at least three months. And in September 1968 the Soviet Union launched Zond 5, which sent a number of animal test subjects on a flight around the Moon and back to Earth. Speculation was immediately rampant that the Russians would quickly duplicate their feat with human cosmonauts, reaching the Moon first, stealing much of Apollo’s thunder, and scoring a propaganda coup.

As a result of all this, NASA altered its schedule: McDivitt’s Apollo 8 mission would be dropped, and Borman’s Apollo 9 would be renamed Apollo 8. There would be no unmanned test flight for the newly-fixed Saturn V–instead the new Apollo 8 mission would be the rocket’s first manned flight. And although there would not be any Lunar Module available for the mission, Apollo 8 would now be sent to orbit the Moon, allowing NASA to test its navigational procedures, perform reconnaissance for future landing sites, and, most important of all, beat the Soviets there. The Apollo 8 mission also came to have a domestic political purpose: 1968 had been a year of tremendous turmoil, with the Tet Offensive in Vietnam, the assassinations of Robert Kennedy and Martin Luther King, the Soviet invasion of Czechoslovakia, political rebellions in France, and race riots in American cities. It was hoped that a mission to the Moon would end the year on a positive note and give cause for hope and optimism.

Borman’s crew hurriedly began training for its new mission, to be launched in December 1968. If all went well, they would significantly advance NASA’s schedule for a manned lunar landing before the end of 1969. If the Apollo 8 mission failed, it would likely mean the end of the Moon program. Modifications to fix the Saturn V’s engine problems were still being made a mere three days before launch.

To everyone’s relief, when the Saturn V lifted off on December 21, it performed perfectly, placing the Command Module and its Service Module engine pack into orbit. Lovell, who was in charge of navigation, programmed the Apollo’s onboard computer for “Trans-Lunar Injection”, firing the Service Module engine to take the ship out of Earth orbit and towards the Moon.

It was now that the first serious problem appeared, and it was not a hardware problem. Borman was intensely spacesick, and was suffering from nausea, vomiting and diarrhea. Lovell and Anders notified NASA of the problem through a private radio channel not available to the public, and ground controllers gave serious thought to cutting the mission short, but after a day or so Borman felt better. Apollo 8 reached the Moon on December 24 and, firing the Service Module engine again, settled into an orbit around the Moon.

After checking all the spacecraft systems, the crew spent the next several hours filming and photographing the lunar surface 70 miles below them, looking for potential future landing sites. On the fourth orbit, Borman rolled the Command Module around to point the hatch windows out into space so Lovell could use a sextant to get a navigational fix on the stars. As Lovell did his calculations, Borman happened to notice the blue disc of the Earth just beginning to appear above the lunar horizon. “Oh my God, look at the picture over there!” he exclaimed, “Here’s the Earth coming up!” Both Borman and Anders scrambled to find a camera. Anders found his 70mm Hasselblad with a telephoto lens, and snapped a photo using the last exposure of the roll of black and white film that was in the camera. Hurriedly, he reloaded the camera with color film, carefully framed his shot, and snapped what would become one of the most famous photographs ever taken. 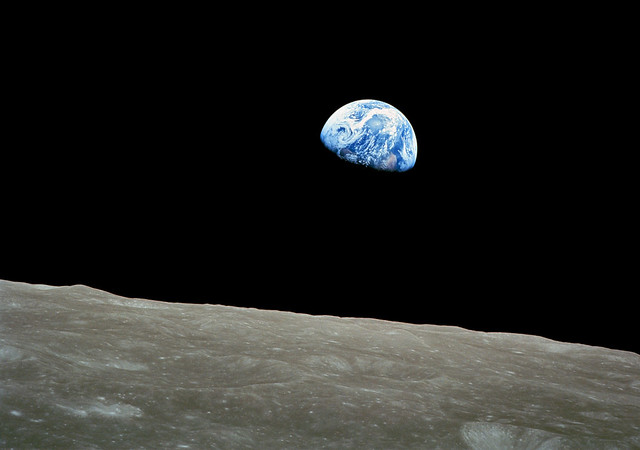 From the Moon, the Earth is small and insignificant–about the size of a thumbnail at arm’s length. But in Anders’s telephoto lens, it loomed large, with its spectacular blue and white surface contrasting sharply with the lifeless grey Moon and the vast black emptiness of space around it. “Earthrise” forever changed the way humans viewed our fragile little planet.

Before leaving the Moon, Apollo 8 was scheduled to make a live TV broadcast back to Earth. It was Christmas Eve, and NASA had asked the astronauts to do something “appropriate”. All three of the crewmen were deeply religious, and they decided to do a short reading from the Bible. But rather than a Christmas story, they wanted to present the first ten verses of Genesis, because, they thought, the Old Testament creation story was a central part of several religions other than Christianity and would have more appeal to a worldwide audience. After the reading, Borman signed off by saying, “Good night, good luck, a Merry Christmas, and God bless all of you, all of you on the good Earth.” It was the most-viewed broadcast in world history until the Apollo 11 moon landing seven months later.

Now came the riskiest part of the mission. To leave lunar orbit and return to Earth, the Service Module engine had to be fired while the spacecraft was on the far side of the Moon, out of radio contact with ground control. This was the first rocket engine designed to be restartable, and if it failed, there was no backup: Apollo 8 would be marooned in lunar orbit. But when the Command Module re-emerged from behind the Moon, Lovell reported that the burn had gone as planned, adding, “Be advised, there is a Santa Claus.” It took three days for the spaceship to return to Earth from the Moon, and the Command Module splashed down in the Pacific on December 27.

Today, the Apollo 8 Command Module is on display at the Museum of Science and Industry in Chicago.

One thought on “The Flight of Apollo 8”