In the history of the US, there have been four Presidents who were cut down by assassin’s bullets. Probably the most obscure is the death of James Garfield, who was shot by Charles Guiteau in 1881. But Garfield’s assassination came at a time of profound change in the American political system–and in the end helped to push that change forward. 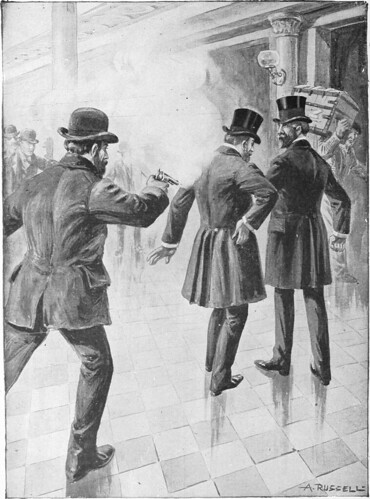 In the latter part of the 19th century, the United States Government was, quite bluntly, a kleptocracy. At the center of both the Republican and Democratic parties were “machine politics”, in which candidates were selected in proverbial “smoke-filled rooms” by party bosses, who used any means–fair or foul, legal or illegal–to deliver the votes needed to get their candidates in office. The payoff was the “spoils system”, in which successful office-winners were entitled to appoint thousands of government jobs, which naturally went to the people who had helped get them elected. Under this “patronage” system, corruption and bribery became an art form.

The low point of all this was reached in the Grant Administration from 1869 to 1877–although Ulysses S Grant himself was personally above reproach, most of his administration eventually found itself under investigation for various accusations of bribery and corruption, the most famous of which were the Teapot Dome Scandal and the Credit Mobilier Scandal.

In 1880, however, the Republican Party found itself divided. The party machine was supporting former President Grant again as the Presidential candidate (there was at that time no Constitutional limit on presidential terms). Calling themselves the “Stalwarts”, they wanted to continue the patronage system which was the source of their power. But an insurgency had arisen within the party (known as the “Half-Breeds”) which wanted to return the Republican Party to the principles of Lincoln–economic, social and racial equality. Their candidate was Maine Senator James Blaine.

At the Party’s nominating convention, a deadlock resulted. After 34 ballots, neither candidate had received enough votes for the nomination. In frustration, delegates from both camps began changing their votes, and to everyone’s surprise, the nomination went to a little-known Congressman from Ohio named James Garfield. Garfield had given the nomination speech for the insurgent candidate Senator Blaine.

Garfield was opposed to the Stalwart faction. But he was also a realist, and upon obtaining the nomination he understood that if he wanted to win the election, he needed to unite the Republican Party by reaching out to the Stalwart faction. In particular, he needed the backing of New York’s political machine, run by Senator Roscoe Conkling, a Stalwart. In return, under the unwritten rules of the spoils system, Conkling wanted two things–his aide Chester Arthur would be placed on the ticket as Vice President, and after the election Conkling would be appointed to run the New York Customs House–the tax-collection agency for New York Harbor, which was rife with bribery and embezzlement.

The 1880 election was a close one, but in the end, Garfield won. Conkling was elated, and confidently visited the White House expecting his reward–appointment as customs officer. Instead, Garfield now decided that as President he would take a stand against the Stalwarts and the patronage system, and shocked Conkling (and everyone else) by giving the job to someone else. In a deft political ploy, Conkling resigned his Senate seat, triggering a special election in the New York state legislature which, he assumed, would re-appoint him back to office, strengthening his hand against Garfield. Instead, there came another shock as the legislature appointed somebody else. The Stalwart faction was losing its grip on power.

In the meantime, although Garfield was opposed to the spoils system, it was still in effect; the President was responsible for filling thousands of patronage jobs, from tax-collectors to ambassadors, and everyone who had played any role in getting him elected felt entitled to an appointment. After every election, the White House had always been besieged by thousands of office-seekers who were begging for a government job, and Garfield was no different.

Among the hundreds of people who lined up at the White House every day was Charles Guiteau, a lawyer from Chicago. Guiteau had been a Stalwart and wrote pamphlets praising Grant, but after the convention he worked in Garfield’s national campaign office, where he had met Chester Arthur and Senator Conkling, had written a campaign pamphlet, and had been mentioned in the newspapers as a Garfield campaign speaker. On one occasion, at a fundraiser, he had presented his business card to Garfield’s wife.

Guiteau was an odd character who was almost certainly mentally ill. His family had tried to have him committed to an insane asylum, but he had fled. He had grown up as a strict religious Christian, but then joined the Oneida “free love” religious commune in Ohio before leaving and becoming a drifter, eventually getting into politics. Now, after Garfield’s election, Guiteau decided that he too deserved to be rewarded with a patronage job for his role in the campaign. After dozens of tries, he finally got to meet with Garfield and solemnly informed him that he wanted to be appointed as a diplomat to France. Garfield shunted Guiteau over to the State Department, where after a few meetings with Secretary of State Blaine, he was flatly turned down. In vain, Guiteau tried so many times to meet with Blaine to press his case that the State Department staff nicknamed him “Charles Gitout”.

Of course, many of the people who wanted jobs with the administration never got one. But Guiteau reacted differently than all the rest–he decided to kill Garfield. After his arrest, Guiteau claimed that he had heard voices from God telling him to kill the President, but this may have been just been a ploy to bolster his insanity defense. Guiteau also told police that he thought Garfield’s death was the only way to unite the factions in the Republican Party, that the Stalwart faction of the party would be grateful to him, and that once Chester Arthur was President he would pardon Guiteau and give him the diplomatic job that he wanted.

Guiteau bought a .442 Webley Bulldog pistol and, knowing nothing about guns or shooting, took it to the banks of the Potomac River, not far from the White House, to practice with it. Later, he told police that he had specifically picked a gun with ivory handles because, he said, he thought it would look nice on display in a museum.

For the next few weeks, Guiteau followed Garfield around, waiting for an opportunity to act. It finally came on July 2, 1881. As Garfield walked with Secretary Blaine across the platform at the Washington DC train station, Guiteau approached him from behind and fired two shots. One bullet hit Garfield squarely in the small of the back; the other hit him in the arm. As Guiteau was run down and tackled by bystanders, he shouted, “Arthur will be President!” and “I am a Stalwart!”

There was immediate speculation in the press that the shooting was a Stalwart conspiracy to overturn the government, perhaps even involving Vice President Arthur, but it soon became apparent that Guiteau was unbalanced and had acted on his own. Garfield, meanwhile, was in the White House under the care of his personal physician, Dr Willard Bliss. Bliss made several attempts to probe Garfield’s wound for the bullet, and Alexander Graham Bell was even brought in with a crude experimental metal detector, but it was never found. Bliss, like many American doctors of the time, did not accept the European theory of germs and sterilization and did not disinfect his instruments, but it is likely that, in an age before antibiotics, the bacteria carried into the wound by the bullet would have produced a fatal infection in any case. Garfield lingered for over two months before dying on September 18. After a media circus of a trial, Guiteau was hanged in June 1882.

In January 1883, Ohio Senator George Pendleton, in response to the circumstances around the Garfield assassination, introduced and passed a bill requiring that all of the most important government positions were to be filled on merit and through a set of competitive tests. As a result, the Civil Service Commission was formed, which eventually grew to oversee all government hiring. The corrupt “spoils” and “patronage” system was ended.

3 thoughts on “The Assassination of James Garfield”