The Fokker Dr1 Triplane is one of the most famous airplanes to come out of the First World War, mostly because of its association with the Red Baron Manfred von Richthofen. But in reality, the Fokker was plagued by problems, was made only in small numbers, and served for only a short time. 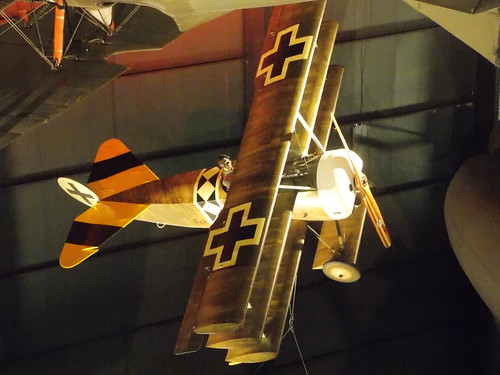 Fokker Dr1 on display at the USAF Museum

In April 1917, the British naval air corps introduced a new fighter over the Western Front. The Sopwith Triplane was the first three-winged aircraft to play a serious role in the war, and it quickly proved to be a formidable weapon against Germany’s biplane Albatros D fighters.

The Germans were impressed with the design, and wanted a triplane of their own. The task fell to Anthony Fokker. Fokker’s team was already working on a new biplane dubbed the Fokker D6, and he now modified this design into a triplane. The first prototype was test-flown by German ace Werner Voss in July, and advice was also sought from Manfred von Richthofen. The German Army turned over a Sopwith Triplane that had crashed behind its lines: Fokker personally flew the repaired British plane and incorporated some of its design features, but the German triplane also differed significantly from the Sopwith. The Fokker had two synchronized machine guns firing from the engine cowl, in contrast to the single machine gun carried by the Sopwith. The Sopwith Triplane had ailerons on all three wings, but Fokker’s design placed control surfaces only on the top wing. The bottom two wings were attached to the fuselage, and the top wing was supported by steel-tube V-struts. There was no tail-wheel: the Fokker used a steel-tipped wooden skid instead. The axle between the main landing gear wheels was covered with a short airfoil that acted as a sort of half-wing, adding lift.

The triplane was fitted with a 110-horsepower Oberursel 9-cylinder rotary engine. This underpowered engine, combined with the high-drag three-wing design, gave it a significantly lower speed (about 115 mph) than the British fighters, but the three wings combined with its relatively small size gave the German triplane a phenomenal rate of climb as well as superb maneuverability–traits which had been strongly emphasized by Richthofen and Voss during the design process.

In August 1917 the design was completed, and was designated the Fokker Dr1 Dreidekker. On August 30 Voss took one of the first production models on a combat patrol and shot down a British fighter. On September 1 Richthofen took another Dr1 on a combat mission and shot down an English RE8, his 60th air victory, and his first in the aircraft that would forever be associated with his name. He shot down another British fighter the next day.

The first batch of Dr1’s to be manufactured were assigned to Voss’s Jasta 10 and Richthofen’s Jasta 11 squadrons. These were elite hand-picked units with experienced pilots, most of whom were already high-scoring aces. In their hands, the Dreidekker proved to be a lethal weapon, capable of defeating even the new British Sopwith Camel and SE5a. Within four weeks, Voss had shot down 20 Entente aircraft. (Just a short time later, Voss was shot down and killed when he singlehandedly took on a flight of five British SE5a fighters, all of them flown by high-scoring aces.)

But there were problems. It was not an easy plane for rookie pilots to fly: the handling was very touchy, particularly during landings. It also had a limited gasoline supply, which allowed it to stay in the air for only 80 minutes. The rotary engines used castor oil as their lubricant, and by 1918 this was in short supply and was replaced by several different inferior substitutes, leading to an epidemic of engine failures. Almost immediately after their introduction, in two separate incidents, two Dr1’s had crashed after their top wing broke off during flight. All of the Dr1’s were immediately grounded for a month while the crashes were investigated. Fokker declared that the problem was the result of poor workmanship during assembly and immediately designed stronger attachment points, but the accidents continued. (In March 1918, while in combat with British Sopwith Camels, the Dr1 flown by Lothar von Richthofen, the Red Baron’s brother and himself a high-scoring ace, was crippled when the leading edge of the upper wing broke off: Richthofen was seriously injured in the crash.)

These incidents tarnished the Dreidekker’s reputation and the German air service began searching for a replacement. Only 318 Fokker Dr1’s were produced, and no more than 171 were ever in service at one time, serving in 14 different squadrons. By June 1918, the Dr1 was being replaced by the Fokker D7 biplane.

Nevertheless, the Dr1 gained a fearsome reputation, mostly because it was flown by some of the best combat pilots of the First World War. In addition to Voss (60 air victories) and Richthofen (80 victories), the Dr1 was flown by aces Ernst Udet (63 victories), Josef Jacobs (47 victories), Paul Baumer (43 victories), Lothar von Richthofen (40 victories), Karl Bolle (36 victories), and Karl Allmenroeder (30 victories). From the factory, the Dr1 was painted in a streaked olive-brown scheme, but the members of Richthofen’s elite Jasta 11 squadron customized their personal aircraft with individualized paintjobs so they could easily recognize each other in the air. The often-gaudy colors led their British opponents to refer to the Germans as “The Flying Circus”. 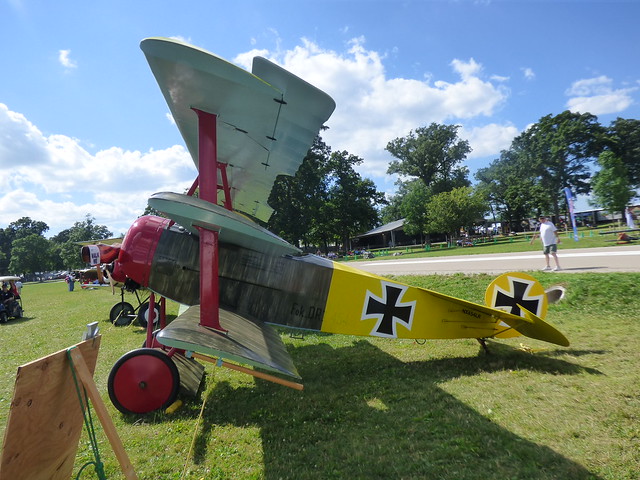 A replica Dr1 in the livery of Lother von Richthofen

In the end, the Fokker Dr1’s wing troubles and slow speed doomed it to obsolescence. As it was replaced by the Fokker D7, the Dreidekker was sent to rear units and used for training. After the war ended in November 1918, a number of Dreidekkers were taken to France and England for flight testing. But within a few years, only a few Dr1’s are known to have still been in flying condition. One of these, serial number 528/17, was used as a test plane by the German Army and was used during the filming of at least two 1920’s war movies, but it disappears from records in the early 1930s and was likely destroyed in a crash. Serial number 152/17, one of the personal Dr1’s used by Manfred von Richthofen, was on display at a Berlin air museum. It was destroyed during a World War Two bombing raid. There are other stories which have another von Richthofen plane, serial number 425/17, being moved from Berlin to safety in the countryside, only to have been chopped up for firewood by war refugees. In 1932, Anthony Fokker assembled a complete Dr1 from existing spare parts; it was displayed by another Berlin museum and was also destroyed in a bombing raid.

Today, no authentic wartime Fokker Dr1’s exist. However, copies of the original factory blueprints still survive, and a number of replicas have been built from these plans. Those that are intended to fly are usually built with small radial engines instead of the original rotaries, and have modern avionics in the cockpit. In 1966, however, Twentieth Century Fox built two Fokker Dr1’s, fitted with vintage LeRhone rotary engines, for its George Peppard movie “The Blue Max”.

In 1994, the US Air Force Museum in Dayton OH placed a replica Fokker Dr1, built from factory drawings, on display. It is painted in the livery of Arthur Rahn, a 6-victory German ace.