In the early years of Florida tourism, many entrepreneurial showmen took advantage of the state’s tropical climate to set up staged “jungle” attractions. And thanks to them, Florida has one of its most adaptable and intelligent invasive species. 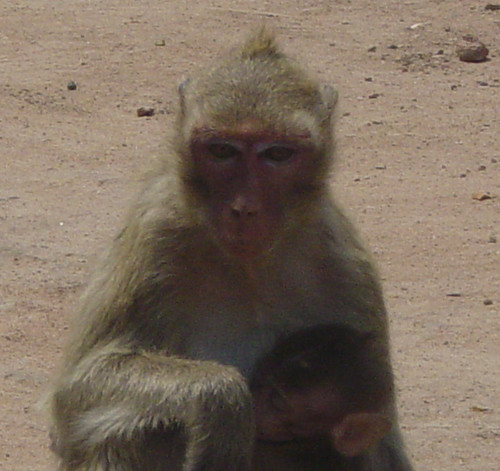 There are dozens of monkey species inhabiting South and Central America, but the US is (other than humans) completely primate-less. Or at least it was until the 1930’s. That’s when the Rhesus Monkey was introduced to Florida.

According to local legend, the monkeys were brought here in 1939, when Hollywood came to Silver Springs, just north of Tampa Bay, to film one of its popular “Tarzan” movies with Johnny Weissmuller, titled “Tarzan Finds a Son”. As background, it is said, the filmmakers packed along some Rhesus Monkeys–which promptly ran off into the trees and were never found.

Alas, that story is a myth. There were no monkeys of that species used in the filming. Instead, the most likely origin story for the Florida Rhesus troop is that, in 1938, a local promoter who called himself “Colonel” Tooney set up a “jungle boat ride” attraction, and imported three pairs of Rhesus Monkeys for the tourists to look at. Within days they had escaped their island and were running free, and while Colonel Tooney was unable to recapture them, he was able to feed them regularly with fruits and monkey chow to keep them near the riverbank where the tourists could see them. Over time, the monkeys did what monkeys do, the troop got bigger and split into first two, then three separate groups. By the 1980s there were three populations, each with a number of troops. Around 300 Rhesus were living near the original Silver Springs release site, while another 250 or so had moved to the nearby Ocala National Forest.

For the most part, the primate invaders have been pretty harmless. They seem to do no harm to Florida’s native species, though the monkeys do on occasion frighten off human residents as they raid backyard gardens and fruit trees. Some of the locals feed the monkeys in the wintertime. The local Alligators have also learned to leap out of the water and nab the primates off overhanging tree branches.

In 1984, though, Florida wildlife officials decided to wage an all-out effort to remove the invaders. In all, 217 of the Rhesus were trapped and sold to zoos or research labs. But it was quickly realized that the monkeys were clever and canny, and although some 700 individuals have been captured by wildlife officials in the past ten years, nobody thinks it makes any serious dent in the primate population. The most apparent problem seems to be that many of the captured Rhesus were found to be infected with the herpes-B virus, and could present a potential danger if they were to bite a human or a pet. The FWC now warns people to stay away from the primates.

Today, the original three pairs of Monkeys have expanded to an estimated 1000 individuals, and Rhesus sightings have been reported from as far away as Jacksonville, 100 miles away. But the most celebrated Rhesus sighting was in 2008, 100 miles in the other direction in St Petersburg, when several residents reported seeing a “Mystery Monkey” in their yards. Photos ID’d it as a Rhesus, and most people assumed that it was a wanderer from the Silver Springs colony (though, as a solitary individual, it may also have been an illegal pet that escaped or was released). For the next four years, the Wildlife Commission tried to capture the Rhesus, who evaded all attempts. “Mystery Monkey” became a media celebrity, and got his own Facebook page and Twitter account as local and national newspapers followed his adventures. Finally, in 2012, the Rhesus was successfully darted and tranquilized. He now lives in a zoo in nearby Pasco County.

Although the Rhesus troops are the most successful primates known to be breeding in the Florida wild, other species also turn up from time to time. Back in the 50’s, a group of Vervet Monkeys escaped from a roadside zoo near Ft Lauderdale and headed for the trees, where their descendants can still be found on the grounds of the local airport. In 2008, another group of 15 Patas Monkeys escaped a private zoo north of Tampa: state officials were able to trap 14 of them, and the last one was shot by a hunter.