“Morgellons Disease” is one of the oddest social phenomena of the 21st century. Its devotees claim to have an unknown disease in which their skin grows mysterious fibers; medical science is unanimous in concluding that the disease is not real. What is certain is that “Morgellons” is a product of the Internet Age. More specifically, it is the product of one person’s search on the Internet. 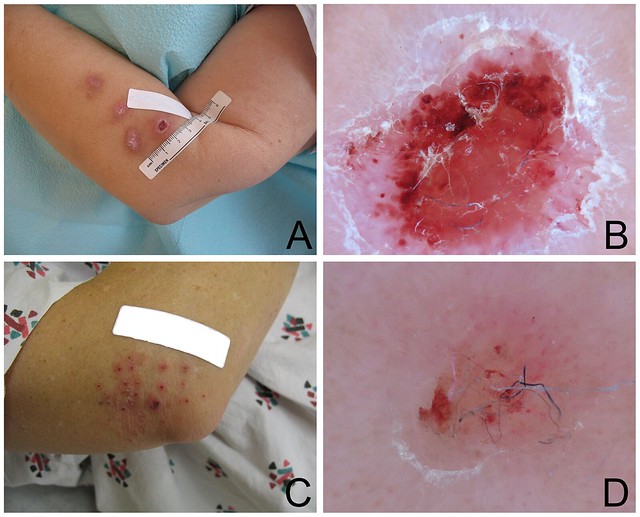 In 2002, the two-year old son of Mary Leitao, a Pennsylvania lab technician, began crying that he had “bugs” and developed a persistent rash under his chin which he kept scratching. His pediatrician could find nothing wrong, and concluded that her son was simply scratching at his skin and causing scabs which he then continually kept picking open. When Leitao kept taking her son to different doctors for more examinations, they concluded that she was suffering from “Munchausen by proxy”, a not uncommon phenomenon in which people bring their children (or themselves) to seek repeated medical treatment for trivial or non-existent symptoms just to get attention or sympathy.

Rather than undergo the psychiatric evaluation that the pediatrician suggested, Leitao decided that the doctor was wrong, and undertook her own “investigation”. When she scraped some skin from her son’s chin and looked at it through a toy microscope at home, she saw a series of colored fibers, some of them embedded in his scabs. Looking on the Internet, Leitao came across a story from 17th century France, in which children in the town of Languedoc were afflicted with an itchy rash which often produced “hairs”. The “hairs” were in fact soon identified by an Italian naturalist, Giovanni Cosimo Bonomo, as the legs of the scabies mite, and this incident marks one of the first times in history that a human disease was identified with a specific natural cause.

But Mary Leitao had a different idea. She decided that the “hairs” described in the French children from the 1620’s were actually the same sort of multicolored fibers that she was seeing in her toy microscope, and that her son’s skin was itself somehow producing these fibers, causing his irritation. Since the skin sores in France had been referred to as “les morgellons“, she dubbed her new “finding” as “Morgellons Disease”. In 2004, she and her husband (who was also a medical professional) formed a nonprofit advocacy group called the Morgellons Research Foundation (MRF), and put up a website. In due course, she announced that two more of her children had “Morgellons” as well.

The website soon attracted devotees and followers, as other people now decided that they too had “Morgellons Disease”. They exchanged stories on the Internet about how they found colored fibers growing out of their skin, took samples to their medical doctors, and were dismissed as hypochondriacs or Munchausens. In 2006, members of the Morgellons Research Foundation managed to publish an article in the American Journal of Clinical Dermatology, describing their “disease” and accusing the medical community of ignoring their suffering and suppressing their “findings”. That led to press coverage, and the phenomenon grew by leaps and bounds, culminating in the announcement in 2010 by former folk singer Joni Mitchell that she, too, had Morgellons. In the meantime, the MRF, from its website, coordinated a letter-writing and email campaign which flooded Congress with calls for an investigation into the “disease”, and in 2006 a number of prominent Senators, including Hillary Clinton, John McCain, Dianne Feinstein, and Barack Obama, backed a request that the matter be studied by the Centers for Disease Control (CDC) in Atlanta. Estimates of the number of people claiming to have “Morgellons Disease” ranged from 4,000 to 20,000–cases were reported from as far away as Russia and Australia, but the large majority of “Morgellons” cases came from California.

The study took several years, and included the submission of fiber samples from over 100 “Morgellons patients”. In 2012 the CDC released its report. There was, it concluded, no medical indication whatever for the existence of “Morgellons Disease”, no indication of any biological or infectious cause for it, and no evidence that anyone’s skin was producing any sort of “fibers” or any other material. All of the fiber samples submitted as “evidence” were identified as either plain old ordinary cotton, polyester or rayon textile threads from clothing and carpets, as fungal structures known as hyphae which commonly float around in the air, or, in extreme cases, as actual human nerve fibers dug out of their own skin by people who kept picking their scabs open. Some “Morgellons Disease victims” were probably suffering from known conditions like contact dermatitis, the report noted, but most had no actual disease at all, and instead appeared to be exhibiting the symptoms of a well-known psychological disorder called “delusional infestation”, in which people believe that there are bugs or worms or other parasites living underneath their skin.

After the CDC’s report, the conspiracy theories exploded. The CDC report was, devotees claimed, a “coverup”. And why would the US Government engage in a multi-year conspiracy to convince people that there are not actually carpet fibers growing out of their skin…? The fantasies went wild: while most Morgellons devotees believe that the mysterious fibers are some sort of shelter for unknown sub-dermal parasites, a substantial minority favor even more exotic “explanations” involving government conspiracies. Some declared that the fibers were the result of military germ warfare experiments, others that they were produced by GMO food. Some whispered that it was a medical experiment being performed on humans by space aliens. A few are convinced that it’s secret nanotechnology experiments. At least one “expert” has announced that Morgellons is caused by the same bacteria as “Chronic Lyme Disease”–another “disease” which the CDC has concluded does not exist.

Although the Morgellons Research Foundation closed down in 2012 after the CDC’s report, it was quickly replaced by several new advocacy groups and websites and whole Internet forums are now dedicated to “Morgellons”, where devotees decry the global medical conspiracy against them, post photos of the colored carpet fibers purportedly growing out of their skin, and tell each other about supposed “treatments” (everything from washing with chlorine bleach to years-long regimens of antibiotics, often illegally obtained). All of them are self-diagnosed. No plausible mechanism has ever been proposed by anyone as to how human skin could produce synthetic textile fibers, nor has any medical professional ever discovered any sort of fiber actually growing out of a patient’s skin. Every once in a while stories are circulated amongst devotees about “police detectives” or “FBI experts” who examine the mystery fibers and pronounce them “unknown”, but none of these has ever been substantiated by an actual forensic report.

It seems that the primary cause of “Morgellons Disease” is the Internet, and a willingness to believe.

5 thoughts on “The Odd Phemonenon of “Morgellons Disease””