In the 1950s, two medical researchers in the US produced workable vaccines for polio, using different methods and approaches. It was one of the most significant medical breakthroughs of the 20th century–but it also provoked a spectacular lifelong feud between the two. 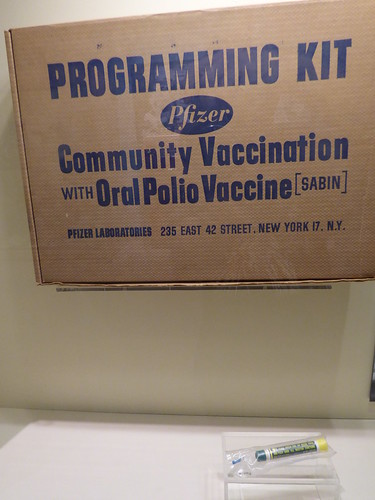 But one disease still caused fear–polio. Poliomyelitis, or infantile paralysis, attacked the nervous system, killing about 10 percent of its victims and often leaving the survivors partially paralyzed, in wheelchairs or crutches and braces. Some survivors had their chest muscles permanently paralyzed, and had to live in an “iron lung” (a vacuum chamber that pumped air in and out of their lungs). Polio most often struck young children, though adults were vulnerable too (the most famous victim of polio–President Franklin D Roosevelt–had both legs paralyzed in 1921 at the age of 39). Each year, between 25,000 and 50,000 Americans contracted the disease, and around 3,000 died.

The pressure on the public health system to find a vaccine or cure for polio became enormous. A charitable group called the National Foundation for Infantile Paralysis was formed to raise money from the public to fund polio research (years later, the Foundation would change its name to The March of Dimes). It became one of the largest nonprofit groups in the US.

One of the researchers who was receiving funding from the National Foundation was Dr Jonas Salk, at the University of Pittsburgh. Years before, Salk had been part of a team that successfully developed a variety of influenza vaccine using a new method. Previous vaccinations had been prepared by finding weakened or “attenuated” strains of disease organisms and injecting these into the body, where they provoked the immune system into manufacturing antibodies which would then protect against the more virulent normal strains. Salk’s teammates, however, had developed a way to make “killed-virus” influenza vaccines, in which the actual disease organisms themselves would be killed with formaldehyde and then injected, producing the antibodies which would then protect against the live pathogens. Salk thought that this same “killed-virus” approach would be effective against polio (researchers at Johns Hopkins University had already successfully vaccinated monkeys against polio using killed-virus formulas). With funding from the National Foundation for Infantile Paralysis, Salk developed a new killed-virus vaccine, successfully tested it on monkeys, and in 1952 was ready for human trials.

With the help of the National Foundation, Salk recruited almost two million volunteer test subjects nationwide, all of them children between age 3 and 6. They became known as “Polio Pioneers”. Half of them were injected with Salk’s vaccine, and the other half were injected with an inert placebo as a control. They were then carefully monitored for the next year. The results were spectacular; the level of polio infection in the vaccinated group fell by some 90 percent. In April 1955, the US government’s Public Health Service approved the Salk vaccine for use. Dr Jonas Salk was hailed as a national hero.

But there were problems.

All along, a significant number of medical professionals were doubtful that the new killed-virus type of vaccine could provide the same level of protection as an old-style vaccine using an attenuated live virus. One of these was Dr Albert Sabin at the University of Cincinnati. During World War Two Sabin had worked for the US Army to produce a vaccine for dengue fever, a tropical disease often caught by American troops. By 1955, Sabin had developed his own polio vaccine, based on three strains of attenuated polio virii, and had already done some human trials using 30 inmate volunteers at the nearby Chillicothe State Prison. Sabin asserted that his vaccine was safer and gave stronger immunity than the Salk vaccine. But Salk had the funding and support of the National Foundation for Infantile Paralysis and, after 1955, of the US government. Sabin was unable to gather the resources for a large-scale testing program. Frustrated, he began circulating a series of letters attacking Salk, the National Foundation, and anyone else who supported the killed-virus vaccine, calling it more dangerous and less effective than his live-virus vaccine. The feud between Sabin and Salk quickly turned personal, and would rage on unabated for the rest of their lives.

Then, two events happened which would give new life to Sabin’s efforts. In 1955, one of the first production batches of Salk’s vaccine, made by the Cutter company in California, was improperly prepared and contained live virulent polio virus; all the 200 children who received the shot were infected, and eleven of them died. Although the manufacturing process was altered to prevent this from happening again, the incident sparked new interest in an alternative to the Salk vaccine, and Sabin finally got his chance. Although the American pharmaceutical companies were already devoting their resources to manufacturing the Salk formula and could not spare the time to make large amounts of the Sabin vaccine for testing, Sabin, through the United Nations, was able to find someone who did have the ability to produce and test the vaccine on a large scale–the Soviet Union. In 1957, the USSR’s Ministry of Health agreed to test Sabin’s live-virus vaccine for the UN on 20,000 Russian schoolchildren, expanding this over the next two years to 3 million and then 10 million. The tests were a complete success: the USSR made plans to inoculate its entire population of schoolchildren, and the UN’s World Health Organization contracted with the Soviet Government to produce a version of Sabin’s vaccine for distribution around the world.

Meanwhile, in the United States, a 1960 medical study found a disturbing pattern in polio vaccinations: only one-third of the under-40 American public had received the full Salk polio vaccination, and it tended to be clustered into the white suburban upper and middle class. Much of the rural and urban poor and non-white population was still unprotected. The problem was with the Salk killed-virus vaccine itself. It took a relatively large number of dead virii to provoke an effective antibody response sufficient to provide immunity, and this could only be done by spreading the inoculation out over a series of three injections. While this was not a problem for the well-off, paying for three separate doctor visits was a challenge for the economically-disadvantaged. But because the live attenuated virii in the Sabin vaccine could reproduce, it required only the introduction of a small number into the body (which could be done by swallowing a single sugar pill without any need for a series of needles). The rapid reproduction of the attenuated virii inside the body also produced immunity much more quickly than the killed-virus shots, allowing the Sabin vaccine to be administered effectively even during an outbreak. The US government decided that the Sabin vaccine was cheaper and that the oral delivery was easier to give to children than Salk’s series of shots. In 1961, the Salk vaccine was dropped and the Sabin vaccine was adopted for use within the United States. Thus, although the killed-virus vaccine had come first and had made Dr Salk world-famous, it was the Sabin live-virus vaccine, used worldwide, that virtually eradicated the polio virus. As Sabin pithily put it, “I invented the polio vaccine, not a polio vaccine.”

But the Sabin vaccine had a problem of its own. Since the virii used in the vaccine were alive and could reproduce, they were also capable of undergoing genetic mutations just like any other living thing. And in a tiny number of cases (about one out of 8 million doses) some of the virii would undergo a mutation that actually made them virulent again; instead of harmlessly provoking an immune antibody reaction, they would actually infect the vaccinated person with polio. And so once polio had been eradicated inside the United States, the US government decided to switch again, from Sabin’s live-virus vaccine back to Salk’s safer killed-virus.