The Mitsubishi A6M Zero fighter is one of the most famous aircraft of the Second World War. For several years, it dominated the skies over the Pacific. But, like the island nation that built it, the Zero was unable to keep up with the industrial power and technological advances of its opponents. 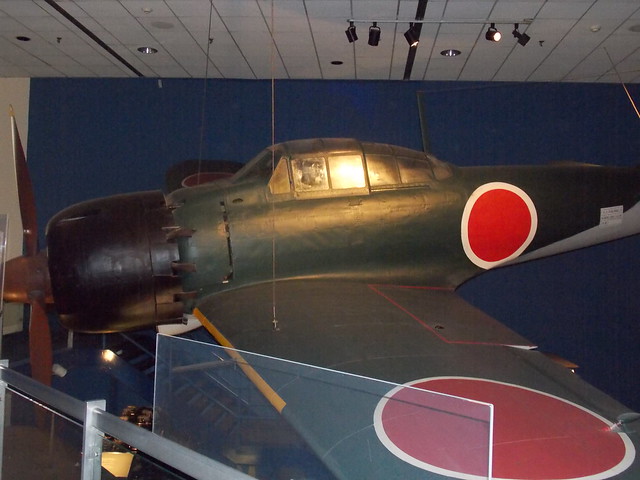 A6M5 Zero on display at the Smithsonian Air and Space Museum

The first aircraft carriers had been built by Britain in the last years of the First World War. The United States followed during the 1920’s. But the tiny island of Japan, who held dreams of forming an empire in east Asia, became the most enthusiastic proponent of naval air power, and built one of the largest carrier fleets in the world.

In 1937, Japan had been locked in a war with China for several years, and had already conquered most of the coastal areas. The Japanese Navy had just introduced a new fighter plane, the Mitsubishi A5M Type 96, a low-wing monoplane with fixed landing gear which was given the code name “Claude” by American intelligence. The Claude quickly established itself as a nimble fighter, capable of taking out anything the Chinese could put in the sky–including American and British designs.

But Japan had bigger ambitions and was already planning for new military conquests–either a move against the Soviet Union into Siberia, or a thrust into southeast Asia to sieze the Dutch, British and American possessions there. Either move would, the Japanese knew, bring war with the British and American fleets, and that would require a fighter plane even better than the Claude.

So just a few months after the A5M took to the skies, the Japanese Navy released specifications for a new fighter to replace it, to be known as the A6M. The new plane had to have a speed of 310mph at 13,000 feet, it had to be capable of climbing to 9800 feet in 3.5 minutes, and it had to be able to fly for 6-8 hours at cruising speed, and a minimum 2 hours on normal power. Finally, it had to be at least as maneuverable as the Claude and carry the same armament–two .30-caliber machine guns and two 20mm cannon. It was a performance standard that no plane in the world at that time could match.

The Nakajima company kicked around some preliminary designs, but decided that such a plane was simply impossible with current technology. A design team at the Mitsubishi company, however, led by Jiro Horikoshi, concluded that these standards could be met, but only if the plane were exceptionally lightweight. Horikoshi’s design therefore took every possible opportunity to save weight. The fixed landing gear of the Claude was replaced by retractable gear. The A6M’s skin would be made from a new lightweight aluminum alloy. A smaller air-cooled radial engine, the Zuisei-13, would be used to drive a two-bladed propeller. And, to save more weight, the plane would have no armor plating to protect the pilot; even the gas tanks would have their self-sealing rubber coatings dropped from the design.

Two prototypes were completed in 1939. The test flights revealed some problems with vibration, so the two-blade prop was replaced with a three-blade, and the Mitsubishi Zuisei engine was replaced by the slightly more powerful Sakae-12, which was manufactured by the Nakajima company. The resulting aircraft was designated the Mitsubishi A6M2, and was adopted by the Japanese Navy as the Type Zero Carrier Fighter, or Reisen. The Allies gave it the codename “Zeke”, but it was always known to British and American pilots as the Zero.

The Zero had been developed in complete secrecy, and when it first appeared in the skies over China in 1940, it was a total surprise. The British and Americans, in a fit of silly racism, had dismissed the Japanese as nearsighted inferiors who could neither build nor fly a credible airplane. The Zero demonstrated how wrong they were. Not only were the Japanese Navy pilots some of the best-trained in the world, but their Zero fighter could outmaneuver anything else in the sky. The first Zero squadron in China shot down 99 Allied planes with the loss of only two of their own. One flight of 27 Soviet-built fighters had been completely destroyed. When Claire Chennault, commander of the American “Flying Tiger” volunteers in China, sent reports to the US describing the performance of the new Japanese fighter, American intelligence simply did not believe him, concluding that such an airplane could not exist. The Japanese Navy, meanwhile, ordered both the Mitsubishi and Nakajima companies to begin manufacturing carrier-based Zeros. 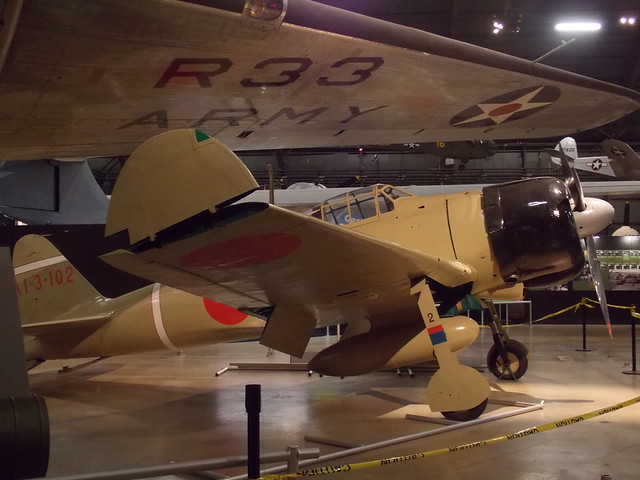 A6M2 Zero, on display at the US Air Force Museum, Dayton OH

By the time the Japanese launched their carrier attack on Pearl Harbor in December 1941, they considered the Zero fighter to be the combat equivalent of at least 4 or 5 Allied P-35, P-39 or P-40s. Although the Imperial Japanese Navy carriers had over 400 A6M2 Zeros available, they elected to use less than 100 of them in the attack, figuring that would be enough to handle the entire American fighter force in Hawaii. In the event, nearly all the American fighters were destroyed on the ground, and only 8 Zeros were lost in the raid, mostly to anti-aircraft fire.

Over the next six months, the Zero established unquestioned Japanese air superiority. In the Philippines and the Dutch East Indies, the A6M2 took on everything from Brewster Buffalos to British Hurricanes. At Coral Sea, it demonstrated its dogfighting superiority to the US Navy F4F Wildcat. By the middle of 1942, however, the Americans began to develop effective tactics to deal with the Zero, by exploiting the plane’s weaknesses and avoiding its strengths. Chennault’s P-40s in China found that they could fly above the Zeros, dive down on them to make a rapid pass, then continue diving to run away and climb back up for another pass. The Navy adopted the “Thach Weave”, in which a pair of Wildcats would fly back and forth to cover each other’s tails.

In June 1942, the Japanese Navy lost four carriers and hundreds of planes and pilots at Midway, a blow which crippled it for the rest of the war. During the battle, a Zero fighter crash-landed in one of the Aleutian Islands and was found by the Americans, giving them their first close look at the fabled fighter. Within months, new fighters like the F6F Hellcat and F4U Corsair appeared, which were specifically designed to beat the Zero. Although the Japanese made some improvements in the A6M5 model, and designed a number of very capable fighter planes to replace the Zero, their inferior industrial base was never able to keep up with the war’s demands, especially after B-29s began their systematic bombing campaign. Though outclassed, the Zero remained in production until the end of the war, with almost 11,000 built in various models–over half of these by the Nakajima company. Its final role was as the favored plane for kamikaze suicide attacks on American carriers.

Nearly all of the remaining Japanese Zeros were destroyed by the occupying Allies after the end of the war. Today only a little over a dozen survive, many of them being crashed airplanes that were recovered and restored.

In April 1944, US Marines captured a group of 12 intact A6M5 Zeros on Saipan. They were shipped back to the US for technical evaluation. One of them was sent to the Navy test facility at Eglin, Florida, for evaluation flights, then to Wright Airfield in Dayton, Ohio. In 1974 the Zero was restored by the Smithsonian, painted in the markings of the 261st Naval Air Corps stationed at Saipan, and is now on display at the Air and Space Museum.