The double-decker bus is an iconic symbol of London, just as recognizable as Big Ben or the Tower Bridge. 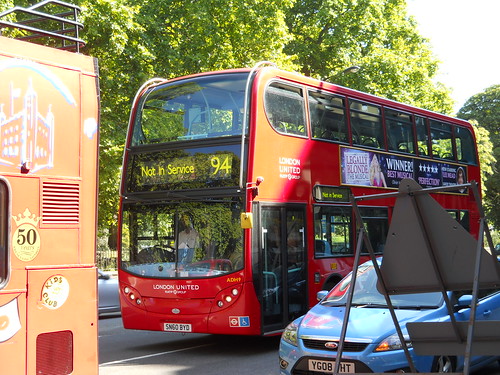 Horse-drawn carriages and carts were a convenient mode of transportation for the aristocracies in France and England since medieval times. But in the first decades of the 19th century, as European economies became more urbanized and the populations of Paris and London began to swell, the need appeared for a cheap and effective method of transporting the masses of factory workers to and from their jobs. So in the 1820’s large carriages known “omnibuses”, capable of carrying many passengers at a time, appeared. These were horse-drawn. Over time, these got larger and larger and could carry an ever-increasing number of people. The London General Omnibus Company was the first to introduce a regular schedule with fixed routes.

Then, in 1847, the Adams And Company of Fairfield hit on a clever way to double the number of passengers without increasing the length of the bus–they added an open-air upper deck, accessed by a ladder, with a number of bench seats that ran along the sides. The first bus company to use them was the Economic Conveyance Company. Although the passengers did not like being exposed to London’s famously chilly and rainy weather, the tickets for the upper deckwere only half-fare–an important consideration for the city’s working poor.

The idea was then improved upon by John Greenwood, who introduced a new double-decker in 1852. Greenwood made his bus larger; it could hold 42 people and required a team of three horses to pull it. Soon several different companies were running lines of double-decker horse-drawn buses all across the city of London. More improvements followed: the long benches were replaced by forward-facing seats, and a stairway was added to give access to the upper deck, making ladders unnecessary.

But by the 1880’s the horse-drawn bus was facing competition from two directions. In Berlin, the era of state-run public transportation had begun, as the city installed a network of trams that were driven by electric motors. These could carry a larger number of people and were cheaper to run and to ride. And the gasoline internal combustion engine was changing the face of transportation. In 1898, the Daimler Company introduced the first motor-driven bus, in Berlin, with a top speed of 12 mph. By the end of World War One, the horse-drawn vehicle was obsolete. The last horse “omnibus” in London closed down in 1914.

The city of London installed its own electric tram system too, but didn’t give up on the double-decker bus. In 1923 the new Type NS bus was introduced, manufactured by the Associated Equipment Company (AEC). The upper deck was now enclosed to protect it from the weather, and the wooden benches were replaced with upholstered seats. The NS bus was enormously popular. Although it ceased manufacture in 1937, the NS remained in service through World War Two and into the 1950s.

In 1949, the Bristol Commercial Vehicles (BCV) company introduced the Lodekka. This was a bit smaller than the NS (to allow it to pass under the many bridges and overpasses in the city). The Lodekka remained in service until 1968.

Its replacement was the Routemaster, introduced in 1956. At the time, the Routemaster was a revolutionary design. Most city buses were built from metal bodies attached to steel “ladder” chassis, but the Routemaster was made using an aluminum-alloy shell to which two “sub-chassis” were attached at the front and rear. This made it lighter and more fuel-efficient. It also had advanced features like an automatic transmission, power steering and brakes, and independent suspension. Painted bright red, London’s double-decker buses became a familiar icon.

The Routemaster continued in service for half a century, undergoing a number of modifications. The gasoline engine was replaced by diesel (and later by a hybrid electric). While other cities expanded their public transportation capacity with articulated double-buses (two coaches connected by a flexible joint in the middle), these were not suited for London’s narrow streets and sharp corners, so the double-decker was kept instead.The last Routemaster was retired in 2005.

After the London bus system was privatized, a number of different line began to run double-deckers manufactured by different companies, although they all keep the iconic red color. Today, a number of companies run sightseeing buses for tourists–they have reverted to the early open-air upper deck to give sightseers a better view. And the concept has now been exported to the US, where double-decker sightseeing buses can now be found in cities like Los Angeles, Washington DC and New York.