The F-82 Twin Mustang is certainly one of the oddest aircraft ever produced–it looks like something that a ten-year-old would make out of spare model kit parts. But the F-82 still holds some flight records for a piston-engined fighter, and it was an F-82 that scored the first American air victory in Korea. 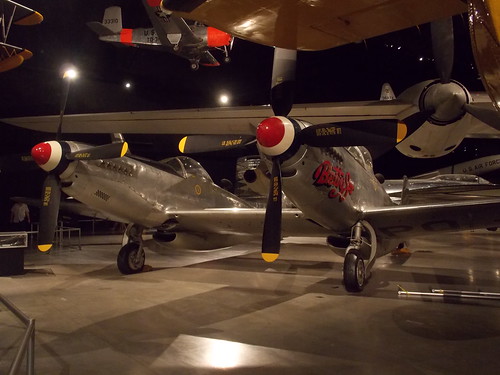 Until the D-Day invasion of Europe in June 1944, the only method the Allies had to strike against Germany was long-range bombing from bases in England. The British Lancasters flew mostly at night, but the American B-17s flew during the day, and suffered heavy losses from Luftwaffe fighters. It wasn’t until the P-51 Mustang fighter was introduced, with sufficient range to escort the bombers all the way to Germany and back, that the threat of German fighters was effectively dealt with.

In the Pacific, however, the new B-29 bomber had a far greater range than the B-17, sufficient to strike targets in Japan from Guam and Saipan. Neither the P-51 nor the P-38 fighter had the range to accompany the B-29s that far, so in 1943, work was begun on designing a new “VLR” (Very Long Range) escort fighter. Two challenges needed to be met: because these long-range escort missions could last over 12 hours, the plane needed to be multi-crew, and it needed sufficient internal room to carry enough fuel for the long trip.

It was decided that a twin-fuselage configuration, essentially two airplanes joined together to form one, would solve both problems. Fuel tanks could be fitted into both fuselages, and having two functional cockpits would allow the pilots to trade off during long flights. So the designers took two P-51 fuselages, lengthened them by about five feet (to add new fuel tanks behind the seats), connected them together with a central wing (which also held a fuel tank), and strengthened the outer wings to carry bombs, rockets, and external drop tanks. The result was the F-82 Twin Mustang. The prototype made its first test flight in June 1945. World War Two ended two months later.

But now the F-82 had a new mission. As the Cold War began, the Air Force envisioned strikes being flown by B-29s, B-50s or B-36s to deliver nuclear weapons to targets in the Soviet Union, and only the F-82 had the range to accompany them, at least until the new long-range jet fighters being developed were ready. In the immediate post-war years, the Twin Mustang became the standard American long-range fighter. To demonstrate the plane’s capabilities, in February 1947 an F-82 named “Betty Jo”, fitted with four drop tanks and piloted by Col. Robert Thacker, flew nonstop from Oahu, Hawaii, to  New York, a little over 5,000 miles away. It remains the longest unrefueled flight ever made by an Air Force piston-engined fighter.

By now the jet age had begun, and the F-82, as the last piston-engined American fighter, was becoming an outdated relic. Shortly before the outbreak of the Korean War, however, the F-82 found itself assigned to a new role. The Soviets were producing their own long-range bombers capable of reaching the United States with nuclear weapons. Although the Air Force had new jet fighters to intercept Soviet bombers, these could not operate at night. About 180 twin-fuselaged F-82s were now modified as night fighters: their spacious gas tanks were replaced with heavy electronics and radar sets, and one of the cockpits was altered to serve as a radar operator station.

When North Korean troops poured over the border into South Korea on June 24, 1950, the 45 F-82s based in Japan became the first American fighters to respond to the attack, flying reconnaissance, weather and patrol missions. On June 27, a patrol of Twin Mustangs over Kimpo Airfield was jumped by a flight of five Soviet-made North Korean fighters, and in the ensuing combat, Lieutenant William “Skeeter” Hudson shot down a Yakovlev Yak-11, giving him the first air victory in the Korean War. In that same fight, two other North Korean fighters, both of them Lavochkin La-7s, were also shot down.

As F-80 Shooting Star jet fighters began arriving in Korea, the F-82s were reduced to ground attack missions, and then weather reconnaissance. By 1953, nearly all of the remaining Twin Mustangs were withdrawn to Alaska for patrol duty. By the end of the year they had all been removed from active service. Of the 272 that were manufactured, only five still remain today.

After being retired from the Air Force, the record-setting F-82 “Betty Jo” was assigned as a test plane to the National Advisory Committee for Aeronautics (NACA), the forerunner to NASA. The “Betty Jo” was donated to the US Air Force Museum in Dayton OH in 1957, where she is currently on display.

The Air Force Museum also has a second F-82 on display, painted in the markings of the night-fighter flown by First Lieutenant Charles Moran when he shot down a North Korean La-7 during the combat on June 27, 1950. 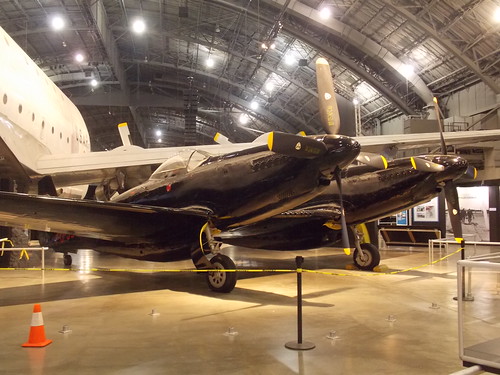 3 thoughts on “Icons of Aviation History: The F-82 Twin Mustang”