Billy the Kid is one of the most famous outlaws of the Old West. But his story has mostly been exaggerated. For at least part of the time he was actually a deputized lawman. And he may have been granted a pardon by the Governor of New Mexico in exchange for cooperating with law enforcement. 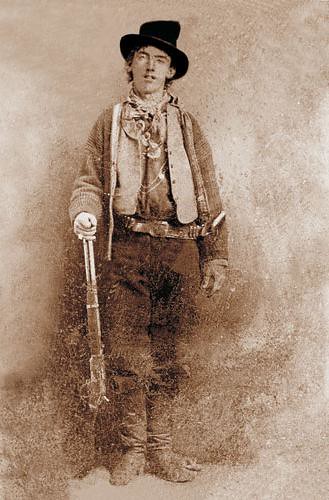 Not much is known about the early life of Billy the Kid. He always told people that he had been born in New York, and this is confirmed by a birth record of “William Henry McCarty” on September 17, 1859. His mother’s name was Catherine, who arrived in the US from Ireland with her husband Patrick McCarty. In 1864, Patrick McCarty died, and Catherine shortly later moved in with (and later married) a man named William Antrim. To avoid confusion with the two “Williams”, the young boy William began to be referred to by his middle name, “Henry”.

In 1870, Catherine, Antrim, young Henry and his younger half-brother Joseph moved to Kansas. When Catherine was diagnosed with tuberculosis, the family moved to Colorado and then to Silver City, New Mexico, where they hoped the hot dry weather would help her health. But in 1874, Catherine died, and William Antrim placed the two boys in foster care and departed for Arizona.

Left to fend for himself, young Henry McCarty fell in with a local desperado called Sombrero Jack, and made a living by petty theft. When Henry was caught with a bundle of stolen laundry, he was arrested, but escaped by climbing up the jail’s chimney, and ran to one of his former foster families, who gave him some money and put him on a stagecoach to Arizona. There, Henry, about 16 years old, was taken in by another outlaw, a thief named John Mackie. They made a living by stealing horses from the nearby US Army outpost.

In August 1877, Henry McCarty, now using the name “Henry Antrim” and already known, from his short stature and slight build, as “The Kid”, got into a fight with a local blacksmith named Windy Cahill, managed to pull out his pistol, and shot him. Now facing murder charges, the teen fled to New Mexico. There, he was taken in by a group of ruffians who called themselves “The Boys”, and moved along with them to Lincoln County.

At this time, Lincoln County was run, in the absence of any effective government or law enforcement, by a man named James Dolan, an Irishman who owned the only store in the county (and controlled most of the other businesses as well), hired and fired sheriffs as if they were employees, and, on the side, did some work as a cattle rustler and horse thief. At about the same time as young Henry Antrim and “The Boys” arrived (to work for Dolan and his syndicate), a British immigrant named John Tunstall arrived in town, with a sum of money he had brought from England. Tunstall’s intention was to open his own businesses and eventually take over the de facto county government from Dolan. It was the beginning of what became known as “The Lincoln County War”.

Although “The Boys” were working for Dolan, Henry Antrim had a falling out with them, and left to join Tunstall as a ranch hand. It was at this time that Henry Antrim began using the name “William Henry Bonney”. Given that both camps were surrounding themselves with hired gunslingers, an armed conflict was inevitable. It came on February 18, 1878, when an armed posse, deputized by Dolan’s appointed Sheriff William Brady, met with Tunstall on the road and, without warning, shot him off his horse.  The next day, the local Constable, Richard Brewer, deputized Bonney and other members of the Tunstall gang, and issued an arrest warrant for the Dolan gang members who had killed Tunstall. For the next two years, the Lincoln County War was now an actual war, with two gangs of armed thugs each acting in the name of the law. After Turnstall’s death, his supporters became known as “The Regulators”, and William Bonney took over leadership, and became widely known as “Billy the Kid”. In a long series of raids, gunfights and ambushes, 22 men on both sides were killed, including Sheriff Brady.

In 1879, the two gangs reached an uneasy truce. But now a new Territorial Governor, former Union Army General Lew Wallace, moved in to attempt to end the bloodshed. The Governor offered an amnesty to everyone on both sides, as long as they were not currently under indictment. Billy the Kid was under a number of indictments (one for the murder of Sheriff Brady), but he sent a message to the Governor’s office that he would testify on behalf of the state if he were also granted amnesty. In March 1879 the two met in Santa Fe to work out the deal. The Governor agreed to a full pardon in exchange for the Kid’s testimony. As part of the agreement, Bonney agreed to be held in the local jail until after his testimony, when he would be released.

Things didn’t turn out that way. After Bonney testified to a grand jury, the local District Attorney, contrary to the Governor’s agreement, refused to release him and planned to prosecute him for several murders. Thinking he had been double-crossed by the Governor, Billy the Kid escaped from the jail and fled to the Mexican border region. The Governor placed a $500 bounty on his head. After another shootout in which a Deputy Sheriff was killed, Billy and most of his gang were captured in December 1880 by Sheriff Pat Garrett, who had known Billy the Kid earlier. The Kid was taken to Sante Fe and convicted at trial of murdering Lincoln County Sheriff Brady. He was sentenced to be hanged on May 13, and was transported to Lincoln County for his execution.

In the afternoon of April 28, 1881, Billy the Kid was being held in the upper floor of the courthouse by Deputy Sheriff James Bell and Deputy Sheriff Robert Olinger, who had been amusing himself by taunting the Kid. Shortly after Deputy Olinger left to have lunch in the saloon across the street, Billy the Kid asked Deputy Bell to take him to the outhouse. As they climbed the steps to return to the jail cell, the Kid shot Bell, who died instantly. According to legend, a sympathizer had stashed a gun for him inside the outhouse; according to the story that Billy the Kid himself told others, he had managed to get one of his hands out of his cuffs, pulled one of Bell’s own pistols, and shot him with it.

Across the street, Deputy Olinger heard the shot and ran outside. Billy was in the second floor window, holding Olinger’s own shotgun, which he had left behind. “Hello, Bob”, he said, and pulled both barrels. Olinger fell dead. Billy the Kid mounted a nearby horse and rode off. He was now the most-wanted man in New Mexico.

It took two months for Sheriff Pat Garrett to track Billy’s whereabouts. On the night of July 14, 1881, Garrett went to the home of one of Billy’s Mexican girlfriends. What happened next is unclear. According to Garrett’s account, he was already there, talking to an acquaintance named Peter Maxwell to find out where Billy was when the Kid himself unexpectedly walked through the door. Seeing someone in the dark room, Billy asked in Spanish “Who is it?” and pulled a pistol and a knife, whereupon Garrett drew his own gun and shot him in the chest. In another version put forth by some historians, Garrett already knew the Kid would be there that night and was waiting in ambush, and when Billy entered the room on his way to the kitchen, Garrett shot him without warning.

In the popular legend, Billy the Kid was credited with killing 21 men, “one for each year of his life”. In reality, most of those were gang shootouts in which he probably did not fire the fatal shots, but was charged with the murder anyway as part of the gang. Most historians conclude that Billy the Kid himself probably killed only four people–two of those in bar fights, and two of them being the deputies shot during his escape.

There is only one authenticated photo of Billy the Kid, showing him with a rifle and pistol. Based on the photo, in which the revolver holster is at his left hip, it was long believed that the Kid was left-handed. It wasn’t until the 1980’s that somebody noticed that the loading port on the lever-action rifle in the photo was depicted on the wrong side, and that it was a tintype photo, which produces a mirror image. Properly reversed, the photo would show the pistol on the right hip, making Billy the Kid right-handed after all.

The story of Billy the Kid took a modern turn in 2010, when New Mexico Governor Bill Richardson, a fan of Western history, announced that he was investigating the possibility of fulfilling the offer of amnesty that Territorial Governor Wallace had agreed to in 1879, and might issue a posthumous pardon to Billy the Kid. On his last day in office, however, Richardson announced that although it seemed certain that Wallace had agreed to issue an amnesty, the Kid’s actions afterwards, including killing two Deputy Sheriffs in his escape, precluded the possibility of a posthumous pardon