In 1919, the US Navy seaplane NC-4 became the first aircraft to fly across the Atlantic Ocean, in a multi-plane mission that very nearly became a disaster. 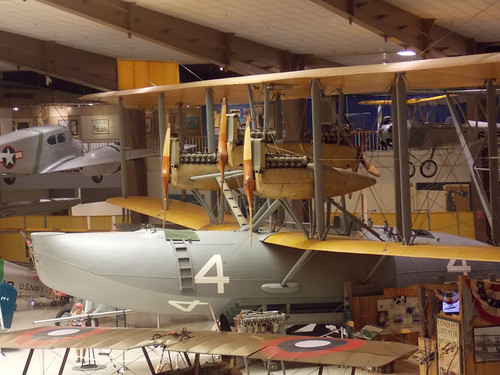 In 1913, the London Daily Mail offered a prize of 10,000 pounds to the first airplane pilot to fly from North America to Europe, within 72 hours, across the Atlantic. At this time, it had only been ten years since the Wright brothers flew for 120 feet, and a trans-Atlantic flight was not even remotely possible.

But the outbreak of the First World War in 1914 provoked rapid advancements in aircraft technology. By 1916, multi-engine bombers were routinely traveling between Germany and England. In 1917, the United States entered the war, and the US Navy began drawing up plans for a number of “flying boats”, large aircraft that used floats to take off and land on water, which would be capable of flying all the way across the Atlantic to search for German U-boats and protect the supply convoys sailing for England. These would be built by the Curtiss Aircraft Company, which already had experience producing seaplanes for the Navy; they were designated NC (for “Navy/Curtiss”) 1, 2, 3 and 4, but were christened “Nancys” by those who worked with them. As designed, they were to have a crew of six, a hull measuring 45 feet long at the waterline, a wingspan of 126 feet, and would be powered by three 400-horsepower V-12 Liberty engines, mounted on a network of struts just behind the wing, above the cockpit. NC-1 made her first flight on October 4, 1918. A month later, on November 11, Germany surrendered and the First World War ended.

But the NC project was continued, motivated now by a proposal submitted by US Navy Commander John Towers, suggesting that the seaplanes be used to achieve the first trans-Atlantic flight as a way of winning prestige for the United States (the flight would not be able to win the Daily Mail’s prize because the flying boats were too slow to cover the distance within 72 hours). A prominent supporter of the plan was Assistant Secretary of the Navy (and future US President) Franklin Delano Roosevelt. The project was designated “NC-TA”. On November 25, the newly-completed NC-1 made a test flight in which she carried 51 people inside her hull, the largest payload carried by any aircraft up to that time. But, the Navy decided, she was underpowered for a reliable trans-Atlantic flight, and the NC-TA project was put on hold until a fourth Liberty engine could be added. This was mounted with a series of braces behind the other three engines, facing backwards in a “pusher” configuration. This arrangement was able to drive the NC-1 at a top speed of about 90mph; at cruising speed of 75mph, the seaplane could fly for some 15 hours. The same change was made to NC-3 and NC-4, which were still undergoing construction. As an experiment, NC-2, also still being built, was modified to have all four engines facing forward, in two pairs above the cockpit.

All four NCs were finished by the end of April 1919, and plans were made to launch them across the Atlantic in May. Initial flight tests, however, immediately demonstrated that the “four up front” engine configuration in the NC-2 caused problems with balance, and when the NC-1 suffered some damage during a hangar fire on May 5, it was decided to ground the NC-2 and cannibalize her for repair parts.

On the way, the NC-4 had engine trouble and had to land on the sea and cruise to the Navy base in Chatham MA for repairs. The NC-1 and NC-3, meanwhile, both suffered cracked propellers and had to spend a day in Halifax replacing them. By May 10, the NC-1 and NC-3 were in Trepassey, Newfoundland, where the official trans-Atlantic flight was to begin. The NC-4 was still in Massachusetts having her engines repaired. The Navy had arranged for a string of 21 destroyers, 50 miles apart, to stretch all the way across the Atlantic along the planned flight path, both as navigational aids and to rescue any planes that had to ditch. The “Nancys” were to fly all the way to the Azores, stop for refueling, and then go on to Portugal. But now the flight was delayed by bad weather. By the time it cleared, the NC-4 had rejoined the others in Trepassy. All three seaplanes took off across the Atlantic on May 16, launching just before nightfall so they could reach the Azores for a daylight landing. To avoid the possibility of colliding in the dark, each of the three planes flew separately from the others.

The flights went well until morning, when they were each approaching the Azores. A heavy fog rolled in, which was at times so thick that the pilots couldn’t see their own wingtips. In the NC-1, pilot Bellinger couldn’t find the string of destroyers in the fog and, running low on fuel, decided to put down on the sea and wait for the fog to lift so he could get some navigational bearings. But although he was able to land safely, the NC-1 was buffeted by 12-foot waves that prevented her from taking off again. Luckily, a Greek freighter happened to be nearby and picked up Lt Commander Bellinger and his crew. The Navy sent some ships to try and tow the NC-1 to safety, but this was prevented by the high waves, and after three days of pounding, the NC-1 broke apart and sank.

The NC-3, meanwhile, had also gotten lost. In the fog, Commander Towers had mistaken a British Navy cruiser for one of the American destroyers, and was drawn far off-course. When his fuel ran low, Towers also touched down onto the Atlantic, but the rough seas broke several of the plane’s engine struts. The NC-3 could no longer take off, and was now a boat. It took two days for the NC-3 to sail the 200 miles to port.

The NC-4, meanwhile, had been able to follow the line of destroyers and reach the Azores, but was also low on fuel and fighting a thick fog when pilot Read set her down at the port in Horta. Of the three seaplanes, his was the only one still flying.

The NC-4 remained stuck in Horta for three more days until the weather cleared, then flew for Portugal, but suffered engine trouble and had to land after just 150 miles at Ponta Delgada. From there, another line of US Navy destroyers would guide her to the end of the trans-Atlantic flight in Lisbon. Once again, the weather caused delays, and it wasn’t until May 27 that Read was able to once again take off. Twelve hours later, the NC-4 settled into Lisbon’s harbor on the Tagus Estuary. The trans-Atlantic flight had taken almost three weeks, due mostly to weather delays. She had been actually in the air for 26 hours and 46 minutes.

The Navy, despite the difficulties during the flight, was happy with the long-range performance of the seaplanes, and built six more NC’s, using them for anti-submarine and coastal patrols until 1922.

After her landing in Portugal, the NC-4 flew to England (after spending a night in Spain to fix a malfunctioning engine) and returned to the US by ship. After making a flying tour of the US ending at St Louis, the Navy put the seaplane on display at several places, including New York City’s Central Park, before donating her to the Smithsonian, where she lay in storage until she was exhibited for the 1969 50th anniversary of her flight. In 1974 the NC-4 was loaned to the US Navy’s National Museum of Naval Aviation in Pensacola FL, where she remains on display.