It may be the most famous battle of the Revolutionary War. But the Battle of Bunker Hill did not happen the way most Americans today think it did. It didn’t even happen on Bunker Hill. And it was the British who won the fight. 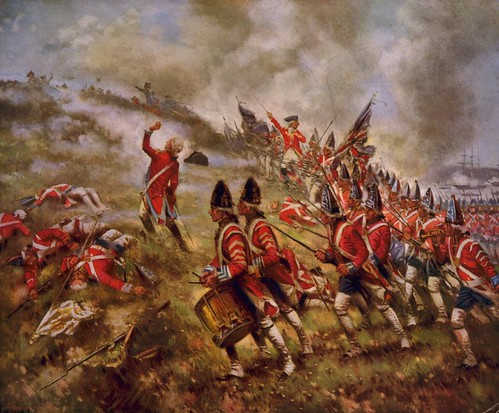 When the American Revolution began with the battles at Lexington and Concord, the bulk of the British Army was garrisoned in the city of Boston. The English government, hoping to quell the rebellion quickly, dispatched three Generals, Clinton, Burgoyne and Howe, along with additional troops, from London to reinforce General Gage in Boston. They arrived in early June 1775.

While Boston was surrounded by towns filled with rebellious militia, the city itself was controlled by the British Navy. The only potential danger lay in the possibility that the colonial rebels might get cannons into position on some of the hills surrounding Boston, allowing them to shell the British ships in the harbor. To prevent that from happening, the British made plans to send troops to occupy the hills.

Through sympathetic civilians, the colonial militia commanders heard about the plan. To counter it, the rebel commander General Israel Putnam ordered Colonel William Prescott to take a force of about 1,000 Massachusetts and Connecticut militiamen and fortify Bunker Hill, which overlooked the harbor. Somehow, though, the colonial force ended up instead on Breed’s Hill, about 600 yards away–perhaps because Prescott thought it would be easier to defend, perhaps because they simply went to the wrong hill. In any case, the colonials spent the night of June 16 digging trenches and building stone and log breastworks on the crest of Breed’s Hill. At daybreak, the British ship HMS Lively saw the fortifications and opened fire on them; within an hour most of the other warships in the harbor had joined in the bombardment. But by this time the Americans had already finished their trenches, and the cannonade had little effect.

It fell to the British General Howe to remove the rebels. He went ashore with 2,500 troops at about 3pm on June 17. The Americans had about 1,000 militiamen on Breed’s Hill; there were several hundred more on nearby Bunker Hill, but most of them refused to advance after the British landing.

Howe probably thought his task would be easy. The American militia were an undisciplined rabble, and his English regulars were the best army in the world–and they outnumbered the militiamen almost three to one. With a direct assault up the hill, Howe concluded, the colonials would break and run away, and the rebellion would be over. With supreme overconfidence, he formed his troops into an extended line, and ordered them to charge.

At the top of the hill, the Americans waited and watched as the red-coated British slowly came up the hill. According to legend, Colonel Prescott had issued the order “Don’t shoot until you can see the whites of their eyes.” The British troops were only 50 yards away when the colonials opened fire. The effect was devestating: huge holes were ripped in the British ranks, and the entire line faltered, then staggered back down the hill. Dead redcoats lay everywhere. Howe hastily reorganized his troops, formed them into another line–and sent them back up the hill. Again the colonials opened fire at short range, and again the British dropped by the dozens and retreated. Howe was shocked; he had not expected an actual fight with the rebels.

He now ordered his artillery into action, and for some time, British cannon raked the Americans with cannisters of grapeshot. And then, for the third time, the British troops were sent up Breed’s Hill. By this time, however, the colonial militiamen were running out of powder and ammunition. The redcoats made it to the top of the hill with bayonets fixed, and after a few minutes of brutal hand-to-hand fighting, the Americans, outnumbered and out of ammo, broke and ran. The British, who had lost almost half of their troops killed or wounded, did not pursue them. The entire battle had lasted about two hours.

It was, technically, a British victory; the redcoats had driven their enemy off the battlefield and they stood in possession of the high ground. But it had been purchased at an unacceptably high cost, and the Americans had demonstrated an unexpected willingness to not only stand and fight, but to do so effectively. There would be no quick win here; the American insurgency would become a long bloody quagmire for the British.

Less than a year later, the American General Washington, using British cannon that he had captured from Fort Ticonderoga, once again occupied a series of hills around Boston. The British General Howe, surrounded by hostile civilians and cannons, abandoned the city, and withdrew his command post all the way to Canada.