The Hollywood Walk of Fame is one of the best-known landmarks in California. Each day, thousands of tourists can be seen searching the sidewalks of Hollywood Boulevard for the star honoring their favorite actor or singer and posing for a souvenir photo. 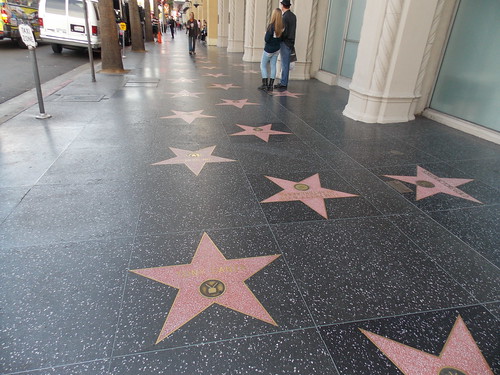 During the golden years of the silent film era and the first few years of the “talkies”, Hollywood CA was the center of the motion picture industry. Charlie Chaplin’s studio could be found at LaBrea, and other film companies were gathered at Hollywood Blvd and Vine St.

But in the 30’s and 40’s, things began to change. The major movie studios relocated to downtown Los Angeles. The city of Hollywood fell on hard times and began a slow decline; by 1950, it was a seedy area of poverty and street people.

In 1953, the Hollywood Chamber of Commerce was looking for ways to upgrade the city’s image, and began a project called the “Hollywood Improvement Association” to give the city a facelift. And, to draw in more tourism, the Chamber’s president, EM “Mac” Stuart, proposed the idea of a “Walk of Fame”, where entertainment celebrities would be honored with a marker.

The original design for the marker consisted of a blue granite star with the celebrity’s name carved into it, set into a square of brown stone. The markers would be permanently embedded into the sidewalk . As it turned out, it was too difficult to obtain blue-colored stone, so a new design was made up by artist Oliver Weismuller. This consisted of a five-pointed star made from pink stone rimmed with bronze, set into a square of grey granite. Bronze letters are inlaid into the star to spell out the celebrity’s name, and a small bronze plaque symbolizes the area of entertainment for which the celebrity is being honored: a movie camera for film stars, a TV set for television stars, a record for music stars, a microphone for radio stars, and comedy/tragedy masks for stage actors.

The Chamber of Commerce then formed a “Walk of Fame Committee” (including Cecil B DeMille, Walt Disney and Sam Goldwyn) to select the celebrities who would be honored with a star. About 1,500 markers were planned.

The project was then delayed by two lawsuits. To pay for the proposed project, a special tax, totaling $1.25 million, was assessed by the city to all the businesses located along the Hollywood Boulevard sidewalk where the markers would be placed. Several of these objected and filed suit. Another lawsuit was filed by Charles Chaplin Jr, the son of the legendary silent film actor–his suit charged that the selection committee had unfairly excluded his father from the list due to political considerations (McCarthyism was now raging against Hollywood, and Chaplin had been a prominent leftist). Both of these lawsuits ended in 1959. (And Charlie Chaplin finally got his star in 1972.)

During this time a new office building was being constructed at the corner of Hollywood Boulevard and Highland, and it was decided to put in a temporary group of Walk of Fame markers into the new sidewalk, to show what the eventual display would look like and to generate publicity for the project. So eight stars were unveiled there on August 15, 1958. These markers were for Olive Borden, Ronald Coleman, Louise Fazenda, Preston Foster, Burt Lancaster, Edward Sedgwick, Ernest Torrence, and Joanne Woodward. Because of scheduling conflicts, only Woodward was able to attend the ceremony. In February 1960, the permanent stars began to be added to the existing sidewalks on Hollywood Boulevard and Vine Street. The first star to be installed was for movie director Stanley Kramer; Joanne Woodward had the first public ceremony when her permanent star was installed shortly after that.  By the end of 1961, a total of 1558 stars were installed, and the dedication ceremonies had become glitzy Hollywood publicity events.

Since then, new stars have been added at the rate of 25-30 a year. As of 2015 there are about 2330 markers on the Hall of Fame. About ten million people a year visit the site.

A few of the Walk of Fame markers are unique. The crew of the Apollo 11 moon landing were each given stars honoring them for the most widely-watched television broadcast in history; instead of being marked with a TV set, they have a bronze portrait of the moon. Boxer Muhammad Ali’s star is the only one not set into the sidewalk; it is mounted on the wall of a nearby building because he didn’t want people to be walking on it. Television broadcaster Larry King’s star contains an error: it is mistakenly marked with a film camera instead of a TV set. Two California Governors have stars, Ronald Reagan and Arnold Schwarzenegger, both for their acting work prior to taking office. There are also stars for entertainers who later became a US Senator (George Murphy) and a US Representative (Sonny Bono and Helen Gahagan).

The Hall of Fame Committee continues to select new honorees each year. Celebrities who are chosen must agree to attend the dedication ceremony, and must also pay a fee of $30,000 to a trust fund that has been set up to maintain the markers. For the first few years, celebrities were often selected to receive second or third stars on the Walk of Fame, honoring them for contributions in a different area of entertainment. Since then, this has been discontinued. Only one celebrity, Gene Autry, has received a star for each of the five entertainment categories.

6 thoughts on “History of the Hollywood Walk of Fame”