Today, the oil industry is one of the largest and richest in the world. Vast fortunes are made by oil, countries are governed by it, ecosystems are destroyed by it. And it all began in a little town in northwestern Pennsylvania. 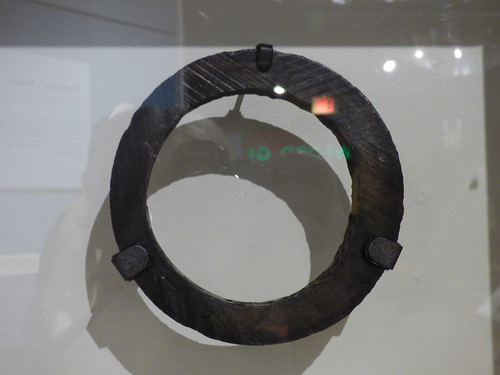 Section of drill pipe from the first oil well, on display at the Heinz History Center, Pittsburgh

In the first half of the 19th century, the United States, along with most of Europe, was undergoing an economic revolution. The agricultural economy that had dominated life for 10,000 years was being replaced by a new manufacturing economy. The “Industrial Revolution” produced wealth on a scale that had never been seen before, and created an entire “middle class” of shopkeepers and managers who had something most people had never had before–a disposable income. And with their new income, the rising middle classes were able to afford luxuries that only the aristocracy had been able to obtain previously.

One of these new luxuries was the lighted house. For centuries, the feudal peasantry had lived, literally, in darkness. The only widely-available source of indoors light were candles, and these were expensive and didn’t work very well. The Industrial Revolution, however, introduced something new–the mass-produced oil lamp. These were able to light a room far better (and more safely) than candles. The only available source of oil, however, was whale oil, extracted at sea by a (mostly American) fleet that spent years on a single voyage and, as often as not, returned empty-handed–and the whales were already being over-hunted to such an extent that entire species were being threatened with extinction. The demand for whale oil was far outgrowing the ability to supply it.

Chemists had already found a better fuel. For centuries, petroleum tar and raw crude oil had been seeping to the surface at various places from underground pools. These materials had been used by local people for waterproofing and lubrication, and in the early 1800’s were also being bottled and sold as quack medicines. But, when chemically distilled, crude petroleum from the ground produced “kerosene”, a liquid lamp fuel which burned more brightly than whale oil, and with less soot and odor. By the 1850’s there were already a number of commercial ventures that collected crude oil in places where it seeped to the surface and sold it as lubricating oil and as distilled kerosene.

In 1854, two lawyers from New Hampshire named George Bissell and Jonathan Eveleth formed a corporation called the Pennsylvania Rock Oil Company, in the little farming village of Titusville PA. At “Oil Creek” just outside of town, there was a natural seep where crude petroleum could be gathered in small amounts as it collected at the surface. For the next several years, they made a living by gathering 2 or 3 barrels of oil per month.

It was, however, apparent to all that this would not be enough; the only way to obtain crude oil in sufficient amounts would be to drill underground to it, rather than waiting for it seep naturally to the surface. But at the time the only drilling technology that existed was for digging water wells, and the method used to drill through soil to the water table did not work when drilling through solid rock for oil. Every company that attempted to drill down to the oil deposits, including Bissell’s, failed to reach the required depth.

Then, in 1857, Bissell met a former railroad conductor named Edwin Drake, who happened to be staying in the same hotel in Titusville. Drake owned a few shares of stock in the Rock Oil Company and had traveled to Pennsylvania from New York to visit the petroleum seeps. Bissell and Eveleth had been looking to hire someone who could travel back and forth to inspect their oil fields, which were scattered around western Pennsylvania, and Drake, who as a former railroad employee could ride the trains for free, fit the bill. More importantly, Drake also had some experience with drilling water wells. The three men formed a partnership to find a workable method of drilling for oil, and called it the Seneca Oil Company. Drake was hired as company president.

Their first well, in October 1858, was a disaster: the drill reached a depth of just 16 feet, and a worker who was using an open flame to examine it touched off an oil fire that destroyed the wooden derrick.

It was then that Drake had an idea–instead of trying to drill directly through the rock to reach the oil, he would push a hollow iron tube, called a “drive pipe”, down ahead of the drill to break up the rock layer and make it easier for the drill to penetrate. He hired a local blacksmith to make the drive pipe and drill, and to run the operation. The crude drilling apparatus managed to go down about three feet a day. When the Seneca Oil Company ran out of cash during the drilling, Drake borrowed money on his own and continued work.

On Saturday, August 27, 1859, at a depth of 69 feet, the drill bit struck an oil pocket. By the next morning, a large pool of oil had oozed to the surface. Drake’s well produced about 20 barrels a day, more than a whaling ship could bring back in an entire year. For the next 40 years, Pennsylvania would supply over half of the world’s petroleum–until even larger oilfields were discovered in Texas. The Oil Age had begun.

But the man who started it, died in poverty. Edwin Drake had never patented his “drive pipe” idea, and never received a dime from all the new oil companies that were getting rich using his invention. After the original Titusville well caught fire and burned down, Drake drilled two more wells before leaving the oil business, worked briefly as a Justice of the Peace, and died in Bethlehem PA in 1880.