When the Civil War began in 1861, both sides thought it would be over quickly. Instead, it dragged on for four long and bloody years. And one of the difficulties faced by both armies was what to do with the tens of thousands of prisoners that would be captured by each side in the course of the war. 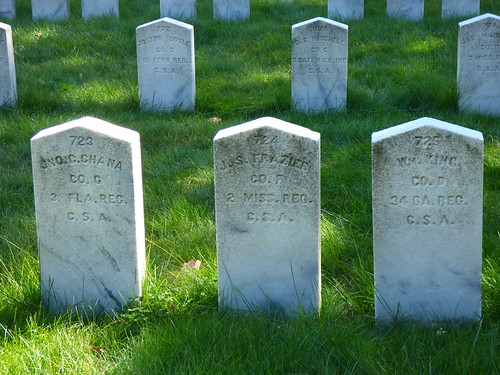 In the first years of the Civil War, both the Union and the Confederacy were unprepared, and often lacked enough resources to properly provide for their own troops, much less for taking care of captured enemy troops. As a useful expedient, therefore, both sides avoided the need to care for large numbers of prisoners by subjecting their captured enemy soldiers to “parole”, an arrangement in which the captured prisoner gave his name and residence, and was then released after signing a promise that he would stay at home and not fight again in the war. It may seem to be a shockingly naive system to us today, but it actually worked pretty well–military men of that time prided themselves on their honor, and in any case the parole was enforced by the practice of checking all new prisoners against the list of previous parolees, and if a paroled prisoner was captured again, he would be summarily executed.

To hold captured enemy officers and their own local civilians who were arrested for aiding the enemy, both sides converted military prisons into makeship POW camps. In 1861, the Confederacy held a few hundred prisoners at Salisbury Prison in North Carolina and Point Lookout in Maryland, while the Union held its Confederate prisoners at Elmyra Prison in New York and Alton Prison in Illinois.

In May 1861, the Union established a training center at Camp Chase, just outside of Columbus, Ohio, which also served as a railway transport center for dispatching Ohio troops to the rest of the country. In all, about 150,000 Union troops from various Ohio Regiments spent time in Camp Chase, including four future Presidents who served as officers in the Union Army: Andrew Johnson, Rutherford B Hayes, James Garfield, and William McKinley. By November, Camp Chase had also added a military prison, where about 300 civilian Confederate sympathizers from Kentucky and West Virginia were held.

During the first years of the war, both the Union and the Confederate Armies were all-volunteer, with each Regiment being made up of members from a particular county, town, or area. Many Volunteer Regiments were privately raised and paid for by some wealthy local town official, who then usually assumed command of the unit.

As the war dragged on, however, and losses mounted, many regiments were in the field at sometimes less than half strength, and a method was sought to replenish the ranks without resorting to the politically-undesirable option of conscription. As a result, officers from both armies would regularly meet to arrange “prisoner exchanges”, in which the paroles of a certain number of troops from each side were revoked, allowing them to once again re-join their units. (Even this, it turned out, wasn’t enough, and both the Union and the Confederacy were forced to resort to drafting conscripts–which provoked vicious draft riots.)

Because the agrarian-based Confederacy had a much smaller population than the industrialized North, the battlefield losses that it suffered had a much greater impact on the Southern armies. The Union recognized this too, and, to weaken the Confederate armies as much as possible, in 1863 they stopped the practice of “prisoner exchanges” and “paroles”, and began keeping captured Confederate prisoners as POWs for the duration of the war, a tactic which the Confederacy was then also forced to adopt.

It turned out to be a humanitarian disaster. Neither side was prepared to take care of the tens of thousands of prisoners that it was suddenly stuck with. Existing camps were expanded and new camps were hurriedly set up–the main Union POW camp was in Camp Douglas in Illinois, and the Confederates opened Camp Andersonville in Georgia. By the end of 1863, most of these camps held as many as 18,000 POWs, crowded together in unsanitary conditions and exposed in the open to the weather. Thousands died of disease and hunger. The South, crippled by the Union Navy’s economic blockade, was particularly short on resources, and with its own people on the verge of starvation, little effort was made to care for Union POWs. At Andersonville, over 45,000 Union prisoners were crammed into an open-air field fenced in with wire, with only a small running stream as a water source (which doubled as the toilet facility). Over 13,000 prisoners died in Andersonville. The North had more economic resources available to care for POWs, but didn’t have any greater inclination to do so. Camp Douglas held 18,000 Confederate prisoners, of which 4,000 died. In all, at least 56,000 POWs from both sides died in the camps–about ten percent of the total deaths in the war.

In Ohio, in the summer of 1863, about 2,000 captured Confederates, most of them from the surrendered garrison at Fort Donaldson, Tennessee, were being confined in the prison at Camp Chase. By February 1865, the POW population there had exploded to 9,400. During the course of the war, about 25,000 Confederate prisoners passed through Camp Chase, most of them on their way to another camp. A total of 2,235 of them died, many of them from a smallpox epidemic that swept through the camp in 1864. At first the dead Confederates were buried in the nearby Columbus City Cemetery, but within a short time they were being buried in an area of the camp that was set aside as a cemetery.

After the war, relatives reclaimed 126 of the Confederate remains and reburied them in their home states. At the same time, 68 dead Confederate POWs from nearby Camp Dennison and another 31 from the City Cemetery were reburied at Camp Chase. The camp was then closed, abandoned, and neglected. It’s not clear exactly how many people are now buried here: there are 2,260 gravestones currently in the cemetery, but the camp records indicate a total of 2,122 actual graves, some of them containing more than one person, for a total of 2,168 burials.

In 1893, a Civil War veteran from the Union Army named William Knauss took an interest in the old camp, and formed the Camp Chase Memorial Association to protect and maintain the Confederate cemetery and to raise funds for its preservation. A stone wall was built around the grounds and a granite memorial arch was installed in 1902, and two years later the site was purchased by the Federal Government.  In 1908, records were found which enabled individual graves to be identified, and the Commission for Marking Graves of Confederate Dead, part of the Arlington National Cemetery, paid for the installation of a headstone on each grave, lettered with the soldier’s name, rank, and unit. The vast majority are enlisted soldiers, with a scattering of corporals and sergeants, a handful of lieutenants, and a few captains. (Many captured Confederate officers were temporarily sent to Camp Chase, including General Basil W Duke, but most of the officers were then transferred to Johnson’s Island on Lake Erie.)

Today, Camp Chase is owned and maintained by the Federal Government as a National Cemetery, and is listed on the National Register of Historic Places.