What walks down stairs, alone or in pairs, and makes a slinkety sound? 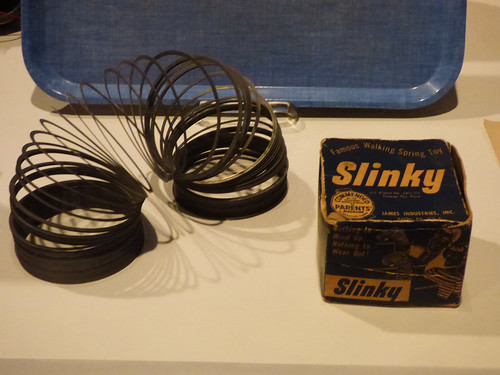 In 1943, the Second World War was raging, and most of America was either on the battle lines or serving in war-related work at home. One such person was Richard James, a marine engineer for the William Cramp Shipyard in Philadelphia. He had been assigned the task of designing an instrument that would monitor the horsepower output of Navy ships. The meter had to be held in place by a number of metal torsion springs so the pitching and rolling of a ship at sea wouldn’t effect its measurements, and James’s desktop was covered with a number of springs. As he worked, he happened to accidentally knock one of the springs off his desk, and was intrigued by the way it kept rolling when it hit the floor, in an end-over-end “walking” motion. He thought it would make a great children’s toy.

When he got home that night, he told his wife Betty about it, and she agreed. Richard began trying different versions of steel springs, testing each one out by letting the neighborhood kids play with it. He soon found one he liked, measuring 2.5 inches wide and with 98 coils made from 80 feet of flat steel wire. Betty, meanwhile, spent time searching through the dictionary for a name, and chose the word “Slinky”. Two years later, the couple borrowed $500 and hired a machine shop to produce a few hundred “Slinkys”. But when they approached a number of small area toy shops to sell them, no one was interested.

Then, just after Thanksgiving 1945, the Gimbels Department Store in Philadelphia agreed to stock 400 of the toys for the Christmas season. For several days, they sat unsold. To help sales, Richard did a live demonstration one night in the toy department, showing a group of kids how to make the Slinky “walk”–and sold all 400 toys within 90 minutes. Gimbels wanted more, and by Christmas Day they had sold 20,000 of them, at $1 each. Within a year, the Slinky was selling well enough for Richard to quit his job at the shipyard and, with Betty’s help, devote full time to making toys. He recieved the Slinky patent in January 1947, and built a factory in Albany NY, using an assembly machine he designed himself which could pop out a Slinky every five seconds. Within another year, he had sold over 100 million units in toy shops and department stores all over the US. The original plain steel coil grew to include Slinky Dogs (designed by a fan who mailed a drawing in to the company), Slinky trains, Slinky worms, plastic Slinkys, fake glasses with Slinky eyeballs, and Mini Slinkys. The company was bringing in the modern equivalent of a billion dollars a year.

Richard James’s life, however, took an odd turn when he became involved in a fundamentalist Christian religious group and began gifting large sums of money to the church; the neglected company was soon deep in debt. In 1960 he left his wife Betty and their six kids, abandoned the toy company he had founded, and hopped a plane to Bolivia to become a missionary. He died in 1974 without ever seeing his ex-wife again.

Betty, who was left to run the company on her own, moved the production plant to her hometown of Holidaysburg PA, near Altoona. She proved to have better business sense than Richard did, and over the years her sales grew steadily, thanks partly to a catchy 1962 advertising jingle that became one of the longest-running ad campaigns in TV history. By 1998, Betty had sold over 300 million Slinkys, and, at the age of 80, sold the company to toy manufacturer Poof Industries for an undisclosed amount of money that she would only describe as “a boatload”. She died in 2008 at age 90.

One of Richard James’s first production Slinky models, from 1947, is on display at the Heinz History Center in Pittsburgh PA.

One thought on “Slinky: A History”