In December 1993, the North American Free Trade Act (NAFTA) was signed into law by President Bill Clinton. The first of what would become twenty-odd regional “free trade agreements”, NAFTA was a source of controversy and conflict from its inception, with one side arguing that it promoted economic growth and helped workers in poor countries, and one side arguing that it crippled the US economy and gutted environmental and labor protections. 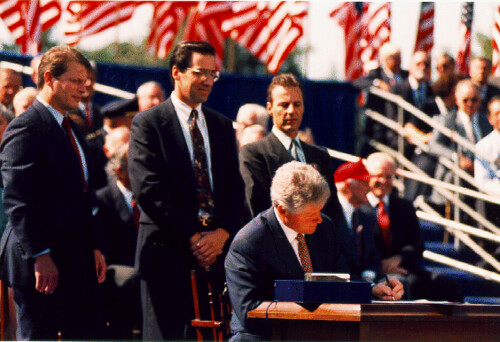 After the Second World War, the United States found itself the only industrialized nation with an intact economy, one which had not been bombed or invaded. As a result, the US enjoyed a period of prosperity in the 1950’s and 60’s that was virtually unprecedented in history. Throughout the Cold War, American products flooded the world market and brought profits from nearly every quarter of the globe, a process that became so widespread it was given its own nickname: “Coca-Colonization”.

But by the 1970’s, the bombed-out economies of Europe and Japan had not only recovered from their devastation, but had now become world economic players to rival the American corporations. The most prominent of these was Japan, whose steel, electronics and automobile companies were soon capturing increasing market share worldwide, and pushing the US companies out. Even within the US itself, Japanese products were elbowing aside the American companies. By 1979, for instance, Japanese automobiles made up 25% of the US market, and the American Big Three–GM, Ford and Chrysler–were fighting for their economic lives. All across the manufacturing sector, American corporations were caught flat-footed: they had been unchallenged at the top for so long in the post-war world that they had not made any long-term plans to beat the upstarts. Their only solution now was to call for “protectionism”, using government import quotas and trade tariffs to artificially raise the prices on Japanese and other imports, thereby allowing American companies to keep their dominant positions. In a show of labor-management cooperation, this protectionist policy was also advocated and supported by the American labor unions, including the politically-powerful United Auto Workers and United Steel Workers.

The result was a global trade war that raged throughout the 70’s and early 80’s. To get around US protectionist measures, Japanese and German companies began locating their manufacturing facilities within the US; across the globe, corporations began to strengthen their international position by buying up other companies, and large numbers of once-prominent brands were bought out or driven under by the economic warfare.

By 1980, this fratricide had convinced the global survivors that this sort of competitive warfare was fatal, and they looked for a way to end it. The policy they proposed was to drop nation-based “protectionism” in favor of global “free trade”, under which tariffs, quotas and import restrictions were to be lifted and every corporation was to be free to operate in any country, worldwide, under the same set of economic rules, thus giving no global corporation any advantage. Nation-based economies became irrelevant; national laws were rejected–all that mattered now were the global corporations, who had loyalty to no nation.

One of the first expressions of political support for the new corporate policy came during the 1979 Presidential campaign, when Ronald Reagan ran on a “free trade” platform. After Reagan was elected, the Republicans introduced, as part of the Trade and Tariff Act of 1984, a bill into Congress which authorized the US to negotiate a series of “free trade agreements”, in the form of bilateral treaties with other nations which would remove “trade barriers” and introduce “free trade” policies. In an important provision, the Act also gave the US president the legal authority to negotiate such treaties under “Fast Track”, a process in which the treaty was not only negotiated in secret, but Congress was specifically prevented from altering any terms of the final treaty, and could only give its approval or disapproval to the entire package as a whole.

Negotiations soon followed between the United States and Canada for the Canada-US Free Trade Agreement, which was signed in 1988 and took effect in 1989. The treaty removed virtually all of the trade restrictions and tariffs between the two nations. When President George HW Bush took office in 1989, negotiations began for another bilateral trade treaty with Mexico, and in 1991 Canada suggested that its treaty with the US be merged together with the upcoming Mexican deal to form a new tripartite trade agreement covering all of North America. The deal became known as the North American Free Trade Agreement (NAFTA).

For the most part, there had not been much opposition to the previous Canada-US trade agreement: both nations had similar economies, including legal protections for environment and labor, and similar wage scales. This, however, was emphatically not true of Mexico, which was a low-wage economy with few regulations on environmental protection, workplace safety, union rights, minimum wages, or product safety–and Mexico was legendary for the corruption of its government officials. In fact, as a response to this political instability, the NAFTA treaty contained a provision which removed responsibility for deciding trade disputes from the national court systems of all three countries, and placed it instead into the hands of an unelected secret tribunal, which made all its decisions behind closed doors and whose rulings could not be appealed. Any state or national law or regulation that was ruled an “unfair restriction of trade” by this tribunal would subject the offending nation to sanctions and penalties, in addition to a requirement to repay the losses of the offended industry or company.

Inside the US, the opposition to the NAFTA deal was immediate, loud, unceasing, and widespread. Labor unions argued that the agreement would cause high-paying union jobs to flee to the low-wage haven in Mexico, where there were no laws protecting worker rights. Consumer groups were concerned that product safety requirements would be ruled out by the trade tribunals as a “restriction of free trade”, leading to a flood of unsafe and unregulated products. Environmental groups feared that laws for preventing pollution and wildlife protection would be similarly ended. Even right-wing nationalists like Pat Buchanan opposed NAFTA, arguing that the secret trade tribunals were a surrender of American sovereignty. The constellation of opposition to NAFTA, from one end of the political spectrum to the other, was unprecedented. One protest sign joyously put it, “Turtles and Teamsters–Together at Last”.

In the 1992 elections, both the Republican candidate, George HW Bush, and the Democratic candidate, Bill Clinton, were enthusiastic supporters of the still-being-negotiated NAFTA treaty. But the flood of opposition insured that the deal would become a campaign issue anyway, and independent candidate H Ross Perot famously remarked, during a debate, that NAFTA would lead to a “giant sucking sound” as jobs left the US for the low-wage factories in Mexico. As a result of the political controversy, two side provisions were added to the NAFTA agreement, one covering labor rights, and the other covering environmental protections. (Both were weak and have not been well-enforced.) The NAFTA package was concluded by the US, Canada and Mexico in 1992 and was signed into law by President Clinton in 1993.

In 2008, NAFTA again became a campaign issue, as both Democratic candidates, Senator Hillary Clinton and Senator Barack Obama, announced that they supported re-opening the NAFTA treaty to strengthen its protections for labor and environment. Some forces in the Republican Party also continued to attack NAFTA as an infringement on American sovereignty and as an internationalist institution, which they found ideologically repugnant. But despite all the talk, neither party has made any move to alter any of the terms of the NAFTA agreement, or to incorporate strong labor/environmental protections into any of the subsequent trade treaties.

In the decades since 1992, NAFTA has served as the model for over twenty other regional free trade agreements between the US and various areas (all of them made in secret), culminating in the establishment of the World Trade Organization in 1996 and the current negotiations for the Trans-Pacific Partnership (TPP) free-trade treaty. Nearly all of the provisions in the TPP are based on those in the already-existing NAFTA and other regional trade treaties.

Ironically, most of the arguments made in 1992 against NAFTA turned out to be wrong–but in an unexpected way. While there was an initial move by American corporations to relocate their high-wage union factories to the unregulated low-wage Mexican maquiladora sector, that move quickly died out, and the factories that were supposed to bring prosperity and jobs to Mexican workers never appeared in large numbers. They went to China instead.

One thought on “A History of NAFTA”