In the 16th century, European Christianity entered the Empire of Japan. It became such a threat to the social order that it was outlawed, Japanese Christians were massacred, and Japan closed itself off to the West for the next two and a half centuries. 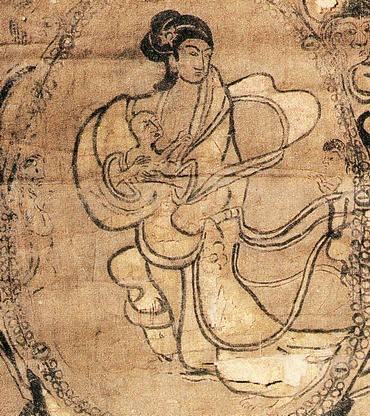 In the 15th and 16th Centuries, Japan was a feudal society, based on rice agriculture. While the titular head of state was the Emperor in Edo (modern-day Tokyo), actual political power rested with the various daimyo, or regional warlords, who sent their samurai armies against each other, each hoping to become the predominant unchallenged power in the country. The period became known as the Sengoku, or “Country at War”.

In the midst of this period of unceasing civil war, the Europeans first arrived in Japan, in the form of Portuguese traders in 1543. At first the Portuguese were regarded by the Japanese as mere curiosities. But in 1549, the recently-formed Jesuit Order began sending missionaries to Japan, followed within a few years by Spanish Dominican and Franciscans. Ostensibly, they were there merely to spread the Word of God to the heathen Japanese. In reality, the missionaries were the advance scouts of the Portuguese and Spanish Empires, and they were on the lookout for ways to gain political and economic influence, with the ultimate aim of subjugating Japan as a colony.

Although the Japanese had been focused largely on their own domestic issues during this time, there were large numbers of renegade Japanese pirates operating in the western Pacific, and they were aware of what was happening in places like China and Java. In particular, as the Jesuits and Franciscans appeared in increasing numbers over the years, the Japanese were well aware that the European Catholic priests were playing a large role in the Spanish takeover of the Philippine Islands. So, although a small number of the Japanese daimyo converted to Christianity, most were wary of the missionaries and kept a close eye on them. They had no intention of allowing the Europeans to dominate Japan.

But the Europeans did have one thing that the daimyo were extremely interested in–guns. The matchlock muskets carried by the Portuguese and Spanish represented an enormous leap in military power over the traditional samurai armies, armed with spear and sword. Two daimyo in particular, named Oda Nobunaga and Toyotomi Hideyoshi, were interested in obtaining this technology. Currying favor with the Jesuits, they managed to buy a number of matchlock muskets, and set their blacksmith retainers to work making duplicates of them. Soon the technology had spread throughout Japan.

Using their superior skill with these weapons, as well as intelligent strategy and political maneuvering, Nobunaga managed to conquer or absorb most of the other feudal daimyo under his rule, a process that was then continued by Hideyoshi. In the year 1600, however, another powerful and cunning daimyo, Ieyasu Tokugawa, defeated the remaining forces of Hideyoshi (now commanded after his death by Misunari Ishida) in the Battle of Sekigahara. With that victory, Tokugawa became the unchallenged ruler of all Japan, ending the civil wars and unifying the entire country under his control. To maintain the polite fiction that the Japanese Emperor continued to rule by divine right, Tokugawa had himself awarded the old feudal title of Shogun(“Great Barbarian-Fighting General”) in an Imperial ceremony in Edo. The Tokugawa Shoguns would rule Japan for the next 250 years. As one of his first acts, the new Shogun promulgated a set of laws regulating virtually every aspect of Japanese society to insure that no new opposition would appear to his rule. He enforced the new social order with a huge government bureaucracy and his own secret police.

Having dealt with his Japanese rivals, however, Tokugawa still recognized that the Europeans remained a threat not just to him, but to the independence of Japan itself. By 1600, the Portuguese and Spanish had been joined in Japan by the Dutch and the British. Some 300,000 Japanese, mostly from the peasantry, had converted to Christianity–the largest number outside of Europe.

When Ieyasu Tokugawa retired in 1605, his son Hidetada took over the office of Shogun, though Ieyasu remained the real power behind the scenes until his death in 1616. To remove the potential European threat, Tokugawa acted in a manner that was, characteristically, direct, to the point, and brutally efficient. In 1606, to remove any potential disloyalty in his own people, he outlawed the practice of Christianity. By 1609, the Shogunate’s police had begun arresting and executing Japanese Christians (who were known as “Kirishitan“).

Finally in 1636, the Shogunate, now under Hidetada Tokugawa’s son Iemitsu, took the step of isolating Japan completely by expelling all of the Europeans, allowing only a small handful of Dutch traders (who had never attempted to spread their religion into Japan) to remain in the city of Nagasaki, and forbidding any non-Japanese to land on the islands or any Japanese to leave them, under pain of death. And the campaign against Christianity was stepped up. Thousands were executed, and thousands more were deported or forced to leave Japan.

In response, the Kirishitans launched what became known as the Shimabara Rebellion. About 40,000 strong, the rebels occupied an abandoned castle on the Shimabara Peninsula near Nagasaki and ran rampant for a short while, destroying Buddhist temples and attacking officials of the Shogun. Within four months, however, the rebellion was crushed by an army of 10,000samurai dispatched from Edo, which surrounded the Shimabara stronghold, starved the rebels out, and slaughtered them after they surrendered.

The Shogun then forced everyone in Japan to publicly renounce Christianity by spitting and stepping on a painting of Christ or the Virgin Mary. Those who refused were executed. Those few who escaped became known as Kakure Kirishitan, or “hidden Christians”. They practiced their faith in secret and lived in constant fear of the Shogun’s secret police.

Christianity remained illegal in Japan for the next two centuries. Only in 1853, when American Admiral Matthew Perry forced his way into Tokyo Harbor, were foreign Christians allowed in. After the Meiji Restoration in 1868 removed the Tokugawa Shogun from power and restored the Emperor as the ruler of Japan, the ban on Kirishitans was finally lifted. Emperor Meiji, recognizing that the centuries of isolation had weakened Japan and placed her far behind the European nations in terms of social, political, economic and military strength, now threw the doors open to Western technology and ideas. In the space of just a few decades, Japan was transformed from a feudal agricultural relic to a modern industrial power.

But the Shogun’s war on the Kirishitans had a lasting effect. Today, less than 1% of Japan’s population professes Christianity.

2 thoughts on “Kirishitan: Christianity and the Japanese Shoguns”