Just before the Civil War, New York was the largest city in the US. To enhance its reputation as an international cultural center, the city decided to duplicate the expansive public parks that were found in London and Paris, and in 1853, the state legislature authorized the city to obtain 700 acres of land in the center of Manhattan for use as a public park and common space, under the management of an appointed Parks Commission. And from this, according to the claim, appeared America’s first zoo. 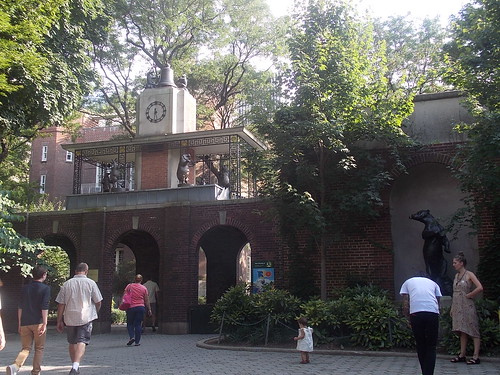 The selected area for the park was low-lying and swampy, with large rock outcroppings scattered around. After evicting some 1600 people living there, including German farmers, Irish pig-keepers, and a small African-American community, “Central Park” was established in 1857. In 1862, additional land was obtained which expanded it to its current 843 acres.

There was no zoo in the original plans for the park, but by 1859 an informal animal collection had appeared anyway, made up of various animals donated to the Park by local residents, including some swans and ducks, a porcupine, a raccoon, three bald eagles, several cockatoos, a young alligator, and a bear cub that was left with a startled city employee as the Park was being constructed. These animal gifts were later housed in a building on Fifth Avenue and watched over by a disabled Civil War veteran.

The city decided to expand this impromptu collection and turn it into a permanent zoological garden, and in 1861 the state legislature authorized 60 acres of the Park to be earmarked “for the establishment of a zoological garden” (although in the end only 6 acres were actually set aside for the zoo). A formal charter for the “Central Park Menagerie” was issued in 1864, with local resident William Conklin as its Director. The zoo was first planned for the spot where the American Museum of Natural History is now located, but during the Civil War it was placed near the Arsenal, where it remains now. A number of Victorian-style stone buildings were constructed to house the animals. Today, the Central Park Zoo claims the title “America’s First Zoo”—a title it still disputes with the Philadelphia Zoo, which was chartered in 1859 but did not actually open until after the Central Park Zoo did.

The zoo’s collection quickly grew. Telegraph inventor Samuel Morse donated money and a collection of animals. General George Custer donated a rattlesnake, and Civil War General William T Sherman donated three African Cape Buffalos that his troops had captured from a menagerie in Georgia. A pair of donated South American Peccaries produced the first offspring to be captive-born at the zoo, in 1866. Over 250 animals were obtained in the zoo’s first two years.

William Snyder, who had worked with the Ringling Brothers Circus as an elephant trainer, became the zoo’s lead animal keeper, and he began a program of exchanging animals with other zoos. Snyder also obtained the zoo’s first Indian Elephant, named Hattie, from Carl Hagenbeck. By 1873 some 3000 people a day were visiting the zoo, and this increased to 8000 a day by 1902.

In 1874, the New York Herald newspaper ran a story on its front page declaring that dozens of animals, including lions, rhinos and leopards, had escaped from their cages at the zoo and were rampaging through the city, with 49 citizens already dead and over 200 injured while National Guard units had been called out to kill the beasts. As the story’s very last paragraph revealed, it was a hoax—or, more politely, a satire, written by a staffer who said that he had seen a leopard “almost escape” while being transferred to its cage at the zoo, and he wanted to call attention to what he considered unsafe conditions with “a harmless little hoax, with just enough semblance of reality to give a salutary warning.”  Residents who didn’t read all the way to the end of the article were panicked—many locked themselves inside and waited for the terror to end. The “Central Park Menagerie Escape Hoax” became one of the most notorious media hoaxes of the 19th century.

In 1934, the city, at the urging of Parks Commissioner Robert Moses, decided that the small buildings and cramped cages were inadequate, and applied to the Federal Government for funds to rebuild the entire zoo, using money and workers from the WPA (the Depression-era government works program). The new buildings were cutting-edge for their time. The center of the new layout was the Sea Lion Pool, which was an open-air enclosure designed by local architect Charles Schmieder, who took the then-unusual step of actually studying the habits of wild sea lions to try to duplicate their conditions as closely as possible. The Sea Lion Pool is still in use today. Other buildings, with larger more spacious cages, were laid in a rectangle around the pool. These were designed by architect Aymar Embury II, who had just finished designing the Triborough and Henry Hudson Bridges.

The reconstructed zoo re-opened in December 1934, after just eight months of work, in a ceremony in which former New York Governor Alfred E Smith, who lived across the street from Central Park, was designated as an honorary zookeeper. The Parks Commission announced that emphasis would now be placed on displaying healthy animals in cleaner and more humane conditions.

But despite these good intentions, budgetary problems plagued the zoo and conditions steadily worsened over time through benign neglect. By the 1950’s, wealthy residents of nearby Fifth Avenue were complaining about the noise and smell that was coming from the zoo. In 1961, a Children’s Zoo was added with pigs, llamas, ducks, chickens and penguins, funded by a donation from Senator Herbert Lehman, but by the mid-1960’s the entire zoo was outdated, squalid and substandard, and became the target of public criticism. Even the new head of the Parks Commission, Gordon Davis, called it “a Riker’s Island for animals”.

Finally, in 1980, the Central Park Menagerie (along with the smaller Queens Zoo and Prospect Park Zoo) was transferred from the city’s Parks Commission to the nonprofit New York Zoological Society, which already managed the Bronx Zoo. The menagerie was closed down for a complete rebuild, funded in large part by a donation from Readers Digest publisher Lila Acheson Wallace. The Sea Lion Pool was expanded and the Polar Bears were given a new enclosure, but it was decided that there was no room for a proper enclosure for elephants, bears or rhinos, and these animals were all given to other zoos. The rectangular layout of the zoo was kept, but now each building was redesigned by architect Kevin Roche (whose credits included the Metropolitan Museum of Art and the United Nations Towers). The Bird House became the new zoo gift shop, and the Monkey House became the Zoo School educational center. The new animal enclosures were organized within different areas grouped by ecosystems, with the old barred cells replaced by spacious glass or open-fronted habitats. In all, some $35 million was spent on the reconstruction.

In August 1988, after five years of work, the new facility opened as the “Central Park Zoo”. Its “naturalistic” exhibits featured the new Sea Lion Pool as well as a rebuilt Polar Bear habitat and a Japanese Snow Monkey island. (The Sea Lions and the Polar Bears are the only two species that have been in the zoo continuously from its founding in 1864.) To help pay for the construction costs, and to provide a steady source of funding for the zoo, an admission fee of $1.00 for adults and $0.25 for children was charged (up to now the menagerie had always been free to the public).

Since then, the zoo, despite its limited space, has added two more features. The Children’s Zoo was expanded and updated in 1997, and in 2009 the Snow Leopard Exhibit was opened, with three leopards that had been transferred from the Bronx Zoo.

Today, the Central Park Zoo receives about 1 million visitors per year. Because of its small size, the zoo functions solely as an exhibit, with the aim of “Connecting People to Wild Nature”. The Zoo is managed by the Wildlife Conservation Society (formerly known as the New York Zoological Society), which does most of its captive breeding and conservation work through the Bronx Zoo and the New York Aquarium.